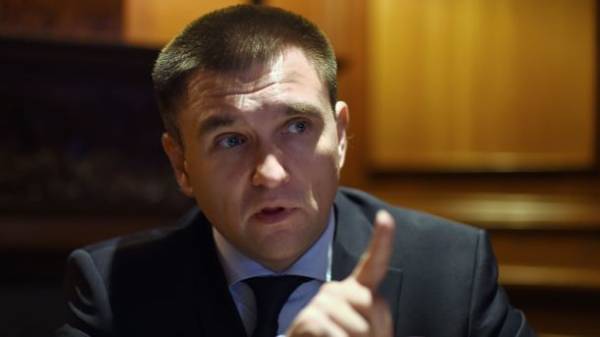 The Minister of foreign Affairs of Ukraine Pavlo Klimkin noted the discrimination against Ukrainians by Russia in the occupied Crimea and urged the world to keep the pressure on Moscow until it frees Ukrainian land. He stated that in the framework of the 34th session of the UN Council on human rights on the question of the occupied Crimea.

According to him, the annexation of the Crimean Peninsula is a flagrant violation of the Budapest Memorandum.

“The occupation of Crimea is a gross violation of the Budapest Memorandum. Tomorrow the UN celebrates the world day without discrimination. The Russian-occupied territory of Donbass and the Crimea is the territory of continuous discrimination, where there are systemic violations of human rights, Crimean Tatars, Ukrainians” – wrote about this on his page in Facebook Vice-the speaker of the Parliament Irina Gerashchenko, which is also present at the conference.

He also during the conference, appealed for peace, urging them to put pressure on Russia on the issue of release of political prisoners and to keep the sanctions until the full de-occupation of Crimea.

We will note, today in Geneva (Switzerland) hosted the United Nations conference on the Crimea, at the level of foreign Ministers, which was initiated by the Ministers of foreign Affairs of Ukraine, Lithuania and Latvia.

Earlier Pavlo Klimkin said that the UN should not fear a more proactive approach in the settlement of the conflict. He believes that the UN could increase its political presence to resolve the conflict in the Donbas.