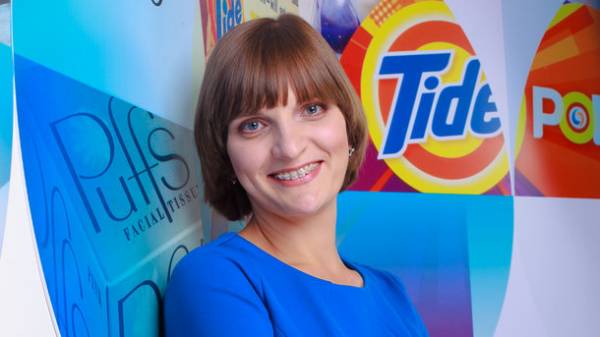 – Tell us what started your career in P&G that brought you to the position of Director of the plant in Borispol?

In Procter & Gamble I came 12 years ago straight from College. This choice was not accidental – I had my own educational strategy. I received my education in the field of control of complex technological systems and decided to try yourself in the role of engineer on a major production. Of course, at that time I could not think that becoming the first female engineer at the company, in 10 years I will be the first woman to lead P&G plant in Eastern Europe. Over the years I assumed several managerial positions, has worked in Ukraine, and the United States, but the main thing is to get diverse experience. I ran new lines, managed supplies, managed the business planning of the region, rebuilt the distribution network. But I was always confident that in the end the main goal of my work is to make people’s lives better. Moreover, that same principle works and the company itself.

– How did the plant during this time?

– We never stand still. Since P&G in 1997, bought the plant, it continuously invests in its development. They include the modernisation of equipment and improvement of the system of quality control and increase capacity, so we expanded the range of products. It has its benefits. For example, in 2015 we are the first in Eastern Europe received the status of non-waste production. That’s quite an achievement, considering how important in the world today is a concern for the environment.

How many people work under your supervision?

– About 200 people. The plant operates around the clock, 7 days a week, and maintain such a fast pace difficult. It is difficult to find the strength to overcome the next challenge. In such moments I go to the shop. Looking like hundreds of people clearly and efficient at your job, seeing the result of their labors on an Assembly line, I am charged with positive energy, you know that all our efforts are not in vain. Our team inspires me.

– Tell us about the products that plant produces.

– I often heard the stories of mothers and grandmothers about how difficult it was for Soviet women to take care of personal hygiene. So very glad that now, largely thanks to our products, this problem is forever gone. Our factory manufactures feminine products such brands like Discreet, Naturella and Always. We provide not only the Ukrainian market, but also export products to other countries.

– What innovations are implemented in production? What is their uniqueness?

– As I said, first of all, our production is unique in that it has the status of a completely waste-free. For example, of our wastes are made of special pellets that other companies use for heating. In addition, over the past 5 years, we have significantly reduced the consumption of water, electricity, carbon dioxide emissions and is very energy-efficient steel enterprise. We carry out energy audits, aiming to become even more effective.

Note that eliminating waste and saving resources is one of the primary tasks of our company, but also the entire production of Procter & Gamble.

– What did you get to America? What are the major discoveries you made there? What experience there was most helpful?

– Work in USA allowed me to take another look at the world, to understand that the rules can change, and you need to be able to adapt to it.

Before traveling to the United States, at a special training we are even warned that the American culture is very different from ours. And I know this from my own experience. For example, there is not to say directly that your idea or suggestion is not entirely successful. Will listen to you, even praise you, but make it your own. Another interesting feature is need very detailed and precise to formulate each task, otherwise it will not perform.

But after you delve into all the nuances of the local mentality, get comfortable, you begin to understand that, in principle, we’re not so different.

– The plant somehow helps the town, where is located?

– Yes, because for most of our employees Boryspil hometown. Therefore, we cannot stay aside from its problems and needs. Provide financial assistance, share their products, office equipment to schools, kindergartens and other institutions.

If to speak about Ukraine as a whole, P&G in such a difficult time for the country trying to help the most vulnerable segments of the population. This orphans and displaced families, and simply those who find themselves in a difficult financial situation. Thus, only in 2015-2016 P&G has allocated to the charity in Ukraine more than 1 million 200 thousand dollars and helped more than 500 thousands of people.

Note that we do not just give money and products. Our employees are personally involved in various projects. Collect money, buy gifts and check on children living in orphanages, pack hygiene kits for the displaced.

– What is the company’s contribution to the economy of the country?

– I will say without false modesty that he is quite impressive. First of all, Procter & Gamble employs more than 680 people in Ukraine, of which about 200 works in our factory. The company continuously invests in improvement of working conditions and training of employees, and the development of the company. Over the years, in Ukraine, P&G has invested more than $ 300 million. While P&G is the largest taxpayer only for the 2015 year, the company transferred to the budget over 1 billion UAH. In General we can be proud of.