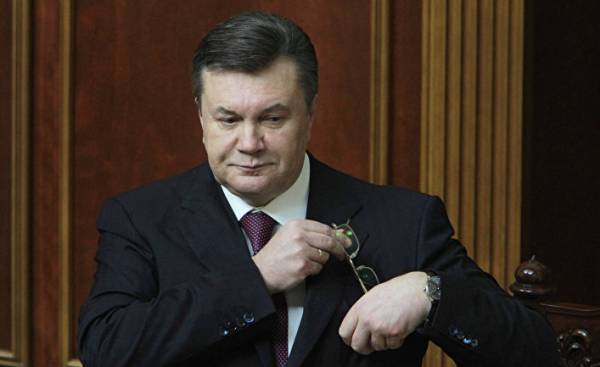 The building in the center of Moscow, sixth floor, living room with wood-panelled walls. Sideboard with crystal glassware, white chairs Bourbon on the wall — a large clock that says Made in Korea, and the door — a huge number of bodyguards. In such circumstances, guests are greeted by a man, only occasionally appearing in public — Viktor Yanukovych — deposed three years ago the President of Ukraine.

24 February 2014, Yanukovych fled to Russia. He is now 66 years old, recent years have not gone unnoticed — in the face he lost a lot of weight. Basically, Yanukovych lives in the South, in Rostov-on-don. However, two days ago, he came to Moscow to talk about his vision of the situation in their homeland, in Ukraine. “And I want to explain why I did what did,” he says.

The conversation flows in a relaxed way, no one hot topic is not passed the discussion, Yanukovych is really ready for dialogue. It comes to Vilnius and the EU summit in the fall of 2013, where he suddenly refused to sign the Association agreement with the EU about the uprising on the Maidan, which he thereby provoked. Also mentioned the mediation efforts of the German Minister of foreign Affairs, shootings in the city centre, and his escape.

Yanukovych even himself can not convince

Much of what is said Yanukovych, is not new, but some of the details previously was not known. However, the main news this evening does not constitute the details of those fateful days. And something else.

After all, three years after the uprising on the Maidan, which killed more than 100 Ukrainian citizens and law enforcement officers, still no answer to the critical question: how peaceful protest could suddenly escalate into a bloody extermination? This evening, to some extent, brings us closer to the answer.

Man sitting behind this Desk, thought-provoking. And not because of his political views, but because of his behavior. The further you talk, the clearer it becomes: Yanukovych is not confident, he can not himself convinced of what he says. He speaks slowly and at length, lost in the details sometimes interrupt the course of its reasoning. However, he smiles, and not for the sake of pretense, and to make a good impression, because Yanukovych is constantly trying to gain his approval. If the discussion becomes difficult to lead, he is confused at the inconsistencies and trying to get out of the situation.

And suddenly it becomes clear that this is Viktor Yanukovych was the “slave”, this person quickly begins to experience difficulties getting into “heavy water”. Occupying the post of President of his country, he was clearly in the wrong place at the wrong time.

It becomes clear, when the President starts talking about the initial stage of the uprising on the Maidan, mainly about the events that occurred on the night of 30 November 2013. Why then Ukrainian special forces hurried to the square and beat protesters with batons when the square is only unarmed students? That night wounded about 80 Ukrainian citizens.

The former President first tries to transfer the responsibility for the incident on “radicals”, who allegedly provoked the police. Responding to further question on this subject, he changes tone and begins to tell about the intrigues in his own immediate environment. The head of the presidential office, who did not go with him to Vilnius, under the pretext of illness and instead, Kiev took the reins in their hands, and together with the oligarch Dmitry Firtash planned to disperse the Maidan. Yanukovych also tells about the Director of the national security Council of Ukraine, assures him that in the city everything is quiet.

Own escape, he gives all the more tragic

Yanukovych claims that he allegedly learned about the night clashes on 1 December, after the first set of the morning playing tennis. When he wanted to contact the head of his administration, he deliberately did not respond to calls and at the same time announced through the media on his resignation — all in order to distance themselves from Yanukovych.

Thus, behind Yanukovych, many conducted their own policy. It was the people who used the indecisiveness of the President and prevent the escalation of the situation in Kiev. Not so absurd explanation.

If you note the time that Yanukovych is spending on detailed discussion of particular topics and to determine thereby that bothers him the most, we will see that the leader of the prosecution of the former President that he in February 2014 cowardly disappeared from the country, as well as the false allegation that he had multiplied his wealth during his tenure as President.

His escape from Kiev Yanukovych gives all the more tragic. Scoundrels “wanted to kill me and my wife,” he recalls, “I no longer needed alive.” He talks about the alleged 10 thousands of people surrounded the residence of the reservoir on the Dnieper North of Kiev and about the ships that were to attack from the side of the reservoir.

“I did not abandon his post,” he urged. “I was in Ukraine, I just cut off from the media, blocked and chased me across the country”. He talks about how initially went to Kharkov, and then from there flew to Donetsk by helicopter. That there at the direction of the flight control of military aircraft, he was forced to change his plans, but Kiev has prevented the takeoff of his plane from the Donetsk airport.

About how he was trying to get to the Crimea by land, and almost got ambushed at the city of Melitopol. “Was there waiting for 100 people with two heavy machine guns. They had cut off my column and shoot them all”, — said Yanukovych. “One of the soldiers at the checkpoint on the phone warned my men, so we promptly stopped.”

Yanukovych difficult to accept that his flight from the Ukraine, even in Russia is estimated differently, that here he is considered a coward. He had not fled his post, almost begging, keeps repeating the Ukrainian ex-leader.

Yes, he met with the oligarch Rinat Akhmetov and discussed with him everything was still possible to discuss. Namely, the creation of another Ukrainian city of contraviesa, in the end, for this he has already gained half of the Cabinet. But here, Yanukovych is again the excuse this time, even quite understandable: “It would lead to civil war.”

And all the wealth attributed to him? “All a lie. I have never had a foreign account and land”. Widely discussed in the house on the Kiev sea he allegedly gave former President of Ukraine Leonid Kuchma, and later he bought in their savings. Over three million hryvnias or 200 thousand dollars.

He is so long and so complicated tells the story associated with this house property relations that he, in the end, loses the thread of his story. The same thing happened with another, much more important issue. It sounds as follows: whether or not You considered the possibility of Russian troops in Ukraine?

No, — replied Yanukovych. Putin did not make him such proposals, and he did not discuss it with Putin. Note the question was different. And there’s a photo of the letter in which he asked the Russian President about such assistance. This letter is a fake?

“As if to say,” reluctantly meets Yanukovych and I think he is ready to break the handle, which holds in his hands. Then he scribbles a note on a white sheet of paper lying before him, as if trying to win time. “No, it’s not fake, finally he admits, “but this is not an official decree to let in the troops. It was a statement about their “use”. Different things I this letter is already long forgotten. By that time I already did not have the authority, they have selected. If I was President, and as a simple citizen… legally it makes no sense. Trying something now to dig up and attribute to me — it’s a farce.” More confused the conversation simply cannot be.

Indeed, the letter is dated March 1, 2014, when Yanukovich was removed from office. However, at that time, he continued to insist that is the legitimate President. The text of the letter is absolutely clear: “As the legally elected President… I appeal to the President of Russia with a request to use the Armed forces of the Russian Federation to restore legality, peace, stability, and protection of the population of Ukraine”. The Kremlin confirmed the existence of this letter.

Resourcefulness that Yanukovych shows this evening, almost pathetic. Surely he would forget all about it? Anyway, both sides are satisfied with the fact that talking about his personal life. “No, with Putin, I met only a few times. I know my problem is not his level.” He then tells about his travels in Russia. About how helping Ukrainian immigrants and their older son, providing him financial support. The younger Yanukovych’s son drowned in the lake in 2015. He broke up with his wife, where you were married 45 years, and lives with a sister of his former cook.

And, of course, he talks about his hobby — tennis. “I like to play tennis, sometimes I rent a tennis court, but now I rarely take the opportunity. You play tennis? Then you can set up a meeting…”

At some point, even his assistants are tired of this conversation, they want to go home. Yanukovych friendly gets up and shakes my hand. On the table is a piece of paper lying in front of him. It Ukrainian ex-President wrote only one word: “independence”. 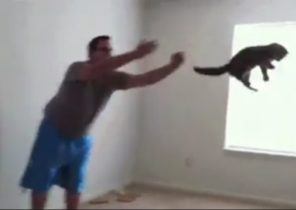