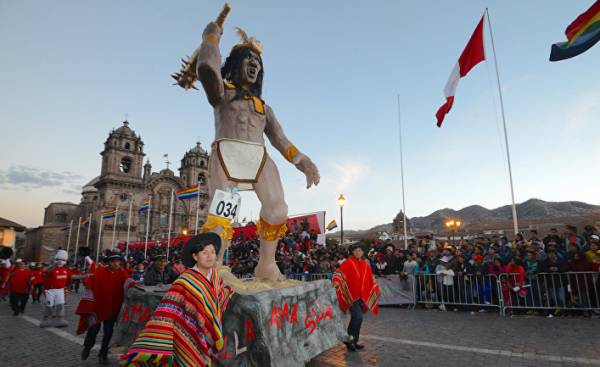 Let’s do an experiment. As we imagine the indigenous inhabitants of Latin America? What is it? What kind of landscape we see it? What is he doing? Most likely in our heads there picture with the canoe or hut? Where there is no concrete and traffic lights. It is difficult for us to imagine it, at least at first, cross a street in a big city.

But the statistics tells a different story: 49% of Indians in Latin America in the last decade moved to the city. Meanwhile, as noted in this interview, Herman Freire (Germán Freire), expert on social development the world Bank the image of an Indian citizen goes against the collective idea of what it means to “be Indian”.

El Pais: Why the indigenous people of Latin America have migrated from the territories of traditional settlement in the city?

Germán Freire: it is influenced by different factors. Often, indigenous peoples are migrating for the same reasons as other Latin Americans. In the cities more chances to get a job, get an education, to access health and other services. In Peru, for example, the probability that an Indian family would starve to 37% higher in the countryside than in the city.

But a more significant reason is usually the access to education and health care. Although primary school over the past decade has experienced unprecedented expansion, there remain serious gaps in regard to secondary and higher education. Medical services are also often unavailable in the villages, even if formally declared having access to them.

On the other hand the traditional territory of indigenous peoples are increasingly expansion on the part of agricultural and resource companies. The fifth part of the Amazon basin, for example, has a large resource potential, and 20% of the territory inhabited by Indian tribes. Internal conflicts also caused massive damage to the rural settlements of indigenous people in countries such as Guatemala, Colombia or Peru.

All these factors partly explain why to date, about 50% of the Indian population lives in urban areas. In some countries this percentage is much higher. In Argentina, for example, Indians-residents of more than 80%.

— What are the main difficulties faced by the indigenous peoples of Latin America, who decided to move to the city?

The position of Indians in the cities paradoxically, because although on the whole they live better than in traditional places of settlement, but it is also true that they are included in the city’s life in a very unfavorable conditions. Their traditional knowledge and technology are not valued on the labor market of the city, so often they can get jobs only low paid or semi-legal work, which of course negatively affects their socio-economic security.

In addition, the Indians, as a rule, are forced to settle in deprived areas where less employment opportunities and services and which are less protected from natural disasters. Indian families living in marginal areas two times more than non-Indian.

All this constitutes a serious problem for governments and institutions because inclusive strategy aimed at providing differentiated services to the indigenous population, was designed for rural communities. In fact, the image of an Indian citizen is inconsistent with the collective idea of what it means to “be Indian”. Meanwhile, the number of Indian families in cities will only increase, judging by the trends of the last decades.

In other words, cities offer the Indians a tremendous opportunity, but the flip side of the coin is that they become victims of new forms of discrimination. Regional authorities should make more efforts to develop strategies that would facilitate access, in particular to education, housing, services, without forcing them to abandon their culture and identity. In one study, the world Bank notes that self-esteem must first be cultivated to inclusive social policy was successful.

— What is the role of an Indian woman in an urban setting?

— A huge. In many cases, women are the engines of migration from rural to urban areas. For them it is an opportunity to break free from traditional roles and gain greater autonomy, although they are more likely than men to face challenges. It has been estimated that in Bolivia, Indian woman earns on average 60% less than it’s not Indian, doing the same work. There is no doubt that it is a case of double discrimination: gender and ethnicity.

But despite these circumstances, the Indian women play in the urban environment a Central role. They use their traditional knowledge and skills, such as traditional medicine. In addition, they are a kind of “anchor” of traditional culture and Indian languages for children. They are enterprising and know how to combine traditional aspects of management, solidarity and exchange, with a market.

But it is equally important and their growing participation in the public space, in decision-making at the local, state and regional level. A Prime example are the women of the Venezuelan-Colombian people, Vayu, who could hold high public, academic and other positions on both sides of the border. The woman is the axis around which revolves traditionally the culture of the people Vayu, which, of course, she brought in cities such as Maracaibo or Riohacha.

— What is the contribution indigenous peoples can make to urban life?

— A significant. The Indians have a different vision of the principles of social organization, organization of space, interaction with the environment, strategies of containment, forms of political participation. They know the local languages, principles of traditional medicine and national architecture. Using all of this can diversify the urban environment and make it more friendly.

A famous example is the participation of aboriginal people in the urban life and participate in the life of the state is the Bolivian city of El Alto. The Aymara Indians, through their traditional authority — neighborhood councils — not only played a leading role in the creation of urban space and its management, but has also become the Central force of government policy.

Less well-known examples are the suburbs of Buenos Aires and La Plata. Few people know that they focused a significant portion of the indigenous population of Argentina — about a quarter. In La Plata, for example, in the area of the Islas Malvinas is home to a community of the people of kom, which has managed not only to take its rightful place, but also to achieve their full inclusion in the urban environment. Almost complete absence of outside support, the Indians whom he built a house, organized common space according to their own views on the principles of solidarity and dormitories, have a collective responsibility for the nurture and upbringing of children, has organized curricular and extra-curricular classes to learn the native language and their culture. There are such examples all over Latin America, but so far they have not attracted enough attention and went unnoticed.

And this is the task to be solved first. We do not have sufficient knowledge about the needs and opportunities of the indigenous population in urban areas, because until recently, this topic was not on the agenda of development of the region. The report “Indigenous peoples in Latin America in the XXI century”, which we released last year, offers to begin to perceive indigenous peoples in the context of their heterogeneity. Development models and analytical tools that we use today to satisfy their needs and requirements, do not consider the fact that half the indigenous population of the region live in urban environments. There are also multiple forms of marginalization that can be superimposed on one another, because not the same thing to be a native American female, child, old man etc.

However, I am convinced that the inclusion of indigenous peoples in the development of the urban environment we will all benefit. In some cities they make up a significant part of the urban population, which can make a great contribution to the local economy, making decisions, finding solutions to the critical problems of our cities, such as reasonable use of natural resources or civic activism. The biggest wealth of the region has always been its diversity, which is why it makes sense to take into account the heterogeneity of the views and proposals made in the draft urban development of the region.