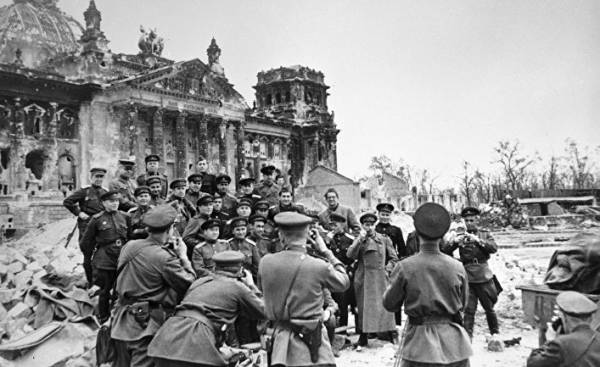 The Russian defense Ministry responded to the criticism addressed to the district for training, where young Russians can train in the capture of the Reichstag building in Berlin — during world war II.

Young Russians have during their military training to capture the true fighting spirit. Therefore, the Ministry of defense of Russia decided to build a mockup of the Reichstag building in Berlin, which Soviet troops had stormed during the second world war.

The layout of the building of the German Parliament will be part of the new object in the educational and training Park “Patriot”, which is built for training yunarmeytsev near Moscow.

“We are building a copy of the Reichstag in the Park “Patriot”. Not full size, but such that will give unerman able to storm not horrible, but this object,” — said Shoigu.

There sit the German representatives of the people

In Germany, the Russian plans were regarded with interest, because today in the building of Reichstag deputies of one of chambers of Parliament, the Bundestag. This means that the Russian yunarmeytsy will be able to practice the assault on the layout of the building, which now work with German representatives of the people.

Russian plans to “surprise and speak for themselves,” said Demmer Ulrike (Ulrike Demmer), a spokesman of the German government in an interview with news Agency DPA.

“It speaks of the deterioration in the attitude of Russia to Germany. This creates a negative image of Germany,” said Stefan Meister (Stefan Meister) of the German Institute of foreign policy in an interview with radio Deutsche Welle.

According to him, the plans reflect the official return of Russia to glorify the military victories of the Soviet Union.

According to German MEP Elmar Brok (Elmar Brok), the main question is: in what form the building will be built, in the storming of which to practice Russian huarmaca.

“If there is a reconstructed building that the Red Army stormed in the battle with Hitler, I have no objection. But if there is a replica of a modern bulwark of democracy, it is unacceptable,” said Elmar Brok in an interview with radio station.

On Friday the Russian defense Ministry responded to the criticism concerned what is happening to the German experts. Press Secretary of the Ministry has accused critics to be sympathetic to Nazism.

“It makes you reflect on a representation of those who founded the Third Reich, they stick really,” said Igor Konashenkov about the critics in a press statement issued by the Ministry of defence in Moscow.

In Russian and Soviet historiography, the capture of the Reichstag in Berlin in the last days of the war, he became a symbol of victory over Nazi Germany. The construction of the layout of the building for training should be seen as a way to support “the Patriotic education of young citizens”, — says major-General.

The role of the Soviet Union and Soviet leader Joseph Stalin in the victory over Nazi Germany have become increasingly important in the official historiography during the reign of Vladimir Putin in the last 17 years.

The Russian youth movement, “Uname” was created in 2015 to provide military training to children aged 11 to 18 years. According to the Ministry of defense, “Uname” has 42 thousand people.

“The goal of the movement is to revive the glorious traditions of children’s and youth organizations,” — says the organization’s website.