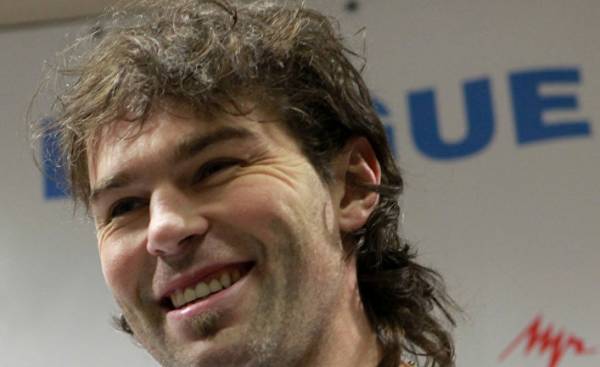 Czech hockey star Jaromir Jagr turned the 45. One of the holiday gifts was the title of the second most effective player in the NHL. On account of his 1899 points. More scored only Wayne Gretzky. Now Jaromir Jagr says that he intends to play to 50 years, although in the past several times thought about ending his sports career.

During his professional life Jaromir Jagr overcame the set of vertices. He was lucky twice to win the Stanley Cup in the “Pittsburgh penguins” earned several individual awards in the NHL, to win 2 gold medals at the world Championships, but also Olympic medal in Nagano.

In the NHL from 18 years old

In the overseas League Jaromir Jagr was in 1990 at 18. Then English he still brought problems, and in his dreams he often saw his hometown Kladno. To overcome a strong desire to return home, as he often spoke on the phone to my parents, failed.

So Joseph Saiz reminisced about the first season of Jaromir Jagr in the first team. During the summer training mandatory item was the Bicycle races: “Hockey player Milan New was a legend, an icon. Well, a young Jagr on the bike went past. At one stage Milan are New and Jaromir Jagr had a bet on who of them will come to the finish line first. Who do you think won? Of Course, Jagr. To the beginning of the stage, he came on a bike attached to the wheel of the old hand horn. Just a country girl! Milan are New, of course: “What this rookie can do? I’ll race you!” “Do not overtake!” Of course, not overtaken. Jagr just past them and whistled. And then the New Milan he drove around with the pump in hand for something he didn’t do breaks”.

In 1998, Jaromir Jagr has been the star of the NHL and a leader during the matches of the Olympic games in Nagano, when the team of the Czech Republic entered a historic victory in the pages of its Chronicles.

“Right now I have on the neck of this coin and no. I gave her father. But what happened was wonderful. I never even dreamed about it. Leaving at age 18 to play in the NHL, I was thinking that neither the world championship nor the Olympics I participate will not succeed. But suddenly the opportunity was there, Yes, the Czechs and won! This is wonderful!” — Jaromir Jagr shared his experience with reporter of Czech Radio after winning in 1998.

Career of the hockey player was successful, but a year after Nagano, when the Jaromir Jagr was just 26 years old, almost stopped: “When I left for America, he set a goal — steel best hockey player in the world. Or at least try to be. Everything went on the side, I am 100% dedicated myself to hockey. Now, 9 years later, I think I get where sought. Now I would like to start something new — I would like to graduate from the chosen secondary school, and then to go to College, and correspondence study here in the Czech Republic”.

Maybe Jaromir Jagr and sought to leave the ice arena, but the hockey didn’t let him go. With the stick in the hands of Jaromir Jagr continued to fight for the honor of the Czech national team and clubs of the overseas leagues. The four seasons has played in Omsk Avangard. Plays Jaromir Jagr and sow day.

What is the secret of athletic longevity?

“Jaromir is one of the smartest players in history. He not only knows how to adapt to the changing every 5-10 years the style of hockey, he is still able to guess the trends that soon. He is constantly training. In the summer I saw him almost every day. He either went to the kickboxing or the ice arena… All summer he was focused to train the speed and dynamics. At 45 years old to possess such a will is something amazing,” admires former NHL player Jiri Fischer.

And Jaromir Jagr gambling. In all! “I was a gambler (poker player — approx. ed.). I stay to them now, although not as gambling. I like the excitement. And I was able to challenge everything — the speed or rate. It’s my life — the existence on the brink, you can fall on one or other side. I’m getting aroused”.