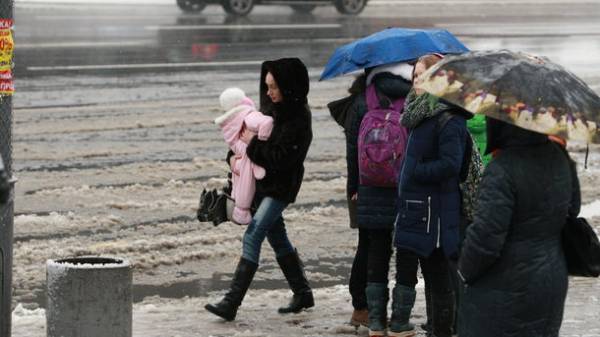 The last week of winter will be warm, but wet — according to forecasts Ukrgidromettsentra, almost the entire territory of Ukraine will pass rains with wet snow.

Precipitation will bring a small cyclone of the Atlantic, but for serious frost of his power is not enough. However, the night decrease temperature to 1-2 degrees below zero is fraught with ice on the roads and streets and freezing the wires, and warming the afternoon to 3-5, and in the southern regions and up to +10-12 will bring sleet, warns forecaster Ukrgidromettsentra Natalia Didenko. In the Carpathians there is still a danger of avalanches. Only on Friday afternoon over the country for a while will the sun, as the clouds go North-East under the influence of South-West winds. But at the weekend the bad weather will return.

According to Didenko, this is typical weather for the last week of February: “we Can say that there is a pre-spring rehearsal in the atmosphere”. Weather sites also promise warming with little rain in February and the first week of March for “a day or two of rain, two days of solar”.

The national forecaster predicts Leonid Gorban, night frosts to –8—10 degrees back on the week after March 8th. In the present spring will come only after March 15: 12-15 a day to 3-5 a night.