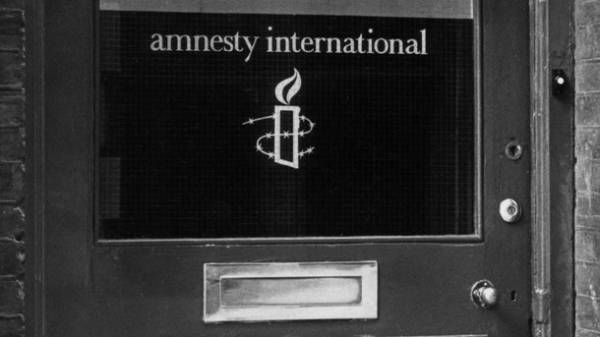 International human rights organization Amnesty International presented the annual report on the situation of human rights in the world. The authors recorded the growth of aggressive policies worldwide, reports BBC.

“Shifts in global politics that occurred in 2016, which include the election of the President of the United States Donald trump, Brexit in the UK and the politics against migrants from the Middle East, had a negative impact on the situation of human rights,” says the 170-page report.

For a description of the problem human rights activists used the term, not previously encountered in their annual reports – “politics of demonization”. According to human rights activists, in 2016, politicians worldwide have used the “language of enmity”, and it was comparable with the level of aggressive rhetoric of the 1930-ies.

“2016 was a year when too many politicians have resorted to destructive and divisive manipulations of collective identity,” said Secretary General of Amnesty International Salil Shetty.

UKRAINE, RUSSIA. The President of Ukraine Petro Poroshenko has earned praise from Amnesty conducted with the support of the authorities of Kiev in June 2016, “March for equality” in support of LGBT rights.

Criticism in the address of Ukraine is connected with the fighting in the East of the country. “The Ukrainian authorities and the self-proclaimed .”DNR” and “LNR” illegally detained people suspected of supporting the other side, in order to use them in prisoner exchanges,” – said in the annual report.

Independent media and civil society activists in 2016 have not had the opportunity to work in the so-called “DNR” and “LNR”, said Amnesty International. “Harassment and threats faced and the media on the Ukraine-controlled territories, primarily those whose editorial policy was considered by their critics as Pro-Russian or proseparatist”, – the report says.

We consider separately the situation with freedom of speech in occupied Crimea. It is noted that independent journalists could not work openly. On the occupied territory is not allowed journalists from Ukraine. They unfolded on the administrative border. Local journalists and bloggers who are critical to the Russian occupation and illegal annexation of Crimea, few ventured to Express their views for fear of attack.

Russia also failed to avoid the condemnation of human rights – marked by the tightening restrictions imposed in the country on freedom of expression, Association and peaceful Assembly. Experts expressed concern about the ongoing criminal prosecution of participants of the “Bolotnaya case”, as well as the first criminal case for violation of the law on “foreign agents”.

“Together with the Syrian authorities, Russia has inflicted indiscriminate attacks and directly attacked civilians and civilian targets in Syria, including residential areas, medical institutions and pillars of humanitarian goods, which led to thousands of dead and wounded among civilians”, – the report says.

The situation with human rights in most post-Soviet countries has not changed, but Russia and Azerbaijan in 2016, a continued contraction of individual freedoms, the authors of the report.

USA. Campaign rhetoric of Donald trump, the defenders called disgusting, discriminatory, xenophobic and misogynistic. It embodies “the global trend of carrying increasingly bitter and divisive policy”, according to the organization.

“Just a month has passed since the entry of the trump to your post, and we say that the problem of refugees contemptuously, peremptorily ignored, – said the Director of the Russian representative office of Amnesty International Sergei Nikitin. We’re talking about discrimination on religious grounds in migration policy, a massive attack on women’s reproductive rights. We’re talking about the attack on the land rights of native Americans. Just 30 days the person on duty, and already, as you can see, such fears”.

Criticism of Amnesty International has been a precursor to the trump as President of the United States.

“Barack Obama leaves behind a legacy that includes many unfortunate failures in protecting human rights: the expansion of a secret program of the CIA strikes with drones and the enormous development of mechanism for introduction of mass surveillance exposed by Edward Snowden,” reads the report.