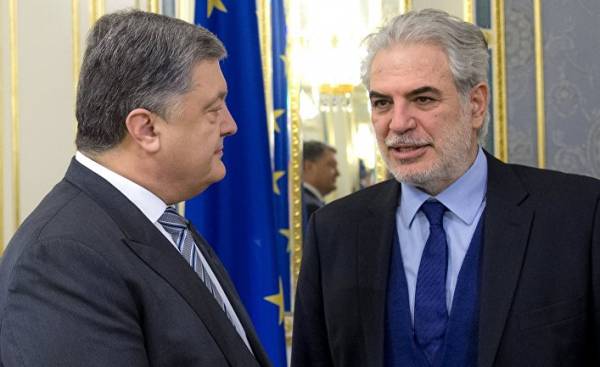 The President of Ukraine Petro Poroshenko at the meeting with the EU Commissioner for humanitarian aid and crisis management Stylianides Christ said that Russia’s recognition of fake documents, “DNR-LNR” requires the enforcement of sanctions. This was reported in the press center of the President of Ukraine.

“We are now seeing repeated violations of the Minsk agreements. We not only see violations of the cease-fire, but a completely cynical decision on the recognition of fake documents, the fake republics”, — said Poroshenko.

The President noted that “from the point of view of international law is already an element of recognition of these illegal groups and, de facto, refusal of the Minsk process, because these actions are incompatible with the implementation of the Minsk agreements. We believe that this is a very disturbing phenomenon, and it requires action up to strengthen the sanctions.”

EU Commissioner Stylianides, in turn, said that “the European Union fully supports Ukraine and is making significant diplomatic efforts for the full implementation by Russia of the Minsk agreements, which are based on absolute respect for the sovereignty, territorial integrity and independence of Ukraine”.

We will remind, on February 18 the Russian Federation has recognized a valid identity documents issued by the so-called power of “DNR” and “LNR”. The corresponding decree signed by Russian President Vladimir Putin posted on the website of the Russian President. It is noted that on the basis of documents issued by the “DNR” and “LNR”, are allowed entry to Russia.

We will remind, OSCE Secretary General Lamberto Zannier said that the decision of Russia to recognize the “documents” terrorist organizations “DNR” and “LNR” prevents opportunities to strengthen the truce.

The President of Ukraine Petro Poroshenko said that the recognition “of passports issued by the rebels, is further evidence of the occupation of Donbas by Russia”.