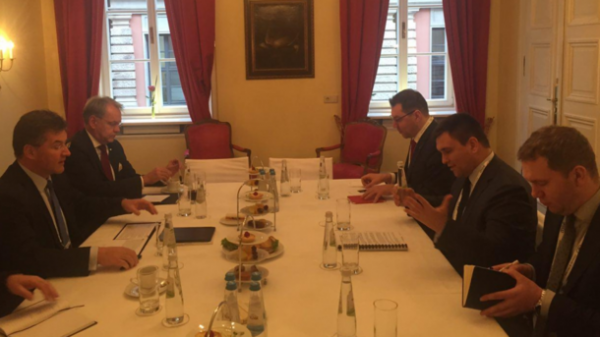 The Minister of foreign Affairs of Ukraine in the framework of the Munich conference on security issues held a meeting with the colleagues from Slovakia and Italy. About it reported in a press-service of Kazakhstan’s foreign Affairs office.

In particular, during the meeting the Minister of foreign Affairs of Slovakia Miroslav Lajcak discussed the positive dynamics of development of bilateral dialogue, the issues of European integration of Ukraine, including the abolition of the visa regime with the EU.

“Pavlo Klimkin briefed his Slovak counterpart on the worsening situation in the Donbass, including around Town, as well as continuing support from the Kremlin illegal armed groups in Donbass”, – noted the Minister, adding that the meeting was expressed position on the need to maintain sanctions against Russia.

In addition, at the meeting with Italian counterpart Angelino Alfano Klimkin had been assured of the support of Italy’s sovereignty and territorial integrity of Ukraine.

Klimkin also stressed the importance of cooperation with Italy as the future OSCE Chairman in 2018. “For the purpose of development of bilateral cooperation, the Ministers agreed to hold the next meeting of the Ukrainian-Italian intergovernmental Commission on economic and financial cooperation”, – stated in the message.

Note that Petro Poroshenko in his speech at the 53rd Munich conference said that the West should abandon sanctions against Russia.

Recall that the Munich security conference will be held February 17-19, in Germany. Its participants will discuss a number of key challenges in the field of security, including the situation in Ukraine. At this event in 2016, also held talks with foreign Ministers “channel four”.

Earlier the edition “Interfax-Ukraine” with reference to own sources in the foreign Ministry of Ukraine said that in Munich may be a meeting of foreign Ministers of the countries participating in the Normandy format.