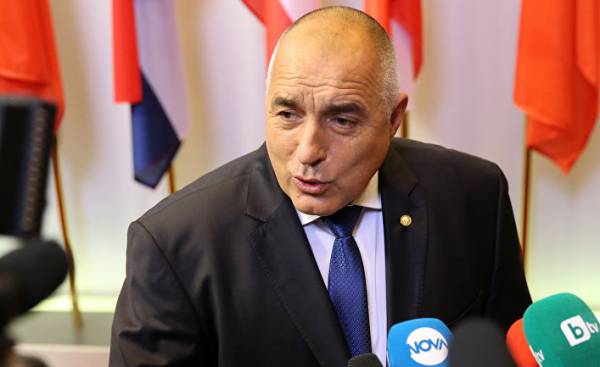 When counting 99% of the votes, “coat of Arms” received 33%, and more Pro-Russian socialists, the successors of the Communist party, 27%, reported the Central electoral Commission on Monday in the capital Sofia. In third place — “United patriots”, a nationalistic group, which is the most likely partner for the Alliance with the party “coat of Arms”, got 9.1%.

Bulgaria with a population of 7.2 million people, is a member of the European Union and NATO. The country is seeking to end the political turmoil, which caused a succession of elections, and restrained the economy. Although “coat of Arms” and the socialists during the campaign and called for the restoration of business relations with Russia, Borisov has not joined the calls for his opponent to veto sanctions block against the government of Vladimir Putin. He is unlikely to deviate from its previous course in foreign policy and Economics.

“Of course, a weak majority can be formed between the two parties, as opposed to three – or even four-party coalition proposed by the polls,” says Ciprian Dascalu, chief economist for the Balkan region at ING Bank NV. The party “GERB” less radical changes in the position of Bulgaria in relation to Russia. It will probably moderate nationalist tendency “United patriots” and perhaps will insist on fiscal discipline “despite the electoral promises of all parties on maintaining growth.”

The victory of the party “GERB” has reduced the yields of Bulgarian bonds denominated in euros due in September 2024, nearly four basis points to 1,502 percent as of 11:54 in Sofia, according to Bloomberg data. It exceeded 2% in November, when Borissov resigned after the defeat of their candidate in the fight against the configured friendly to Russia a socialist, in the presidential election in November. This was the reason for new elections on Sunday.

“The result is categorical — it reaffirms that the “Emblem” should be the leading party in the future government,” said 57-year-old Borisov, a former bodyguard. “We must have stable government and stable opposition.”

“Coat of arms” separated from the socialists on the eve of voting, and perhaps she also helped Borisov tough stance against neighboring Turkey. “United patriots” contributed to the tension, blocking the border crossings because of statements that Turkey planned to bring Bulgarian expatriates to support the party associated with President Recep Tayyip Erdogan.

Two other parties also crossed the 4 percent threshold of entry to Parliament: “the Movement for rights and freedoms”, which represents the ethnic Turks of Bulgaria, who make up 8% of the population, and “Will”, the party of businessman Vesselin Mareshki. Coalition talks will start after the announcement of official results of elections this week.

Last year Bulgaria’s economy grew by 3.4%, although it lags behind the neighboring Romania, of another state, which joined in 2007. The level of corruption in Bulgaria, Transparency International acknowledged the most high in the block. “Coat of arms” wants to keep a 10 percent flat rate income tax and a balanced fiscal policy in the poorest EU country.

“Bulgarians are betting on the preservation of the Pro-European direction of the country and do not share fully the policy of the socialists in the matter of change,” said Genoveva Petrova, Executive Director of the center for survey Alpha Research.