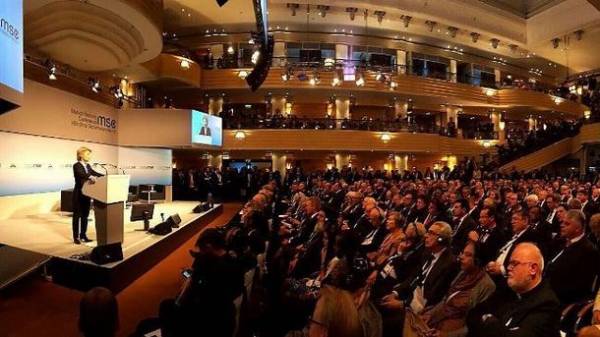 The first day of the 53rd Munich security conference was held under the slogan: “is There life after the election Donald trump President of the United States?”. It seems that the European Union was seriously scared that soon the policy of Washington can change dramatically. Inflame the situation repeated attacks of the trump at press conferences and on Twitter.

But how far he can go in his actions, because to speak and write in Twitter can be a long time? Whether the United States can review the funding of NATO and, even worse, to make a deal with the Kremlin? Even the foreign Minister of Austria Sebastian Kurz, offering to gradually lift sanctions against Russia, suddenly began to ask these questions on the sidelines of the Munich conference.

Of the claims of European politicians have tried to remove the Pentagon chief James Mattis and Senator John McCain, speaking from the rostrum of the conference. But the decision of the Ukrainian question, though he was in the top priority of the discussions and left overs. British foreign Minister, Boris Johnson agreed with the statement Poroshenko about “the revanchism of Russia”, others talked about the insatiable appetites of the Kremlin, but practical recipes so no one gave. Perhaps, except for the Chairman of the conference Wolfgang Ischinger, which encouraged States to join the “Normandy format” negotiations on the Donbass.

“Today” has collected the TOP 5 of the most striking quotes of the main participants of the first day of the Munich security conference.

Pentagon chief James Mattis: “the Fifth article of the NATO Charter – the cornerstone of who we should follow”

During the election campaign, Donald trump repeatedly called NATO “an obsolete Alliance”, which has lost its role. He also said that the United States should consider whether to come to the aid of country-party Alliance, the attacked, who pays the prescribed level of contribution to the budget of the Union (we are talking about 2% of GDP – Ed.). To date, only 5 of the 28 countries-members of NATO regularly transferred to the budget of the Alliance required amount: Poland, Estonia, UK, Greece and USA. Germany, according to their defense Minister Ursula von der Leyen, will be able to increase spending only to 1.2% of GDP.

In the European Union even began to talk about the new European counterpart to NATO, if the US suddenly turn their back to Brussels and give up on the Alliance. But it seems that the members of the new team trump on the sidelines of the Munich conference failed to convince EU leaders of the inviolability of the approaches of American democracy.

James Mattis: “the Transatlantic unity is based on European unity. We are aware of this fact in the context of cooperation between NATO and the European Union. American security is inextricably linked to the security of Europe. It is true that the European initiatives and the unity of the Alliance complement each other. Standing on the principles of our Alliance of 28 democratic countries parties to help keep the rules of the international order. The fifth article (of the NATO Charter, under which an attack on one NATO member is equivalent to an attack on the entire Alliance – Ed.) – the cornerstone, which we should follow.”

John McCain: “You must not forget America, America is with you!”

Perhaps one of the most striking was the performance of Senator John McCain at a joint with Poroshenko debate “the Future of the West: the fall or the return.” McCain is that standing did not applaud. Senator, as always, rink drove through Russia reminded the States that did not give weapons to Ukraine, and even suggested that he would become the object of criticism on Twitter trump. McCain acknowledged that very often the American President contradicts himself, and the resignation of the former Advisor to trump on national security Mike Flynn called a symptom of deep problems and chaos in the new Administration.

To shed light on the mysterious Flynn talks with Russian diplomats about the possibility of lifting the sanctions against Russia should the Vice-President Mike Pence, who will speak today at the Munich conference. As trump during his long conference at the White house did not give a clear answer to the question, had there been any such negotiations and whether the U.S. is considering the possibility of lifting the sanctions against the Kremlin.

Senator John McCain: “I have many years attending this conference, I don’t think this conference was so urgent as now. Our predecessors did not believe in the end of the story, and believed in justice, we have to continue. Europe and the world is concerned that America is losing its leadership position, all the Americans who come here think otherwise. The survival of the West is not only the struggle for material but also for moral and ethical principles. I refuse to believe that the West came to an end, I believe in the West, that we must constantly fight for the West. You should not forget America, America is with you”.

Wolfgang Ischinger: “I propose to the Administration trump to join the “channel format”

This June it will be exactly three years since the founding of the Normandy format of talks on Donbas “Germany-France-Ukraine-Russia”. But the result is zero. Progress in the Normandy and accompanying him to the Minsk format no, this is not the Kremlin wants. Russia is beneficial to constantly move their equipment and soldiers through 426 miles of uncontrolled borders, it is advantageous not to observe the ceasefire, and beneficial to treat the Minsk agreement on his own. For that, Ukraine is paying the most expensive – the lives of our children. According to the UN the war with Russia has claimed over 10 thousand lives of Ukrainians and the unofficial is more.

Ukraine has repeatedly offered to change the format of negotiations on Donbas: whether it is Budapest, whether advanced “channel” with the participation of States. But Russia has consistently opposed. And the deputies of the German Bundestag on the sidelines of the Munich security conference said that the current state of Affairs into the hands of the States, which are not officially participate in the talks on Ukraine, which means that in any moment can stop pressure on the Kremlin.

Wolfgang Ischinger: “I propose to the Administration trump to join those who work together in the so-called “Normandy format” – to Germany, France, Russia and Ukraine. in the last two years, the parties “didn’t get very far” in the issue of realization of the Minsk agreements in life. Joining channel format Washington would give new impetus to the search for a peaceful settlement of the conflict in the Donbas.”

About the possible “big deal” between Washington and Moscow say more and louder. The components of this supposedly “great deal” will Ukraine and Syria. During the last press conference in the White House trump talked about improving relations with the Kremlin even after the scandal with Flynn, whom the American media accused of ties with Russian diplomats. Mattis and NATO Secretary General Jens Stoltenberg has tried to smooth over the situation, explaining on the sidelines of the Munich conference that the rapprochement with Moscow is possible, but not on the terms of Moscow.

It seems that Washington is still not fully know who is Putin and what are the deal. If it is easy to call a war against Ukraine a “civil war within Ukraine itself”, one can only assume that he will speak about the agreements with Washington.

For the third year in a row the Ukrainian President invited to speak at the Munich conference. In 2015, Poroshenko showed the participants of the passports of the Russian military “lost” in the Donbass. This year he spoke about the revanchism of the Kremlin and why Putin hates Ukraine.

Petro Poroshenko: “I hear urgings to appease Russia, and I think it would be dangerous to move in this direction, not only for Europe but for the world. Putin hates Ukraine. He believes that Ukraine does not have its identity. He said that Ukraine is part of Russian identity. Putin wants to paint a map of Europe in Russian colors. And it would be naive to assume that he is confined to the Ukraine. We will never agree to someone behind us decided our fate. Any agreement behind our back will be cancelled and the millions of Ukrainians who have proved that they can defend Ukraine. Any transactions behind Ukraine worsen the situation. It is necessary to stop Russia and to enforce world order.”

Johnson: “I agree with Poroshenko that the Kremlin is dominated by revanchist tendencies”

Oddly enough, but after BREXIT the voice of official London in the Ukrainian question began to sound much louder. British Prime Minister Theresa may that the first of the Western politicians met with trump, we can say forced the U.S. President to declare the retention of anti-Russian sanctions. Boris Johnson at all meetings in high offices repeats commitment to Britain, the Budapest Memorandum, it would be only the will of Russia to participate in the consultations. Perhaps, Ishiguro have to offer Britain to participate in the “Normandy format”, and not the States?

Boris Johnson: “If you ask me, did the Bucharest Declaration (we are talking about the results of the NATO summit in Bucharest in 2008, where Ukraine and Georgia were denied membership in NATO – Ed.) to hybrid war against Ukraine, then I’m not sure that it is not. It would have happened anyway. I agree with Poroshenko, who said that the Kremlin is dominated by revisionist trends. We see what is happening in the Balkans, we see how to manipulate with French channels…NATO should think that cyberterrorism and hybrid warfare are a reality and we need a strategy of response, how to contain these actions. How do we know who is the instigator? These are very difficult questions that need urgent answers”.