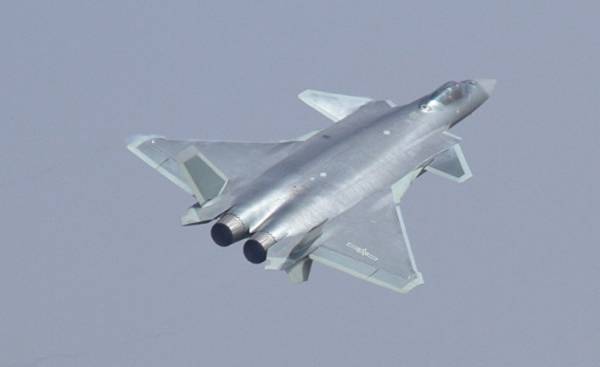 The election of a new American President took place just a few days after China officially introduced the world its new fighter J-20 “Mighty dragon”. Just seems that these two events are unrelated, because of this administration, trump will have to accept the fact that now not only Western aircraft is difficult to detect aircraft. Therefore, the hotter the controversy erupted about the future direction of development in the category of fighters.

Aircraft J-20 was first shown in December 2011 and in January of the following year he first took off, and it is believed that in the summer of 2016, China is gradually started mass production. Thus, the Chinese overtook the Russian, which is still having problems with the aircraft “Sukhoi T-50” PAK FA, so, despite the promises, most likely, the start of serial production again postponed. Of course, it is possible (even very likely) that the problems have to be overcome, and the Chinese, however, it is undeniable that the Chinese “invisible” fighters are most concerned about Americans.

I deliberately wrote in the plural, because it is not only about J-20, but smaller type FC-31. If to believe to unofficial sources, initially, this type was created at the personal initiative of the manufacturer for sales in the world market, but now FC-31 identified as a carrier-based aircraft for the Chinese Navy. But even if FC-31 remained an export option, it still could pose a threat, especially if we were in the Arsenal of countries such as Iran. By the way, there are reasons to expect that Russian aircraft will eventually be exported. In General, the Western monopoly came to an end.

The answer (theoretically) could be the aircraft the F-35 “Lightning II”, which will gradually form the backbone of the American air force and naval units of the Navy and marine corps. In addition, the aircraft are planned to be exported to US allies, it should become what it once was (and still is) beloved F-16. Unfortunately, the F-35 not so smooth, so in his campaign, he drew attention candidate Donald trump.

He criticized the draft for the incredible difficulty, delays and high costs were, at least to a certain extent, right. Trump even threatened to completely stop the program that has caused concern in some countries that are hoping for a delivery of F-35, and, on the contrary, very happy competitors that offer the fighters the lighter categories. It is primarily the Saab with its Gripen. After his election, Donald trump is not too raved about the F-35.

The new defence Minister James Mattis, on the contrary, supported the project but emphasized that he fully agrees with his “boss” that the budget needs to restrict within reasonable limits. Soon, trump met with the leadership of Lockheed Martin, after which the parties reported that they had come to a common opinion about the cost of a new series of F-35 aircraft. So, the price for one plane will be below the psychological $ 100 million. Looks like “Lightning II” saved, but not enough, because tougher and the requirements for combat aircraft of the next, i.e. the sixth generation.

Still loud statements, make those who seek the resumption of the serial production of fifth generation fighter F-22 “Raptor” and permit their export. To address this issue, the air force commissioned a study, but the question is, will the solution have sufficient political support in Congress, prevails the opinion that it is necessary to create a completely new aircraft. Or even two aircraft, one for the air force, and the second deck, for the Navy.

Command of both the armed forces agree that the planes must be different. The F-35 program, which has resulted in three variants of one aircraft, proved to be too ambitious, because I had to go to a lot of compromises, despite delays and rising costs. It is therefore assumed that future types for the air force and Navy will be equipped with the same technology, but the design of the aircraft will be completely different.

Because customers have several different ideas about future aircraft. BBC in need, primarily in the replacement of F-22 fighters solely for air combat and only partly for strikes on ground targets. Talking about this their working titles NGAD (Next Generation Air Dominance — “the Next generation for the conquest of the air”) and PCA (Penetrating Counter-Air — “increasing the ability to penetrate the airspace of a potential adversary”). In turn, the Navy, according to the specifications of the F/A-XX, wants to obtain a universal machine for combat with all types of goals, which will replace the existing F/A-18 “Super hornet”. Consent reigns only in that new types of aircraft will be operated alongside the F-35 aircraft.

But officials of the U.S. air force and U.S. Navy as well as civilian experts carry out intensive discussion about what should constitute the sixth generation fighters. By the way, such debates are conducted and in Russia, where to hear criticism of the program PAK FA, and sometimes even talking about its replacement. Summarizing, we can say that there are two fundamentally different views on combat aircraft of the sixth generation. And these views are closely connected with predictions about how the coming decades will be to develop air battle, and all will look military conflicts in which these cars could take part.

The General concept of the F-35 it is clear that this aircraft is designed for combat with the enemy, the technical level of which lags behind the us, say, one or two generations. However, you cannot expect that this advantage will always be maintained. Apart from the fact that the “invisible” fighters may also have other States, it is necessary to take into account the progress in the development of ground-based air defense systems and electronic warfare systems, in which Russia and China has made truly significant progress.

Therefore, proponents of the first view believe that traditional battle on short distances has outlived its usefulness, and it makes no sense to pay special attention to, for example, the maneuverability of the aircraft. In their view, decisive is the maximum range and combat load, so new fighters should be much higher and may even be compared with the category of bombers, to be able to take on Board more fuel, sensors and missiles. By the way, a relatively small combat load and range quite often become the object of criticism the F-35, which, moreover, is no different and extreme maneuverability, because in sparring, as a rule, loses the F-16.

According to some experts, says a lot about what a specific embodiment of this concept may be the Chinese J-20. Its design dictates that the aircraft is designed, primarily, at high speed, long range and load, not maneuverability. That is, in practice, the aircraft would be used as a fighter-interceptor and fighter-bomber, which at large distances destroyed the important enemy aircraft (primarily air tankers and command aircraft), the base and ships. Overall, this fits well with China’s strategy.

Opponents argue that the thesis of the end of the maneuverable air combat persistently repeats for several decades, but in reality nothing like this happens. Say, the ability to hide from radar, electronic warfare and other technical “tricks” will eventually lead to the fact that all the advanced sensors and weapons can be used to a limited extent and finally, it still comes to the good old “fighting on the bends”, similar to the battles of the First and Second world wars.

In addition, proponents of this approach argue that a small number of cutting-edge aircraft is not enough for a long conflict. Therefore, it is believed that the sixth generation of aircraft needs to be easy, strength, agility, and possibly (because of the risk of rapid destruction of airfields) capacity for shortened or vertical takeoff. One Russian expert wrote that the new aircraft should in a sense resemble the famous MIG-15 of Korean war vintage, to be a kind of “Kalashnikov with wings”, that is, aircraft of this design could be produced in thousands of lots.

By the way, the us air force (her ardently supported Senator McCain) is interested in purchasing several hundred “light attack fighter” for a long conflict, it makes no sense to apply the F-22, F-35, or some future hypersomnia planes. Of course, the topical and the debate about unmanned vehicles that can without any fear to send on a very dangerous operation, and in which case does not need to consider the physical ability of the pilot. It’s not just about the time the endurance, but also about survival in extreme aerial maneuvers.

For several years it was believed that the drones are not suitable for dogfighting, because the remote control is not fast enough to react, and completely Autonomous operation — beyond real. But it is these aspects that recently have undergone major changes since it was carried out several simulations with adaptive control systems for drones. The results showed that the current level of artificial intelligence can win in a combat maneuver even the best pilot-man.

One Colonel experimenter, the U.S. air force in 2013 proposed something called the F-40 Warhawk II and described as a simple but fully or partially Autonomous unmanned aircraft for mass production. Of course, the American air force and Navy are planning new combat drones, however, is a rather cautious position with respect to the full autonomy in combat, that is a possibility in which the device decides whether to kill the enemy. There are fundamental ethical issues that today few people want to do.

The problem is that, apparently, we still can not avoid the topic. Critics constantly warn against “killer robots” and the threat that one day they will turn against their creators. Supporters also cite pragmatic arguments say that it is only a matter of time when this technology is developed, for example, China, which is about ethics, most likely, will not think. This dilemma is incredibly complex, because, in fact, puts before us the question of what we fear more foreign fighters, or their own.