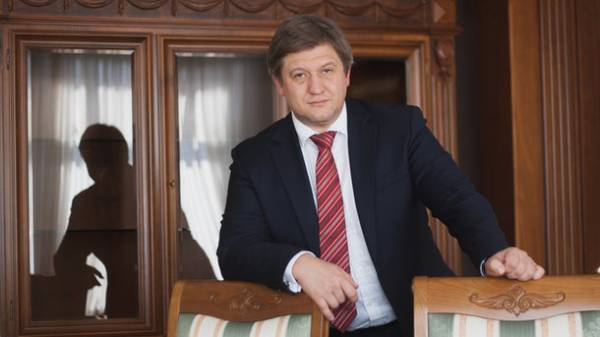 Ukraine returned to economic growth, however, this was a daunting task, but there is still a lot of work. This was stated by the Minister of Finance of Ukraine Alexander danyluk in an interview published by the International monetary Fund (IMF).

“Last year we returned to growth. It was hard work, as everything that could go against us, took place: military aggression, economic aggression, political unrest after the revolution and volatile commodity markets. All this left the country in a very bad condition. But we returned to growth, because over the past three years we have focused on reforms”, – said danyluk.

The Minister noted that the country is now only in the middle of the extended Fund IMF, and therefore the main task of the authorities is to promote reforms forward. According to him, Ukrainian citizens have not yet felt the results of the reforms.

“This is due to the fact that the initially income declined due to the economic downturn and the depreciation of the national currency. However, we had to carry out unpopular reforms. For example, the reform of the energy sector, which included increasing the level of gas to market levels, more than 50% of Ukrainians now receive subsidies. To know that more than half of the population cannot afford to pay for their utilities – it’s quite sad, but it is a reality”, – said danyluk.

According to him, that is why now it is impossible to stop reforms.

“The situation is improving, but still fragile. We can’t stop halfway. We need to continue structural reforms to revive our economy. As a result, increased the standard of living”, – said danyluk.

“To know that more than half of the population cannot afford to pay for their utilities – it’s quite sad, but it is a reality,” said danyluk

Also the head of the Ukrainian Finance Ministry has listed the institutional reforms and economic policies that, in his opinion, Ukraine needs to achieve a higher standard of living.

“The recipe is to win the trust, and the sooner people start to feel results of reforms, the better. It doesn’t have to be economic reforms”, – said danyluk and noted the importance of the reform of health and education, which are not included in the IMF program.

“Health care reform is imperative, because the quality of health care in the country is very low. Theoretically, healthcare is free, but in practice it is extremely expensive because of unofficial payments to hospital workers, so few who can afford it”, – said danyluk.

Danilyuk noted that health care reform will enshrine and high standards of medical care in Ukraine, and decent wages of health workers.

“This restructuring will involve money from the private sector, but we will keep the people who can’t afford health care, could also access it” – said the Minister and added that to accomplish this goal, the practice of state-guaranteed package of insurance.

“Theoretically, medicine is free, but in practice it is extremely expensive,” said danyluk.

“As in health, in daily life, there is a corruption in education. Parents should pay for some things for which they should not pay, while the government spends a lot of money to support their education system. Now we change the funding mechanisms and move from the funding of school and University buildings to the financing of the facilities that these schools and universities can provide,” – said the Minister of Finance.

Also danyluk and the IMF representative Jost Longman discussed the draft reform of the State fiscal service (GFS) in Ukraine, reported the press service of the Ministry of Finance. Danyluk and Longman acknowledged the positive progress in tax cooperation, the introduction of automatic registry recovery value added tax (VAT).

“However, without changes in the structure of the fiscal authorities, further steps will not be effective”, – said the Ukrainian Ministry.

As reported, on September 14, the IMF announced the current requirements to Ukraine. The task of the reform plan will give the country the opportunity to receive the fifth tranche of the extended Fund (EFF).