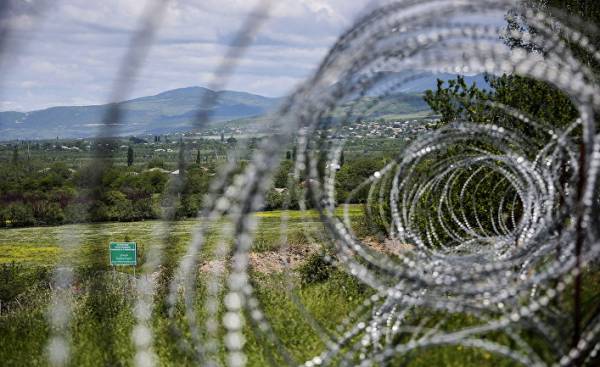 The background glows in Armenia pre-election passions unnoticed one important for the region and especially to Armenia event. Recently Russia and Georgia reached a preliminary agreement on the restoration of communications on the territory of South Ossetia and Abkhazia and the development of mutual trade.

The parties reached agreement during the next meeting of the Deputy Minister of foreign Affairs George Karasin and the special representative of the Prime Minister of Georgia for relations with Russia Zurab Abashidze. We are talking about resuscitation signed in 2011, the agreement on “trade corridors”. In fact, Russia and Georgia went on a step, which for many years have not been able to achieve. Moscow and Tbilisi have agreed, avoiding sharp political issues, to cooperate in the sectors of trade and reconstruction of roads. “We agreed to move forward step by step. We agreed to discuss the issues that can be solved, bypassing the red line”, after negotiations, said Zurab Abashidze. For Moscow and Tbilisi, the status of Abkhazia and South Ossetia and the deployment of the Russian military bases in the area.

Russian – Georgian relations, which a few days ago the President of Georgia Georgi Margvelashvili has described how the relationship in the mode of strategic patience, it seems, has moved from a dead point. Control of the trade corridors between Russia and Georgia, which will be held on the territory of the partially recognized Abkhazia and South Ossetia, will not be carried out by the parties and international mediators. Here to help Tbilisi and Moscow comes eternally neutral Switzerland.

Representatives of the Swiss company SGS, controling the borders, will visit Moscow and Tbilisi in the end of March this year. Parties must decide where will be located the customs offices, then SGS will be signed. “We are ready to take this step. In Prague, it was reached an agreement in principle. Now we will move in this direction,” – said Karasin.

That is, the parties were able to agree on such controversial and seemingly intractable issues as the establishment of customs points and customs control. It is no exaggeration to say that this agreement is vital also for Armenia. “Firstly, Georgia is the only state that land border connects Armenia to the Eurasian economic Union. This agreement allows Armenia to avoid the rather complex questions related to customs oformleniem and start the road to South Ossetia, as the fate of the Upper Lars is largely dependent on natural conditions,” in conversation with the Agency said Russian political analyst, expert on South Caucasus Sergey Markedonov. He added that the implementation of this agreement opens the opportunity to restore section of the Armenia-Russia of the Abkhazian railway.

Needless to say, the restoration of the Abkhaz railway and the opening of these two roads can simply nullify the economic consequences of the policy of isolation of Armenia carried out by Azerbaijan and Turkey. Therefore, it can be expected that Azerbaijan and Turkey will try to prevent the promotion of the process in the first place, putting pressure on Georgia. Moreover, Ankara could use its close ties with the authorities of Abkhazia for the failure of this project.

However, the Russian political scientist is sure that the process will not develop rapidly because there is a disturbing pitfalls. We are talking about the position of Abkhazia and South Ossetia. “Any Georgian-Russian cooperation they perceive with some apprehension and often with fear. For them, the agreement between Georgia and Russia is perceived as a concession at their expense. In this matter the position of Abkhazia and South Ossetia unwavering and hard. So, in my opinion, even if the agreement Abashidze-Karasin will come to life, don’t expect from the process speed,” – said the Russian expert.

The Chairman of the Board of the Institute of development of Georgia Gia Khukhashvili believes that Georgia will be for the execution of this agreement, if we are talking only about strengthening economic cooperation.

“However, the implementation of this agreement there will be difficulties. A critique of opposition of Georgia and law of Georgia “On the occupation”. However, if there is political will, it will be possible to execute it. In the end, because you need to bring the conflict with Russia that canned state? Years go, and the trolley doesn’t go anywhere” – in conversation with the Agency said Khukhashvili.

At the same time, he agreed with Markedonov that, given the visible and invisible obstacles, the process is easy and fast. “Just from the parties will require political will, large diligence to go on the critical actions and take difficult decisions,” he concluded.