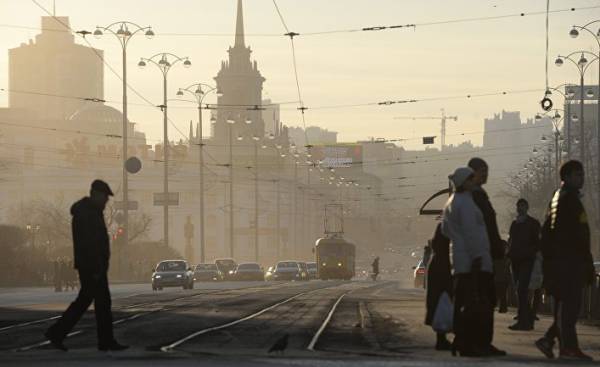 A protracted recession in Russia, officially came to an end in the fourth quarter of 2016, the country’s economy grew by 0.3%, and the growth, apparently, continues. Consumer sentiment showed a positive trend for the first time in 2014. These figures indicate that Russia President Vladimir Putin is slowly returning economic optimism.

In reality, however, is not so smooth. The impression that is on the rise now is rather anti-Putin opposition, not the Kremlin.

Anti-corruption protests that took place last week in Russia and which people inspired a fighter against corruption Alexei Navalny, didn’t seem too impressive in terms of the number of participants. This means that they do not represent an immediate threat to the Kremlin. However, there is no doubt that Putin perceived these weak attempts to revive the protest movement in Russia is extremely serious. Last week he opposed the ideas of the anti-corruption movement:

I think it is wrong when political forces try to use this tool [to combat corruption] for his promotion, and not to improve the situation in the country. It is a tool of the “Arab spring”: we know very well what it led to. This was the reason for the coup in Ukraine and plunged the country into chaos.

Such comparisons seem rather alarmist for a person who observe this caution in relations with his enemies as Putin. This is a real gift for his disparate political opponents who felt that now they had the chance. Due to the protests on March 26, “the political situation in Russia has radically changed,” wrote the former world chess champion Garry Kasparov, who is not a fan of Bulk, but who also sees Putin as the enemy. “No matter what motivated Navalny and his supporters, their actions led to a serious destabilization of the government and create the preconditions for the formation of a revolutionary situation”.

Former oil tycoon Mikhail Khodorkovsky, an opponent of Putin who now lives in Europe, being a persona non grata in Russia, and which is financed by the Russian anti-Putin movement, too, apparently, were encouraged in connection with these protests, and now he calls on his supporters to take to the streets on April 29. Now there are reports about the growing protest movement among farmers in the South of Russia. Many residents of St. Petersburg have expressed dissatisfaction in connection with plans to transfer to the famous St. Isaac’s Cathedral which is now a Museum, the Russian Orthodox Church.

Navalny, who was detained for 15 days for organizing protests will probably try to take advantage of their relative success, once released from prison.

Many observers predicted the growth of the protest movement in 2015, when a sharp drop in oil prices and the introduction of the West sanctions against Russia in connection with the annexation of Crimea has dealt a double blow to the economy of the country. However, the Russians managed to survive the most difficult period, listening to Putin’s promises to make improvements within two years and the news about the growth of Russian power in the international arena.

Economic promises were fulfilled — at least at first glance: the downturn stopped. In the first quarter of this year, according to forecasts by the Russian Central Bank, economic growth will be 0,4-0,7%. Bloomberg experts believe that in 2017 growth will be 1.2% and the Central Bank of Russia claims that it can achieve 1.5% if the oil price doesn’t drop again. The level of domestic consumption is declining, largely due to recession in 2015 and 2016, but not so rapidly as before. So why did Russians rebel?

In March, “Levada-center”, one of the few Russian organizations that have managed to maintain their independence, conducted a survey which may give some hints. Immediately after the annexation of Crimea the idea that the Russian government needs support in a difficult situation, adhere to more Russians than usual. To date, this effect has come to naught, and ordinary citizens again, believe that the government is doing for them is not enough.

Geopolitical victory of Russia in 2016 — for example, in Syria, was not associated with any tangible improvements in the lives of ordinary Russians, and this has mostly been the achievement, not backed up by success this year. The economy remains stagnant and the corruption situation in the country remained unchanged. People begin to feel that Putin’s policies there is no clear objective.

To overcome this trend, Putin and his entourage have to paint an attractive picture of the future. The protesters — and apparently a growing number of Russians consider them to be opportunists who seek only to personal enrichment. That is why the Bulk of the investigation of the anti-corruption cause such a response. The Kremlin, meanwhile, is making a rather weak attempt to explain where it leads to. Now there is growing evidence that in front of a dead end.

In its strategic document published in autumn last year, the Russian state Agency responsible for use of mineral resources, carefully noted that the volume of oil production — the profit from which is the lion’s share of the national budget — will begin to fall after 2020, if the oil industry does not appeal to hard-to-reach fields, which will require investments, development of new technologies and higher export prices. Experts, not associated with the government, described the situation in a more somber tones: Mikhail Krutikhin from RusEnergy consulting company, believes that after 2022, the volume of oil production will decline at a rate of 10% per year, and by 2035, Russia will not be able to produce more oil than necessary for its needs. Andrei Movchan, who heads the economic program at the Moscow Carnegie center, agreed with the assessment Krutikhin, noting that in 10 years Russia could be in danger of disintegration due to the fall in revenues from the sale of energy.

These gloomy forecasts actively share with each other social media users, and, although the government denies the information that the proceeds from the sale of energy will soon sharply decline, Russians, especially young people, are increasingly asking themselves what lies ahead. According to new data, unlike other age groups, young Russians aged 18 to 24 years do not show special interest in working in the public sector — under Putin, all the other prospects seem to be quite vague.

Next year Putin will be re-elected for a new term, and, although the Kremlin, as usual, will use all available resources to vote to tip the scales in his favor, he still should think about how to convince some voters hopeful picture of the future. Otherwise, he will once again play on the sense of impending danger. Such incidents as the terrorist attack in the St. Petersburg metro, which occurred on Monday, April 3, undoubtedly, will contribute to this, but rely on them to win the election — it’s too cynical, even for Putin.