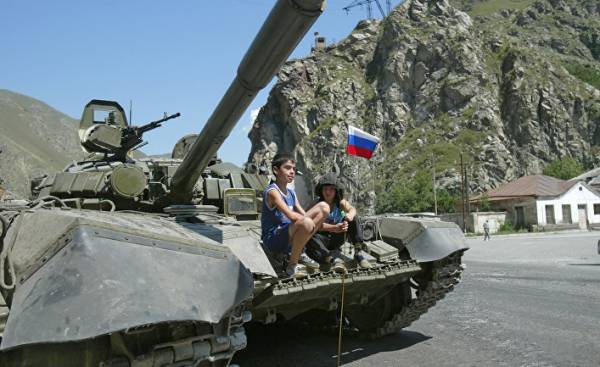 On the night of August 8, the vehicle convoy, which was the car of the crew (Russian) Vesti TV channel, came under fire. Then special correspondent Alexander Sladkov was shot in the leg, the operator Leonid Losev — two bullets in the arm, and the video engineer Igor Uklein was wounded.

Sputnik: Could you tell us your version of events?

Alexander Sladkov: In Tskhinvali then there were two major centers of resistance: the lower town and upper town. In the lower town was the headquarters of the leadership, there were journalists. Around were fighting, but it was a relative island of safety in the city, which was stormed by the Georgian Armed forces.

Information about what is happening in Tskhinvali, was not. Had to go to the rescue of those people who fought back, first of all, the Russian military. In addition, it was necessary to prepare the city for the operation to enforce peace by Armed forces of Russia. General Khrulev decided no matter what to enter the city: the battalion tactical group of 693rd regiment he was sent to the outskirts of Tskhinvali, the battalion tactical group of the 135th regiment went directly to the city.

The city was saved by the Russian military, but heavy share fell to ordinary citizens, who with arms in hand were shot, fought. The real mountaineers, who remained to defend the city, in fact, decided the question. Of course, then came the Russian troops, and quickly established order. The war is called five-day. During the five days of events unwound and came to a logical conclusion.

– Under what circumstances you came under fire?

— During firing, the bullet passed through the body of the officer, Denis Vetchinova, which was closed. Shot in the foot, where it has remained. There is nothing heroic or scary, and the scary fact that Dennis died. The scary thing is that of the 211 employees of the battalion tactical group of 70 people were injured and 22 were killed. There was a lot of real heroes. Denis Vetchinov has closed me itself, but “Star” he received, of course, it is not. He blew the tank, actively behaved during the battle, when we were ambushed. A real fighter, a real officer.

The captain seized on the first came to the city, even at night. They have not lost a single tank, not a single person brought peacekeeping battalion from the upper town. In fact, our entire battalion was withdrawn. There remained only the officers, who refused to throw the bodies of dead soldiers. Seized on — a real hero.

I was with my crew. On the way to Tskhinvali, we met two journalists of “Komsomolskaya Pravda”, Viktor Sokirko and Sasha Kots. Honestly, at that moment I felt sorry for them because they took a big risk, could be lost. Invited journalists to join us and introduced them to the commander of the 58th army Hruleva. After the injury we were in the Vladikavkaz military hospital, then we were evacuated to Moscow. I refused hospitalization. Sasha Kots was wounded, Victor Sakirko — no. Victor Sakirko experienced former officer, served in Afghanistan.

– What are the moments remembered most clearly?

— If, during the tension of people shooting, it is a disaster, but when you start to run headlong into civil — that is a nightmare. Came the Russian columns, and stood next to women who baptized them, gave them bread.

It is important that the Ossetians have not forgotten what they did to the Russians, as now forget the Europeans who pulled out of the fascist swamp. Then, over time, these characters disappear from the horizon, there are new heroes. The most important thing that the real heroes remained in the memory. In this situation, it is the Ossetians, who fought in the town with weapons in their hands, and those Russian soldiers who came to help. When I say “Russian”, I mean all the nationalities of Russia.

– What was the purpose of the Georgian authorities, when they came to the provocation?

— The Georgian authorities carried out the task formulated by American instructors. This is my point of view. To subdue the area that previously belonged to the Soviet Union, it was necessary to follow the principle of “divide and conquer”. It was necessary to smear in the blood of Georgians, Russians and Ossetians in order for these wounds oozed, in order to be able to manage the people who would hate each other.

For you Georgians are enemies?

— The story must be carefully disassembled to understand why the people of Georgia, which the Russians defended from the Turks and Persians in the early nineteenth century and the late seventh century, was able to raise a hand against the Russian soldier. They, too, need to sit down and understand. Why the Georgian helicopters suddenly appeared over the beach in Sukhumi and were the first to shoot at people? Why? You need to sit down and reflect.

Was made one big mistake — you don’t shoot at Russian soldier. Still Russia no one will win — there was no such precedent. Why would fate be tested? Russians know how to defend and know how to die. It’s all the Gladiator fights, where the strongest wins, but Russia always wins: that in the Donbass, in Syria, in Georgia, in the great Patriotic war. Here it is in genetics.

Genetics present in that ethnic harness, which made the Nations of Russia around the Russian world. But this does not mean that Russian should go everywhere and give the team. No. This nation bears the cross of responsibility for the lives of the other Nations in Russia.

We need to restore Georgia diplomatic relations. However, Georgia is not yet ready for full-scale restoration of relations with Russia. But one day they’ll be in trouble, and need our protection. Maybe they’ll remember then, genetically.