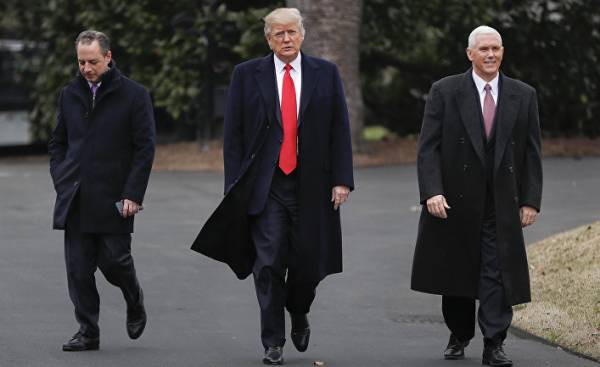 Washington. — Record phone conversations and intercept materials indicate that members of the electoral headquarters of Donald trump and his aides have repeatedly been in contact with senior representatives of the Russian intelligence in an election year, as reported by four current and former U.S. officials authorities.

American law enforcement and intelligence agencies intercepted these communications approximately the time when evidence surfaced that pointed to Russia’s attempts to introduce confusion into the presidential elections by hacker attacks on the national Committee of the Democratic party. This was told by three of the four sources.

Those officials who gave interviews in recent weeks, said that while they see no evidence of such cooperation.

However, the intercepted materials have alarmed the American secret services and law enforcement agencies because such contacts were numerous, and they occurred at a time when trump praised Russian President Vladimir Putin. Once last summer, trump on one of the campaign events expressed the hope that the Russian intelligence service had stolen the email correspondence of Hillary Clinton and now publish it.

Sources said that such contacts with Russians supported not only the employees of the campaign headquarters of trump, but his other assistants. From the Russian side in the talks was also attended by the people from the government, not related to intelligence. All current and former representatives of the authorities asked not to name their names because of the ongoing investigation are classified.

According to them, one of the participants in the telephone conversations were by Paul Manafort, who last year for several months headed the election campaign of trump. Earlier this person worked as a political consultant in Ukraine. The sources refused to disclose the names of other aides of trump, had had contacts with the Russians.

Logs calls and the materials of interception of telephone conversations became a rich source of information that thoroughly analyzes the FBI, investigating the connection between the environment trump and the Russian authorities, as well as hacker attacks on the DNC … This was announced by officials from the Federal law enforcement agencies. According to them during the investigation, the FBI obtained Bank records and data about trips, and also conducted a series of interviews.

Manafort, which is not charged no charges, during a telephone interview on Tuesday dismissed the statements made by the aforementioned sources. “It’s absurd, he said. — I have no idea what was going on. I will never knowingly talked to members of Russian intelligence and had no relation to the Russian government, by Putin’s administration and everything else that is now under investigation”.

He added: “Because these people don’t wear badges that say “I am a Russian spy””.

Some of the people around trump as Manafort, doing business in Russia. In countries such as Russia and Ukraine, where the security services are deeply rooted in the society, there is nothing unusual in the fact that American businessmen are in contact with foreign intelligence officers, sometimes unwittingly. Law enforcement officials are not announced the extent to which these contacts were related to business.

Four sources from the authorities revealed few details. They are not told what was discussed during phone conversations, and who participated in them from the Russian forces, and how the trump were advisers and had had contacts with the Russians. It is unclear, and whether these conversations something to Trump.

Published in January the report of the U.S. intelligence concluded that the Russian government interfered in the elections to help Trump. But nothing is said about how participated in this activity, someone from the headquarters of the trump.

Intercepted calls are different from recordings of telephone conversations that took place last year between former Advisor to trump on national security Michael Flynn and the Russian Ambassador to the United States Sergei Kislyak. In the course of these conversations, which Flynn on Monday evening resigned, discussed anti-Russian sanctions imposed in December by the Obama administration.

American intelligence and law enforcement agencies regularly conduct surveillance with the use of electronic tools for correspondence and conversations of foreign officials.

“I have no reason to say that during this time something has changed,” said Spicer, responding to a question.

Two days after the November elections, Deputy foreign Minister of Russia Sergei Ryabkov said that during the campaign “were the contacts” between the Russian officials and people from trump.

“Of course, we know most people from his entourage,” — said Ryabkov, the Russian news Agency “Interfax”.

The national security Agency that monitors communications between foreign intelligence agencies first intercepted the conversations of trump’s assistants with the Russians in the process of daily surveillance. After that, the FBI asked the NSA to gather as much information as possible about the caller of the Russian agents and analyze previously captured materials not screened.

The FBI thoroughly checked at least three close to the Trump people, although it is unclear to intercept their calls. A businessman and former adviser to trump on foreign policy issues of the campaign headquarters of Carter Paige (Carter Page), a longtime employee of the Republican party Roger stone (Roger Stone) and Flynn.

All these people denied that they had improper contacts with the Russian representatives.

As part of the investigation, the FBI also tries to assess the accuracy of the information contained in the dossiers referred to it last year by a former employee of British intelligence. It contains a lot of allegations about large-scale collusion between the tramp, his assistants and the Russian authorities. There are also unsubstantiated allegations that the Russian made incriminating videotapes to blackmail trump.

The FBI several months, we analyzed the content of this dossier, however, has not confirmed the scandalous allegations.

Senior executives from the FBI believe that this is a dossier that formed the former British intelligence officer Christopher Steele (Christopher Steele) has an outstanding record. In addition, last year he informed the investigators about how he received this information. One of the representatives of the American law enforcement authorities said FBI agents came into contact with some sources Steele.

The investigation of Manafort began last spring in the context of a criminal investigation into his work on the Pro-Russian political party in Ukraine, and the former President of the country Victor Yanukovych. Investigators are trying to understand why he maintained such a close relationship with members of the Russian and Ukrainian security services.

The FBI didn’t have enough evidence to get a warrant to intercept telephone conversations and e-mails of Manafort, but it asked the NSA to carefully examine the calls and correspondence of the Ukrainian officials, whom Manafort met.

The FBI’s investigation is parallel to a separate investigation on the facts of Russian intervention in elections that are gaining momentum on Capitol hill. In the course of these investigations conducted by the Committee on intelligence of the house of representatives and the Senate, we study not only the Russian hackers ‘ attacks, but also those relationships that team trump was supported by the Russian during the campaign.

On Tuesday, a senior us congressmen said that the investigation should focus on Flynn, and that he should be called to Congress to testify. Democratic Senator from Virginia mark Warner (Mark Warner), working in the intelligence Committee, said: “the news about Flynn underscore how much more questions remains unanswered, though after the election it’s been three months. Yet it is not known who, what and when knew.”

According to Warner, Flynn’s resignation will not stop the Committee, and he will continue to “investigate the activities of General Flynn and all the other participants of the election campaigns before the elections to maintain inadequate contact with Russian representatives.”