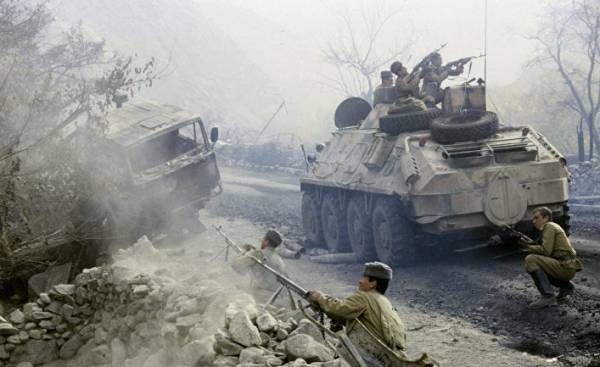 The attempts of the Afghan government to come to an agreement with the Western countries led to the fact that in the last days of 1979, the Soviet Union decided to provide Afghanistan a “brotherly help”. The result of the operation “Storm-333” the power in the country has returned to the hawks and their opponents have been eliminated, however, the conflict is not ended, but only escalated.

“The Soviet invasion of Afghanistan” (a formulation coined in Moscow to not use the word “war”) began as a local operation, but a few months later turned fierce fighting. The Pro-Soviet government in Kabul was not able to control their province, so to pacify them went by the Soviets. Then Afghanistan came the first poles. Unfortunately, this was not the first conflict in Central Asia, in which he participated (often not of their own accord) our countrymen. This war could fight a few thousand troops with Polish roots. 057 among 9 killed in Afghanistan soldiers of the red army was at least 22 “of a Soviet citizen of Polish nationality”. At least, since not everything was recorded in Soviet documents as the poles…

Polish sympathies were on the side of the Afghan resistance. They showed in different ways: there were articles in the underground press, “Solidarity” did themed stamps in the streets leaflets and posters with inscriptions: “Red entry”, “Afghanistan — Poland. One thing, one enemy.” A common enemy has become a target for ridicule. In the newspaper Zycie Warszawy, there was an announcement: “Sell the skins of the Afghans.” The telephone number posted is not the seller, and the Soviet Embassy. In 1982, on Mont Blanc hoisted two flags. On one was written: “the Independent self-governing trade Union “Solidarity”” and the second “Solidarity with the struggle of the Afghan people”.

The author of this unusual event was the Polish climber Jacek Winkler (Jacek Winkler). A few years later he became one of the first Polish of the Mujahideen in Afghanistan. Apart from him, in the war-torn country has got four more poles. Among them was one woman Zezulka Stasia (Stasia Zedziełko), which came from the United States. She worked in a field hospital of the Mujahideen of Ahmad Shah Massoud and helped the wounded guerrillas. Is it possible to take it to the Mujahideen, since she did not participate in the fighting? Difficult question, because actually fought against the USSR in Afghanistan, only one pole.

When Zondek Lech (Lech Zondek) was just a young boy, he allowed himself to be drawn into cooperation with the security Service, but managed to break up with her and in 1981 sought refuge in Vienna. Then he went to Australia, where for three years he prepared to fight the USSR: worked, studied the shooting, was a survivalist, established contacts among the Afghan immigrants. In 1984, received an Australian passport, he travelled to the Pakistani city of Peshawar, located a few dozen kilometers from the border and served as the most important item of assistance to Mujahideen. Around the city there were refugee camps, training facilities and warehouses. The city became the base for Thandeka Leh. He several times crossed the border and took part in attacks on Soviet forces. In battle, he never parted with his hat, on which was depicted the pre-war coat of arms with an eagle in the crown. Sondek was several times wounded, in the end, the Mujahideen had removed him from participating in battle: he was much more valuable as an instructor and correspondent for foreign media. He took pictures and sent them abroad to his reports it was said on the radio “Voice of America” and “Free Europe”. “In one nuratinskiy the village, he decided to teach locals hand-to-hand combat. When he judo repulsed the attack of the Afghans, he felt himself insulted and injured of Sondika with a knife in hand. It ended in disaster. During passage through the mountains Sondek couldn’t resist on the patient’s hand and fell from the cliff. He died on the spot. Comrades found his body July 5, 1985, on his grave was placed a cross with the inscription: “Lech Zondek, Polish soldiers. 1952 — 1985″. Later, local residents dismantled the cross on wood” — describes his death Radoslaw Sikorski (Radosław Sikorski).

At the time of death of Sondika the war in Afghanistan was entering its most bloody phase. The number of Soviet soldiers had already exceeded 100 thousand, and together with the units subordinate to the KGB, and other “advisers” or “instructors”, this figure reached 150 thousand. The order of the Communist government in Kabul, the forces were approximately the same size. The Mujahideen gradually were pushed into the mountains, suffering civilian population. In the end, the war claimed the lives of two million Afghans, mostly civilians.

In this the saddest and bloodiest phase of the war took part Skripavac Andrzej (Andrzej Skrzypkowiak). His mother was the widow of the murdered in Katyn of officer, and his father was a soldier of General Anders (Anders, Władysław), who was in Siberian exile. Skripavac called “Andy”, because he was born and raised in exile in England. In Afghanistan, he came as a reporter for British channel BBC, his material has also extended the American TV station.

During his trips to war-torn areas it was not limited to observations of military life, but also took part in the fighting. The training had three years service in the British army he spent in the ranks of the marine corps. “Andy” fought under the command of Ahmad Shah Massoud. Massoud operated in the area of the Panjshir valley just North of Kabul, and was the most skilled commander of the Mujahideen. He attacked Soviet supply convoys, private roadblocks and even fired at Bagram air base. The Soviet army a dozen times trying to squeeze it out of the Panjshir valley, however, did not succeed. Skripavac did not wait for the end of the war: he was killed in Afghanistan. He wasn’t killed by the Soviet military and the Mujahideen warring with Masood.

At this time in Afghanistan he arrived the next poles. Among them was the above-mentioned Jacek Winkler. In the 1960-ies he has been active in the opposition and was part of a group that was transported across the Tatras published abroad the Polish press. Pnrm. the court sentenced the wife Winkler to prison, and he himself denied entry to Poland. In the war he was complicated by: the passport of the refugee is not allowed to move freely around the world, so Winkler made in France fake documents and went with them to Pakistan and then to Afghanistan. He didn’t go to war with the Soviet forces, and to support those who fought with them. The Afghans belonged to Winkler with sympathy and respect. They called him “Adam Khan”, that is, Adam the Lord, and gave it rare for foreigners the privilege of allowing me to carry a gun in the presence of Ahmad Shah Massoud.

Side by side with Massoud Winkler fought six months. Returning to France, he continued to defend the cause of the Afghans. He published the “Afghan newsletter”, which was actively discussed in the Polish underground press, and collected funds for assistance to the warring Afghans among the Polish Diaspora in America. When the collected money Winkler returned to Afghanistan, he could boast that he had discussed with the Cabinet the need to supply the Mujahideen with Stinger missiles.

With complexes Stinger is also tied up with the fate of the most famous pole in Afghanistan — Radoslaw Sikorski. Martial law found him, a recent student in London. He asked for political asylum and taking advantage proclaimed him in connection with the status of a scholarship, went to Oxford. In Afghanistan, Sikorski went in 1986 as a journalist (he worked in particular with the editions of The Sunday Telegraph, The Spectator and The Observer). In the country he was illegally crossing the border together with the Mujahideen. To avoid any risk when meeting with the Soviet forces (who could have denounced him to the authorities of the NDP, and those, for example, tried for treason), he went with a British passport in the name of Radek Sikorski (in the years of his political career is already in free Poland, it was repeatedly reproached that British citizenship). 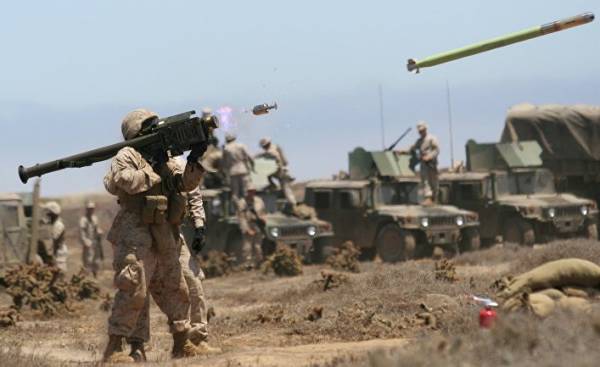 Sikorsky was one of the first (or even first) correspondent, captured on film that the Mujahideen using American anti-missile systems Stinger. The appearance of this weapon in Afghanistan turned the tide of the war. The Soviet army at the peak of their success was controlled by 20% of the Afghan territory, but would attack the Mujahideen in any place and at any time. The advantage it provided assault and transport helicopters. Light Stinger MANPADS, which could be controlled by a single person, was for helicopters greater danger and, in essence, put an end to Soviet dominance in the air.

However, they could not hit the aircraft, which was moving at a high altitude bombing primarily civilian targets: the rebellious towns and villages. In one of these places Sikorski took a photo of the killed during the bombing of Afghan families are covered and mummified by the ash. The publication of this shocking picture (which received first place in the editorial category of the World Press Photo contest) helped the Afghan cause more than fighting with weapons in their hands. Of course, weapons at Sikorsky in long transitions in war-torn areas it is indispensable. Their impressions Sikorski described in the book “Dust of the saints.” It is also worth Recalling that the future Minister of foreign Affairs came to Herat province, which lies to the West of Afghanistan, far from safe of the border with Pakistan.

Soviet military advantage is gradually eroding, and the resistance increased their strength. In 1988, according to estimates, the Soviet Union, the enemy had 4 530 guerrilla groups a total population of 173 thousand people, the arms of which consisted in addition to the American Stinger MANPADS 86 mountain guns, 770 mountain anti-aircraft and about 700 anti-aircraft missile complexes “Strela-2”.

“The Soviet invasion of Afghanistan” was becoming more and more expensive operation: not so much economic (USSR used local deposits of gas, which allowed to cover part of military spending), but socially. Through Afghanistan was approximately 620 thousand Soviet citizens. The war changed those who came home: they had not only physical but also psychological wounds, a steel known for its poppy country addicts. The war in Afghanistan became the object of attention of Western countries and the theme for the popular movies about Rambo and James bond. The Soviet Union was unraveling, so he had to end the conflict: in February 1989 the Soviet army left Afghanistan.

In 1992 the Mujahideen captured Kabul, he commanded them, Ahmad Shah Massoud. The war-ravaged country, however, became the new arena for the fights, and the authorities there seized by the Taliban. In September 2001, they killed Massoud, who was once again the leader of the opposition. Two days after his death, the terrorists attacked the world Trade Center and went to Afghanistan the us military. With them there arrived the Polish military contingent of the poles again become allies of the Mujahideen of Ahmad Shah Massoud. Over a dozen years in Afghanistan, was visited by about 30 thousand Polish soldiers and more than 40 died trying to bring peace to this ravaged by years of war the country.