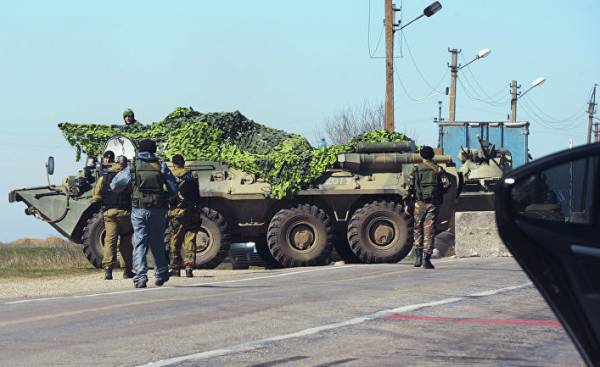 Admingranitse in the Crimea sparked the conflict between the Ukrainian military and those who call themselves “the emerging battalion of a name of Noman Çelebicihan”. According to the version of the Armed forces of Ukraine, their soldiers had to detain and disarm members of “illegal armed formation”, which came to the place of execution of their combat missions. Second side of the conflict claims that the collision occurred due to the fact that APU decided to conduct night exercises near their location. Crimea.Realities find out the details of the incident.

First about the conflict in the village of Chongar said Radio Kuresh and the publication of “Ukrainsky Puding”. These media in the night from 12 to 13 February published information about the fact that the soldiers of the Ukrainian Armed forces captured the base of public formation “Asker”.

In response to these reports the press service of the operational command “South” made a rebuttal under the title “Fake — worse than a shot in the back”, which was published on their official page in Facebook.

In a press release said that the Ukrainian military attacked participants of the “Asker”. According to the report, conflict broke out between soldiers of the APU, performing a combat mission, and members of “illegal armed formation”. The last version of the command South, arrived to the Ukrainian military when they were arranged battle positions.

“Given the specificity of the units and the conditions of the situation, the party has been detained, disarmed, and fulfilled all the requirements of the Charter and other legislative acts concerning actions in similar situations. Now continue, in accordance with the regulatory framework, certain measures and accounting of weapons that were seized,” reads the press release of the command “South”.

Another version of the incident the businessman Lenur Islyamov, the leader of the “civil blockade of the Crimea” and the head of the formation of the “Asker”. Differently it refers to the participants the incident of the conflict. According to him, the collision occurred between the APU on the one hand, and “the emerging Crimean Tatar battalion of a name of Noman Çelebicihan” on the other.

“The armed forces of Ukraine in the face of one of the battalions, which here is on the “border”, decided to do night exercises near the border of our volunteer battalion, which is now being formed. Of course, there was a small skirmish, in which no one was hurt… a Little damage to our structures, trailers or something else, but it’s all fixable,” said Lenur islyamov in comments to the Crimea.Realities.

On the question of which party instigated the conflict, he found it difficult to answer. At the same time, the employees of the TV channel ATR, owned by Islyamova, extended version that first attacked the soldiers of the APU. Moreover, journalists ATR stated that the major who commanded the army, was drunk and allegedly colluded with a local businessman, whose business is hampered by “Asker”. Confirmation of this information from other sources.

According Islyamova, at the moment at three checkpoints on the administrative border with the Crimea are two separate structures: civil formation of the “Asker” and “forming a battalion of them. Of Noman Çelebicihan”. Moreover, according to him, these two groups serve different purposes, and they are different people. Islyamov says, “Asker” carries out civil control over the work of border guards and customs officers, and the members of the “emerging of the battalion” engaged in military training. The Lenur islyamov did not give a direct answer to the question of whether or not there was “Asker” or a battalion of military weapons, and withdrew his militiamen.

“If you are referring to all of these training grenades and all that stuff that we have, then, probably, Yes. We have a law of Ukraine, if you know in which captured weapons is transmitted to the battalions. So, if we have captured weapons, it likewise will be transferred to the battalion, which will be formed after receipt of a military unit,” said Lenur islyamov in comments to the Crimea.Realities.

The operational command “South” continues to insist that people Lenura Islyamova, the National police seized an Arsenal of weapons.

“Seized firearms, explosive objects. Representatives of the National police seized and removed from there it is a concealed weapon of this illegal armed formation. Representatives of the military Prosecutor and the military police now carry out the necessary action to clarify all these circumstances,” — said the press officer of the operational command of the armed forces “South” Igor Biryukov in comments to the Crimea.Realities.

The national police confirmed that the weapons near the village of Chongar is really seized. According to information a press-services of the Kherson Central Board of national police opened criminal proceedings under part 1 St. 263 Criminal code of Ukraine — Illegal handling of weapons, ammunition or explosives.

“To study subjects which by their appearance resemble firearms and ammunition assigned to ballistic and explosion and technical expert examination. To conduct the necessary investigations to establish the origin of the seized items”, — is spoken in the message of national police.

In a press-service of military Prosecutor’s office of the southern district denied the information that their Department conducts a review of the incident on the “border” and refused to comment on the subject. In the Kherson security service head office, the correspondent of the Crimea.The realities reported that their employees were at the scene, but only watched.

The head of the Mejlis of the Crimean Tatar people Refat Chubarov is one of the main supporters of the creation of dobrobat them. Of Noman Çelebicihan — described the incident as “unwarranted and forceful military occupation of the territory, a public organization “Asker”. Day 13 of February, he met with the Minister of defence of Ukraine Stepan Poltorak, with whom they discussed the incident.

Also, it is reported that the APU is ready to consider statements of members of the “Asker” who will Express desire to serve in a certain “the Crimean division of the marine brigade APU.”

The Minister did not specify whether we are talking about the legalization of “battalion of Noman Çelebicihan” or the creation of a new structure.

On the evening of February 13, his version of the incident presented by the organization “Media initiative for human rights”. Its representatives argue that in the night from Sunday to Monday the following happened.

“Observation posts “Asker” and 34 battalions are located at a distance of about 200 meters from each other (from different ends of the market). The night before the soldiers noticed that “ostrovtsy” reported for duty with military weapons. After the report of the commander, received orders to disarm them. However, the volunteers resisted” — say human rights activists.

According to them, once between the parties the conflict started, to help the 34 battalion of the armed forces arrived the armored personnel carrier, and later the battalion commander.

“During a search in the camp “Asker” was discovered an Arsenal of weapons. The military called the police. The weapons were confiscated and piled in the van for delivery to the station. However, the “ostrovtsy” blocked BRDM and a van. The conflict lasted until the morning”, — stated in the message “Media initiatives”.

According to them, after arriving at the place of Lenura Islyamova, representatives of counterintelligence, military service law enforcement and prosecutors, was found a compromise. He allegedly was the commander of 34 battalion apologizes for use of force against the volunteers, and the “Asker” unlocks BRDM and surrendering all illegal weapons to the police.

“Media initiative” States that seized by the police the guns listed as lost 24 separate assault battalion “Aydar”. The disappearance of the weapons of the battalion, which has 3000 units, informed the military Prosecutor’s office has opened several criminal proceedings. Confirm that the machines “Asker” are among this Arsenal, from other sources. Natspolitsiya States that continues to set the origin of the seized weapons.”

But still still still… Let’s remember that the roots and branches of Russian imperialism are present not only in contemporary politics and historical past. There are some in the area that lies closest to the human soul in literature, in art. The information war against the last Empire in the world — for a long time, and this culture does not stand apart from it. Think about the specifics of Russian literature is at least to remember when designing training programs for secondary school to imperialist poison “Russian world” not intoxicated young souls.