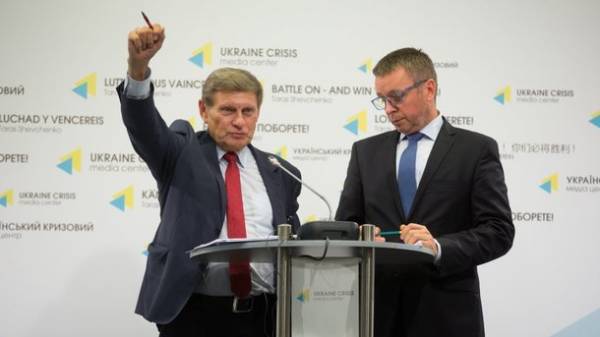 The national Council reforms, in which former Polish Deputy Prime Minister Leszek Balcerowicz and the Slovak ex-Minister Ivan Miklos lead a group of strategic advisors, recently reported on the work done over the last year. “Today” figured out in the document of a foreign assault and identified the key changes.

A REASON FOR PRIDE. The most productive are called anti-corruption initiatives and issues of cleansing power. According to estimates of the national Council, lyustrirovat managed almost a thousand people, and the test start in almost all bodies of power and local self-government. Separately marked the start of a number of anti-corruption bodies: NABOO, Special anti-corruption Prosecutor’s office and the NACP. For example, NABOO is now investigating criminal proceedings in the amount of UAH 82.5 billion, and NACP has conducted more than 250 meetings. To them, the Agency approved the form of financial statements for political parties and audit plan the last in 2017. Large-scale was and reform in health care. Here credit the reformers put the abolition of the staffing ratios in hospitals.

We will remind, earlier the number of doctors in hospitals was determined by the number of hospital beds, cleaners — a total area of institutions, and the size of the staff electricians — the number of sockets. Now the hospital management is hiring as many people as it sees fit. The crown of his work in this area, reformers believe the increase in midbudget from 57 to 62 billion UAH.

Finally serious work has been done in the education system. In the national Council to recall the separation of learning in schools for a few cycles — an adaptation of the game and basic. In addition, among the initiatives highlight the concept of development of the middle school, painted until 2029. It involves changing school curricula, the introduction of specialized high schools and the changing school funding on the principle “money follow a child”.

THE THINGS WHICH ARE TO COME. Together with the progress report, the national Council has provided a list of what needs to be done in the near future. For success in the fight against corruption still needs to get detectives to NAB and complete set of spectracolor. The project also plans to create a Commission that will validate spending the NAB and its political independence. However, in health it is urgent to establish a National health service. It will allocate budget money to the hospital for each patient. In addition, in the next 2-3 months will need to approve the guaranteed package of services, which not so long ago submitted to the Ministry of health. As for education, here, in the opinion of the reformers, the matter only for Parliament is today expected from consideration of four bills on education (secondary, higher and vocational).

LET’S GO, BUT SLOWLY. Political analyst Vadim Karasev believes that today’s pace of reform has slowed. “For successful reforms need broad support, which primarily should be at the level of the Verkhovna Rada to support them legislatively. Since BP does not have a broad coalition, that the necessary laws do not support. Here’s what were able to do up to this point, yet it also limited the reforms he says. — Yes, and coverage of the work of the national Council snik — has no pathos, live broadcasts. Because there is no success to be publicized and cover”. This Karasev notes that anti-corruption reform undoubtedly a success and now it is very difficult to curtail this direction of struggle. In turn, his colleague Volodymyr Fesenko reminds that the Council is more Advisory body and to direct the reform is not responding. “In my opinion, with its functions, this body handles. But when we are talking about reforms, it is important to understand that the number is not conducive to quality. We need a large number of advisers, and a few real reformers who will drive the process” — sums up the expert.

GLAD IMPEDES REFORM. Despite a fairly productive work, the Council recognized that there are solutions to achieve that have failed. For example, did not create the state Bureau of investigation. This authority is to investigate criminal cases, defendants are law enforcement officers, judges and Ministers. Besides, the Parliament never voted for a law that would allow the NEB to conduct a wiretap. Today, the Bureau shall coordinate with the security Service. In health care reformers failed to provide full autonomy to the medical institutions. In addition, it has not been completed, the concept of reforming of public procurement of medicines. It is expected that this step will allow you to create a number of organizations that will save time, purchasing medicines for rare diseases, maintaining contact with international organizations. However, in most of the reforms the national Council in the “what has not been achieved,” notes not accepted in the Verkhovna Rada bills. This situation observed in the education reforms of the civil service and financial sector.