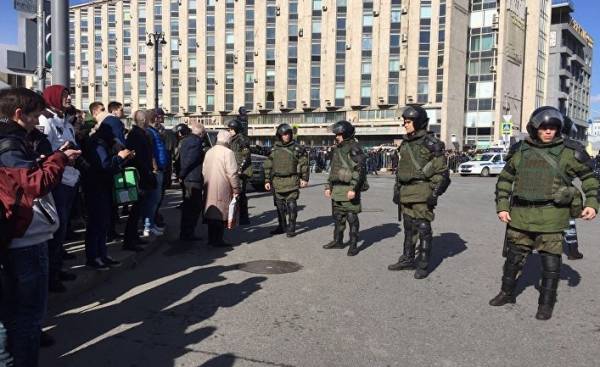 Alexei Navalny and more than 200 of his supporters were detained at an unsanctioned rally against corruption in Moscow, however, several thousand protesters gathered on Pushkin square, and the police did not disturb them.

Navalny was detained shortly after the exit from the metro station Mayakovskaya.

For some time after the arrest, a crowd of supporters surrounded the police car, demanding to release Navalny.

“Guys, I’m fine. I don’t need to recapture. Walk along Tverskaya. Our topic today — the fight against corruption,” Navalny wrote in his Twitter after the arrest.

A paddy wagon with the Bulk still went, despite the opposition of the crowd, the correspondent of Russian service Bi-bi-si Vsevolod Boyko.

Alexei Navalny made the Protocol under article 20.2 of the administrative code for violation of the order of organization and holding of the meeting, reports TASS.

After the detention of Navalny all employees created the Fund of struggle against corruption (FBK) were arrested, even those who are not out on the street.

“This is the best assessment of their work. FBK does not give a quiet life to thieves,” wrote Alexei Navalny in his “Twitter”.

26 Mar throughout Russia rallies demanding the fight against corruption. They were preceded by the publication of the investigation of the Fund of struggle against corruption, created by Alexey Navalny, which tells of the riches that allegedly has Prime Minister Dmitry Medvedev. Medvedev and his representatives refused to comment on these revelations, pointing to the political ambitions of Bulk and judicial sentences handed down to him.

In most cities the protests, under various pretexts were not agreed by the authorities.

In Moscow procession on Tverskaya street was not agreed upon, law enforcement authorities warned residents from participation in the event.

According to the Main Department of internal Affairs in Moscow, at an unsanctioned anti-corruption protest was about 7-8 thousand.

First, the riot police tried to push people off the road on the sidewalk. House district 19 in Tver (little short to Pushkinskaya square) there was a stampede, said the correspondent of Russian service bi-Bi-si Andrew Opener.

In Moscow have been detained more than 130 people, according to his Twitter group monitoring political persecution OVD-info. Begins to receive information about where to take the detainees in Moscow: at least one van went to the police station Voykovskaya.

During the arrest, the police applied batons, beaten and over, reported from a place of events our correspondent Olga Ivshina.

Among the detainees was a correspondent for the British newspaper the Guardian Alec moon. Loong warned police that he was a journalist.

However, grabbing a few dozen people, police were ordered to retreat and moved, said Olga Ivshyna, who was near the building of the riot police. The people who came to the area, yet don’t disperse.

People gathered at subway stations on the route of the planned March on Pushkin square at the Belarusian station, from Mayakovskaya metro station and Manezh square.

In St. Petersburg at rally on the campus Martius went out about ten thousand people. Some of them chanted: “the Germans are not forgotten!” and “No to war!”.

St. Petersburg opposition spontaneously decided to go to the Champs de Mars on the Palace square, where protesters surrounded police, according to “Medusa”.

In the cities of the Far East detained dozens of protesters; the action took place in Siberia and the Urals.

Mayor of Yekaterinburg Yevgeny Roizman in his Twitter praised the protesters. “Yekaterinburg! The lads who came out. A very worthy”.

In Krasnodar, according to reports of different participants on Twitter, the meeting broke up smoke bombs.

Official estimates from the interior Ministry yet, but according to witnesses, the most numerous stocks at this time took place in Novosibirsk, Irkutsk, Krasnoyarsk and Vladivostok.

After the success of the movie “He’s not Dimon” has received more than 11 million views only on YouTube, Alexei Navalny urged his supporters to go out “in support of the requirement to investigate the facts of corruption of senior officials of Russia.”

Earlier, Medvedev’s press Secretary Natalya Timakova said that it did not intend to comment on the “propaganda attacks the opposition and the convict character, who said that he already has some campaign and fighting the power.”