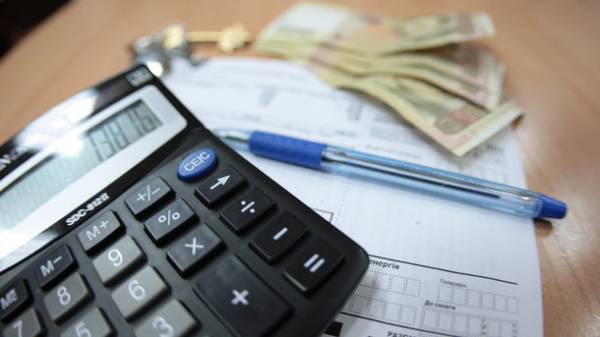 Government are talking about the monetization of subsidies on utilities: the other day President Petro Poroshenko said that “these payments will be monetized as required by the IMF.” Details are not announced neither the President, nor his press service. “Today” figured out what you mean.

AS IT IS NOW. Recall: if the grant is assigned, its recipients do not pay the full amount for the “communal”, and the difference, which is not subsidized by the state. The subsidy is given within the standards, for example: heating — 21 sq. m of housing per person plus 10 square metres per family, hot water is 1.6 cubic meters per month per person, the cold is 2.4 to 4.4. Anything over that is charged at full cost. The state shall pay the utility its part for each subsidized. But, as acknowledged by the Minister sotspolitiki Andrey Reva, most of the calculations of utility companies is in the clearing (mutual offset) form, not in cash. For example, communal CHP should state “Naftogaz” for gas, and the state has the CHP for heat, in the end, the debts vzaimopomoschi. But this scheme does not work everywhere, for example, with condominiums, the classification is impossible, because the Treasury does not have to, and grants to its members based on. In the end, the condominiums paid their money for subsidized public utilities, and to obtain compensation from the state can’t. And after the monetization of this problem will be solved.

THE AUTHORITIES AND EXPERTS. In the Ministry say that the “real” money to give to hands, no one will. “When we talk about monetization in the sense as it requires the IMF, talking about the fact that no offsets, not that we gave a grant of money for utility services to a person who will pay for these services,” explained Reva. Terms of monetization, he is not called, but a source in the Cabinet told us that innovation is planning to introduce new topstone, i.e. from 1 October.

The main obstacle experts see poverty of the Treasury. For example, a senior consultant at the social protection Institute of local development Anton Levitsky told us that now more than 50 million subsidy money to public utilities to pay 10%, the rest is clearing. “It is unclear where in the budget there will be funds, says Levitsky. — But if the scheme will work, it can be extended up to each recipient of subsidies”. Head of the Secretariat of the Council of entrepreneurs under the Cabinet of Ministers Andrei Zablovsky also notes that the monetization of subsidies could be the first step for the full Secretary: “While the monetization of benefits can be worked out as the financial mutual settlements between government agencies. The next step is the creation of accounts for claiming the incentives, subsidies, issuing the plastic cards. There, the state would list the funds that can be spent only as directed. For example, for payment komuslug public transportation. This Secretary will bring Ukraine closer to international standards assistance to the poor. In the US, the long running food stamp system, or the program of preferential purchase of goods. The state gives the residents low-income monthly benefits on plastic cards. It’s somewhere in the $130 per person, and the money can be spent solely on food. The procedure is transparent and does not cause disputes.”

Beneficiaries will count on e-tickets

The adoption of the law on the introduction of the electronic ticket in transport may be the first step towards the monetization of benefits, experts say. It is expected that the turnstiles and scanners will appear in trolleybuses and buses of Kiev, Lviv and other major cities this year due to money gorbyudzheta. “The benefit of free travel is the most popular, so you should start with her, says Levitsky. To preferential categories of passengers could pay the fare, the local authorities must issue them a special travel card like card of the citizen, according to which retirees are now free ride the subway. In the first stage, which may last a year or more, it will be clear, the percentage of benefit recipients. This will enable the Cabinet to assess how much it will cost monetization of travel. But after the monetization it will no longer be unlimited, seniors will be given money, say 10 to 15 trips per month in the clinic, social security, the market for food, rest at your own expense”. The Ministry of social policy said that in 2017 the monetization of benefits on travel would not be as they are in the budget did not include money.