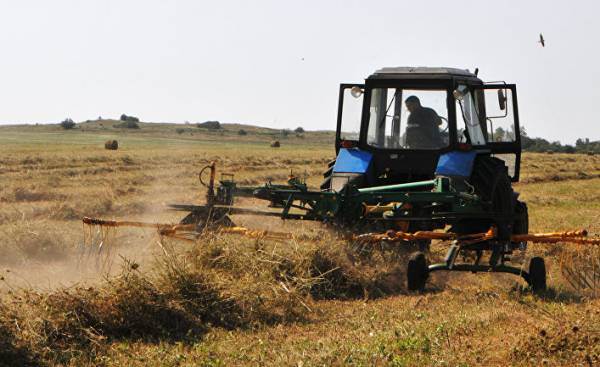 Significantly increasing domestic agricultural production through special incentive measures, Russia continues to reduce imports of food and use the tool of sanctions against foreign countries, including Turkey.

Data released by the Federal customs service (FCS) and the Ministry of agriculture of Russia, indicate that due to an embargo on the importation of food to Russia over the past two years on the Russian market there was a significant increase in the share of domestic agricultural products.

During the first 11 months of last year imports of tomatoes, which are still prohibited to import from Turkey, declined by 30.7% compared to the same period in 2015, and now stands at 419 thousand tons, and import of cucumbers fell by 10.7% and amounted to 97.4 metric tons.

From other foods that were included in the list of prohibited to import products from Turkey, import of onion decreased by 41%, to 185 thousand tons, the import of cabbage — 49.1%, falling to 90 thousand tons.

In this greenhouse vegetable production in Russia last year increased by 8% compared to the previous year and amounted to 691 thousand tons thanks to the newly built winter greenhouses with a total area of 160 hectares.

The main reason for sanctions is to support Russian agricultural sector?

In a period when the Russian products began to take the place of foreign, that now I can not get on the Russian market, from meat and dairy products to many types of fruit and vegetables, banned for import from the European Union, USA, Canada, Norway, Australia and Turkey, Russian officials are not inclined to cancel these sanctions.
Close to sector sources, and messages that are reflected in the Russian media indicate that the main reason to maintain sanctions, including taboos imposed on Turkish food products, is to support Russian agriculture industry.

Prime Minister of Russia Dmitry Medvedev made the other day the statement noted that domestic producers should take advantage of the favourable situation which has arisen on the Russian market due to sanctions.

Medvedev, noting that, despite the economic crisis, the Russian agricultural sector is growing at 3% a year on average, said that this year from the state budget will also be provided agricultural support in the amount of 220 billion rubles (about $ 3.7 billion).

And Minister of agriculture Alexander Tkachev made some time ago, the statement drew attention to the fact that last year the country reached self-sufficiency in vegetables is 90%, and continued: “To achieve full self-sufficiency in vegetables, particularly tomatoes and cucumbers, by 2020 requires the construction of greenhouses is not less than 400 hectares per year”.

The President of the Russian Union of producers of vegetables Sergei Korolev said that in 2016 the share of imported tomatoes in the Russian market decreased from 80 to 50%, and the import of cucumbers from 65 to 20%.

Experts point out that, since the introduction of the food embargo on some products in response to EU sanctions in 2014, it was produced by the domestic grocery products worth about four billion dollars.

The moves of Russia in the field of agriculture

After the collapse of the Soviet Union concrete steps towards a rational use of the vast agricultural lands of the Russian government was able to take in only 2000 years.

During this period a major move aimed at reducing food imports, is considered a “new land law” was passed in 2001, allowing the creation of private farms like those that exist in Western countries.

But because in the field of agriculture in the country things were not as expected, the Russian government in 2012 announced a new programme for the development of agriculture and to provide features such as loans with low interest rates for farmers, to support domestic producers of fertilizers, agricultural equipment, and Finance agricultural infrastructure.

When to these stimulus measures that the government undertook in the field of agriculture, adding retaliatory sanctions imposed in 2014, primarily against Western countries, and later Turkey, the Russian agricultural sector in some regions of the country became, you might say, “even more profitable than oil”.

Last year total exports food products to Russia, which in 2015 became the world leader in the export of wheat, one of the most important products for export, selling for export 25 million tons, has reached 20 billion dollars and took second place after energy products.

However, some Russian experts believe that blocking people’s access to quality products when you use sanctions for development of the agricultural sector cannot be a long-term strategy.

It is emphasized that it is still unclear what will be the strategy of the Russian government after the lifting of sanctions and opening of market for all, and for how long support is currently available to Russian farmers? Also voiced the view that Russia is using agriculture, and thus “punish” certain countries.