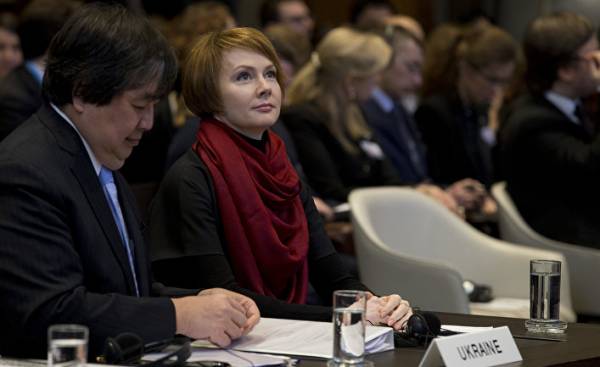 Olena zerkal, Deputy foreign Minister for European integration, spoke on Monday at the International court of justice as the representative of Ukraine (the agent of Ukraine, in accordance with the terminology of the ICJ).

In addition, the position of the Ukrainian side in the Hague was presented by American Professor Harold Hanji Co., and also Marnie’s cheek and Jonathan Gimblett, partners legal company Covington, and has an agreement with Ukraine on representation of interests of Kiev in the international courts.

“European truth” represents to your attention translation of the rather emotional speech Olena zerkal, opened historic hearings at the Hague in the case of “Ukraine against Russia.”

Mr. President, distinguished members of the Court. It is a great honor and exceptional privilege to speak today before the principal judicial organ of the United Nations on behalf of Ukraine.

Ukraine appealed to the Court for protection of fundamental rights of the people of Ukraine, who have experienced violations of international law by the Russian Federation.

Today I ask the Court to impose interim measures to prevent irreparable violations of human rights during its consideration of this case by the Court.

Thousands of innocent Ukrainians have already felt the deadly attacks, but millions remain under imminent threat. Their peaceful everyday lives are destroyed, and their fundamental rights are blatantly violated one of the permanent members of the UN Security Council — Russian Federation.

In the occupied Crimea Russian Federation completely violates human rights, implementing the policy of cultural destruction and discrimination. Such actions are unacceptable to the international community. They were condemned by the UN.

The Russian Federation’s foreign policy, regardless of human life, and uses any means to impose their will.

Tactics of the Russian Federation includes the support of terrorism and acts of racial discrimination, propaganda, Subversion, intimidation, political corruption, cyber attacks. With this reality, we face in Ukraine. The Russian Federation has continued this behaviour for three years, all the while denying his multifaceted aggression against Ukraine.

Today I stand before the Court and asked to defend the fundamental rights of the Ukrainian people. We demand justice and the international legal responsibility, while the Russian Federation continues to demonstrate disregard for its obligations under international treaties. As a result, the Ukrainian people subjected to prolonged campaigns of terrorism and cultural destruction. The situation is really terrible.

In the last few weeks rates have been raised. By Russian-backed illegal armed groups have increased attacks and increased the degree of intimidation of the civilian population. In Avdeyevka in the week from 29 January to 5 February, the OSCE monitoring mission confirmed at least 8 deaths of civilians and 30 of the cases they received wounds. The indiscriminate shelling of the city were largely destroyed residential buildings and critical infrastructure, the civilian population was left without electricity, water and even heating during severe frosts.

Within two months from the beginning of 2017 the number of shells that were used for the shelling of the Town is estimated at 15 thousand units.

This amount corresponds to 14 wagons brim full of ammunition. At the same time the official representative of the Russian President publicly expressed the hope that the Russia-supported illegal groups will not be left without ammunition.

Can there be any doubt where it supplied arms? No. It comes from Russian Federation.

Attacks against the peaceful Ukrainian population are a logical continuation of the support which the Russian Federation has groups that commit acts of terrorism in Ukraine.

Shot down by a Russian system “Beech” aircraft flight МН17не stopped the financing of terrorism Russian Federation. With the constant support from the Russian attack occurred on a bus in Volnovakha. Two weeks later, was fired Mariupol, and Kramatorsk — a few weeks after that. In Kharkov, civilians were intimidated by the series of explosions.

These events were not accidental, being a consequence of the support of the Russian Federation of terrorism in Ukraine.

Meanwhile, in the East of Ukraine civilians suffer from indiscriminate attacks, in occupied to the Crimea the Russian Federation continues to implement the Soviet approach to human rights, suppressing groups that consider their enemies. Recently, 11 of the Crimean Tatars who peacefully gathered to protest against the random searches, were forcibly detained. This is another example of how the Russian regime silenced those who arouses hostility.

In this case Ukraine wants compensation for Russia’s continued violation of two international treaties: the International Convention for the suppression of the financing of terrorism and the International Convention on the elimination of all forms of racial discrimination. Advisers of Ukraine will lead a detailed justification of the nature of our claim and the reasons why the introduction of temporary measures is an urgent necessity. Before they do, I intend to give a brief historical context to demonstrate that the current events in Ukraine do not occur in isolation from the previous one.

Since the restoration of independence of modern Ukraine after the collapse of the Soviet Union, the people of Ukraine tried to implement democratic values, to set the human life and the dignity of the Supreme value of the state and society. In contrast to many other postcommunist countries, Ukraine has never been tension on ethnic grounds. The Constitution and related legislation establish a comprehensive system of protection of the rights of ethnic groups, as confirmed by UN observers and the EU.

Terrible news about the terror against the civilian population seemed to be something that happens far away from us.

The transformation of Ukraine and strengthen ties with the European Union became the cause of special irritation to Russia. The Russian Federation threatened to destroy the economy of Ukraine, imposing punitive, unilateral trade restrictions, tried to freeze the Ukrainians, stopping the supply of gas in the cold winter season, questioned the territorial integrity of Ukraine.

In the last decade, the intervention of the Russian Federation in Ukraine is constantly deepened.

It has reached dangerous new levels in 2014. The Russian Federation decided to intervene in Ukraine with use of military force; to support illegal groups that commit acts of terrorism on Ukrainian soil; to violate the rights of millions of Ukrainian citizens, including, for many of them, the right to life.

This reflects the behavior of the Russian Federation in a broader context, which, unfortunately, we are all familiar.

As the Deputy Minister of foreign Affairs I’m dealing with all these issues. But today I stand here as a representative, as the agent of Ukraine, and as such, my priority is right, not politics.

For nearly three years, I personally conducted negotiations with the Russian Federation regarding these legal disputes. I admit that it was very difficult. From time to time the Russian Federation has rejected the protests of Ukraine regarding violations of the provisions of international treaties. Our objections are not taken seriously, we repeated over and over that we have no real dispute. After that I came home and saw with my own eyes, as the Russian Federation continues its campaign against the Ukrainian people.

After numerous attempts it was time to admit that enough already.

At the same time, our request is very modest.

All we seek is stability and peace in an unpredictable and dangerous situation. Mr. President, members of the Court, in light of the imminent danger that looms over the people of Ukraine, I urge you to install temporary measures. Our esteemed legal adviser to explain the reasons why the Court should ensure us that protect.

First, Professor Harold Hongi To present an overview of the applications of Ukraine and our petition on the introduction of provisional measures.

Second, Ms. Marnie chick explain the need for the introduction of provisional measures in the International Convention for the suppression of the financing of terrorism and demonstrate that all criteria for imposing them are met.

Thank you, Mr. President and distinguished members of the Court.