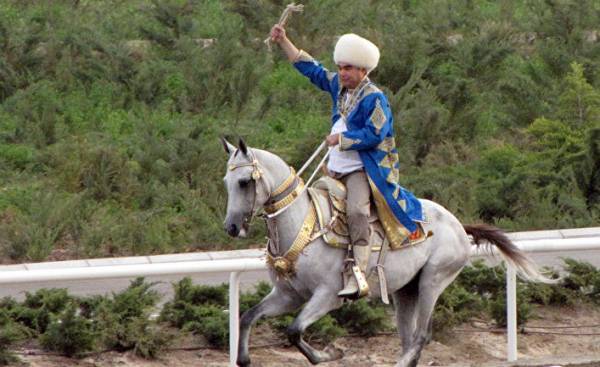 Gurbanguly Berdimuhamedov, the main rider, jockey, surgeon, writer, singer and composer Turkmenistan — loves to put on a show. But the most empty of them organized ideas seem to be forthcoming presidential elections in which he again extend his term at the helm of the country.

Mode Berdimuhamedov considered one of the most repressive on the planet. His power is so absolute that he managed to turn the groveling subordinates in a special form of the performing arts.

But not so simple in the world of state and society. Coming 12 February elections, which experts in the region called the simulation will take place against the background of unpleasant and problematic for the authorities of realities.

“Elections will be held at a time of unprecedented economic crisis. The refusal of the regime to acknowledge the crisis during the election campaign makes these elections one more step towards the collapse of the state,” said EurasiaNet.org Anceschi Luca (Luca Anceschi), leading a course on Central Asian studies at the University of Glasgow.

The degree of isolation of Turkmenistan is such that it is very difficult to predict exactly how much damage to the economy caused the fall in world energy prices and the recent loss of two major gas customers — Iran and Russia.

Even the international monetary Fund, usually provided by the host Ashgabat official statistics at face value, in December, made some sobering statements.

“Hydrocarbon prices remain low, and the country practically does not acquire new trading partners. Under the influence of these external factors, the growth rate of the economy of Turkmenistan has declined,” reads the IMF statement following the visit of the delegation of the Fund of the Central Asian state.

State television could not completely deny this fact and announced in early February that GDP growth fell to 6.2% in 2016, compared to 6.5% a year earlier. But these figures are considered unreliable and real growth rates almost certainly much lower.

“The scale of the crisis of the imagination. There is a shortage of food, and the government forbade citizens to fish. We know that the population of Central Asia is patience, but Turkmenistan is fast approaching the point of no return. It is difficult to imagine a bright future for the gas state, does not receive any, or almost no, income from energy exports,” added Anceschi.

During the so-called election campaign Berdymukhamedov has carefully avoided any reference to the crisis and engaged in conduct typical of the PR actions.

For example, he recently spoke to employees of the energy sector with his own song. This musical performance was widely covered in the Russian media, and even drew the attention of the British newspaper the Guardian. At the event, the workers themselves first sang for the President on untuned guitar, and then made Berdimuhamedov is already perfectly tuned instrument and, of course, to the applause of the audience.

But this gift from the leader of the nation was not over. “The participants were surprised to learn that the head of state prepares women a gift on March 8 — a few personally written songs,” — said the Turkmen state news Agency.

Such actions are part of a well-oiled machinery for the creation of myths. In the first years of his reign Berdymukhamedov, who came to power in 2006, has consistently positioned himself as a man of action, participating in races and winning races. Partly the way he tried to distance himself from his predecessor, the eccentric and nothing does not deny Saparmurat Niyazov (the official version, died of a heart attack in December 2006). Demonstrating the versatility of their talents, Berdimuhamedov in 2009 even personally performed surgery to remove the tumor on the patient’s head.

Emphasizing the generosity of the Turkmen leader, state media reported in late January that Berdimuhamedov during his visit to the region Ahlskog personally handed out gifts to residents, including televisions. Although such tricks are not formally recognised as part of the campaign, their conduct shows exactly that.

Although the conditions of a rigid police state no one dares to complain, some media, including Radio Azatlyk, the Turkmen service of RFE/RL was able to capture the effects of the economic downturn.

In the country, including the capital, have been hard to find on store shelves even the most simple products, like vegetable oil and sugar. As for what else you can get, including bread and meat, worth an exorbitant price.

According to Radio “Azatlyk” February 6, the authorities began to take measures to curb rising prices.

“For the past few days, the employees of the tax service, city administration and trade organizations go to markets, forcing traders to sell their goods at fixed and reduced prices,” he told Azatlyk on condition of anonymity, trading in one of the markets of Ashgabat.

The shortage of food and cash has forced the authorities to come up with ever more draconian methods to prevent information leaks. In particular, Internet service providers take measures for disruption of the virtual private networks (VPNs), which are usually used by the citizens of repressive States to visit blocked websites.

In addition, on those few journalists that still dare to do their job, prosecuted.

For example, independent journalist, hudayberdi Alesova arrested on 3 December with his wife and mother on suspicion of possession of chewing tobacco, which is banned in Turkmenistan. According to reports, the reporter then tortured and forced to confess to possession of 11 kilograms of tobacco. Since nothing is known about his whereabouts and condition. Allshow to arrest for two months, wrote about the shortage of food.

Trying to create the appearance of competitive elections, the authorities this time allowed to participate in the presidential race, representatives of non-governmental organizations. All contestants are running nine candidates. But given created in Turkmenistan conditions, it seems unlikely that the results of these elections will differ significantly from the vote 2012, when Berdimuhamedov received 97% of votes.

“In Turkmenistan has never held free and fair elections, and this time is no exception,’ said Hugh Williamson, Director of Human Rights Watch’s Europe and Central Asia. — These elections are impossible in a country where authorities tightly control all aspects of society”.