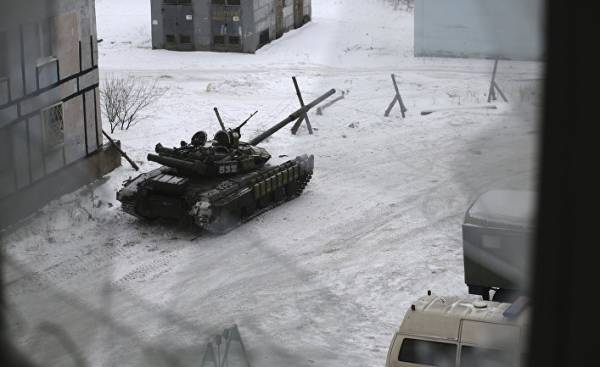 Exactly two years ago to the day was signed by the Minsk-2 agreement. After an all-night negotiating marathon 12 February 2015 the leaders of France, Germany, Russia and Ukraine adopted a document on measures to implement the Minsk agreement designed to put an end to the hostilities in the Donbass. The document provides for the introduction of ceasefire, the creation of a demilitarized zone at the contact line, the call to dialogue and special status for Donetsk and Lugansk.

However, two years passed, and the first item on the cessation of hostilities is far from complete. Worst of all, the fights going the last few days near the Town (6 kilometers from Donetsk, the stronghold of the rebels) were the most violent since the last cease-fire in 2016.

The escalation of the conflict coincided with the visit of President of Ukraine in Berlin last week. In the German capital, Petro Poroshenko met with German Chancellor Angela Merkel to resume the support of the first European powers in the struggle against Kiev so-called “Russian aggression”.

Thus, the Ukrainian leader asked the German Chancellor to support sanctions against Moscow until the full implementation of the Minsk agreements. According to Kiev, the responsibility for the failure of the agreements lies on Russia, which, however, is not mentioned in the Protocol signed in Belarus. What specifically is referred to in the agreement of 2015?

The agreement of 13 points

In the first paragraph we are talking about an immediate ceasefire in parts of Donetsk and Lugansk, beginning February 15, 2015. That is 72 hours after signing the document. It should be noted that the cessation of hostilities referred to in the first paragraph of the agreement does not mention the conflicting parties. Thus, the presence of Russian troops is not officially recognized parties have signed the document.

The second paragraph deals with the establishment of a cease-fire. It envisages the creation of a “buffer zone” on the contact line width of 50 km and defines a mechanism for withdrawal of heavy weapons. This phase should begin and be completed within 14 days. At this time, the document mentions the warring parties, namely the Ukrainian troops and armed groups of certain regions of Donetsk and Lugansk regions. The agreement, signed by Kiev, does not mention the presence of Russian troops. Also in the document there is no hint of direct or indirect military support from Moscow. As will be seen in this article, the alleged presence of little green men or the fact that deliveries of Russian weapons are completely absent in the document. It only strengthens the position of Russia, which from the beginning of the conflict, denied any involvement.

The third paragraph is limited to responsible for the supervision and control of the cease-fire and withdrawal of heavy weapons in the face of the OSCE.

After this phase is completed and guaranteed the security of the population, the warring parties are invited to initiate a dialogue aimed at finding a political solution to the conflict in accordance with the legislation of Ukraine. For this reason, in the fourth paragraph of the contract we are talking about the need to create areas of special treatment, which gives them more independence. The document States that in order to strengthen regional autonomy, the Ukrainian Parliament, thirty days after signing the contract, should adopt a resolution indicating the territory covered by the special regime.

The fifth paragraph requires that Kiev has provided a full pardon without any conditions or exceptions for persons involved in the fighting against the Ukrainian army. Pardon should be the result of the law adopted by Parliament and should apply to all persons involved in the event. Thus, the government refuses to prosecute those who could participate in actions which may constitute war crimes.

According to paragraph of the Amnesty without any conditions and exceptions, the government in Kiev and militias of Donbass called for the release of all prisoners on the basis of the principle “all for all”. The sixth paragraph States that this process must be completed no later than the fifth day after the weapons withdrawal.

The seventh and eighth points of the Minsk agreements emphasize the need to restore the socioeconomic relations of the population affected by the fighting. To this end, the parties undertake to provide humanitarian assistance, as well as the payment of wages and social benefits.

The ninth point calls for the territorial sovereignty of Ukraine. To this end, the government must “restore full control over its external borders”. And here Poroshenko administration missed the opportunity to include in the document any mention of the role of Russia, accused by Kiev of supplying weapons and fighters across the Eastern border controlled by the militia.

The tenth paragraph is perhaps the most discouraging for those who advocate the position of Kiev in the conflict in the Donbass. It provides for the withdrawal from Ukraine of all foreign armed forces and mercenaries. Limited to the wording “foreign” document relieve Russia of all direct charges in the active participation in the conflict as in the volunteer battalions from the Ukrainian side also fighting foreign militants.

Finally, the eleventh paragraph of the agreement requires constitutional reform to ensure, once and for all decentralization as a key element of governance in Ukraine. At the end of this stage, the twelfth paragraph provides for the holding of local elections in the Donetsk and Lugansk regions in accordance with Ukrainian legislation.

The thirteenth paragraph stresses the importance of the Trilateral Contact group, which includes representatives of OSCE, Kiev and militia of Donbass and Luhansk, in order to facilitate the implementation of the road map agreed upon by the signatories to the agreement.

Between agreements and media statements

Russia’s participation in the armed conflict in Ukraine is very real. In addition to numerous witnesses confirming the presence of Russian troops in the Donbass, it is obvious that the rebellious region is unable to provide effective armed resistance to the national army (supported by the international community) without relying on outside help. In a conflict that lasted nearly three years, we must admit that the delivery of weapons to the East of Ukraine and logistical support are necessary to counter the military action waged by the government of Poroshenko. No regional player, except Russia, is not interested to play that role.

However, the document signed in Minsk in 2015, does not impose on Russia any responsibility. Russia’s intervention in the war in the Donbass are not reflected in the agreement signed by Kiev. Words like “Russia”, “Moscow”, “Kremlin” or “Pro-Russian militia”, not present in the document. Thus, the charges against the Slavic giant in the failure of the implementation of the roadmap seem untenable.

In the weeks preceding the talks, the Ukrainian forces have been weakened, while the militia advanced swiftly. This may explain why Poroshenko was in a hurry to establish a cease-fire regardless of the consequences. However, it was unreasonable for a public figure to sign international agreements, without demanding anything from Moscow, and then to accuse the Kremlin of violating the terms of the contract.

Consequently, the Ukrainian President has two choices — either he ceases to accuse Russia and starts a direct dialogue with the leaders of Donetsk and Lugansk, as envisaged in the agreement, or refusing Minsk agreements that do not protect national interests of Ukraine in the view of the government of Petro Poroshenko.