In the classroom deals with about ten guys. Mike, sitting in the second row, reads the text from his notebooks.

He speaks Estonian, but with a Russian accent. Grammatical errors are corrected by the teacher Rina Kazachenko (Riina Kazatsenko). She teaches at is located in the center Kohtla-järve high school the official language is Estonian.

A lot of students, because only 10% of residents are Estonians. In the city mainly speak Russian. Every fourth inhabitant of Estonia considers Russian to be their native language.

“If at home the child will say that the Estonian language is not necessary, because if I didn’t need it, you don’t will need, and then the result is obvious,” — said Kozachenko.

Kids homework to learn by heart a poem of the beloved Estonian writer Ellen NIIT (Ellen Niit) “Winter song of the bear”. Then the teacher asks who, as agreed, watched the evening news on Estonian channel. Not one hand went up.

— We have no Estonian channels — responsible children.

In Kohtla-järve are Russian TV channels. TV dish is decorated with a brick house Stalinist and Soviet-standard construction.

The main building in the Central square of the city is a shopping Mall. Previously, there was a cinema “Victory”. From its walls you are greeted sickles, hammers and five-pointed star. The owner of the building decided he would leave them when doing repairs. In the same spirit has been repaired and the Palace of culture Kohtla-järve.

In other territories of the former Soviet Union, such as Lithuania and Ukraine, all these characters are destroyed.

“From history is not going anywhere. We can’t pretend that it started only 26 years ago, when Estonia gained independence,” — says the entrepreneur mark Fedorov.

He was born 25 years ago, in the same year when the Soviet Union collapsed.

The city is dominated by mostly yellow and gray. Built in the Stalin era might look nice, but they are under the protection and deteriorate without repair.

“The facades had to be repaired in accordance with the standards, but no money,” explains Fedorov.

The revival of the city is one of the themes of the campaign Fedorov. Young man wants to engage in politics in your County to solve the issues of life of the city.

A natural choice would be a government of the Centrist party of Estonia, which is presented in Kohtla-Jarve and other counties, where the majority of the population is Russian. In the forthcoming autumn of this year elections, the Centrist party will be even harder to advocate for the advancement of Russian-speaking population.

It is not surprising, but mark Fedorov says he will seek to become an MP from the Party of reforms of Estonia, the representatives of which consider Russian minority as a threat to internal security. He believes that ordinary people can make a change in Kohtla-järvi.

Mine are visible and felt in Kohtla-järve everywhere. Piles initially turn the flat silhouette of the city in the hills. Hair stick, the smell of gas hit in the nose. Even the Central Park of the city is broken up around the mine.

The territory of the Kohtla-järve for centuries was just scattered villages and estates. Then, in the bowels of the County IDA-Virumaa Estonia it was found the gold and oil shale. It United all the villages in one city.

The Germans also understood the value of oil shale. Mine IDA-Virumaa supplied fuel and fuel Nazi Germany. Jews were taken to labor camps from the occupied Ostland, mostly from Lithuania. Came after the Germans the red army soldiers found the bodies in the mines. In Kohtla-järve the Red army is still remembered as a liberator. The end of world war II is celebrated on may 9. On this day, the residents of Kohtla-järve gather at the monument to the victims of the Second world war, and the representative of the Russian Embassy lays wreath at the monument.

Black and orange St. George ribbons, symbols of Russia, you can see here and now.

In the years of Soviet power the mining of oil shale turned out in full force. Mine provided well-paid jobs, and in Kohtla-järve drove thousands of people from all over the Soviet Union. The city began to build, and Estonians have become a minority.

Then I changed the time, and the industry. Jobs disappeared, the population flow changed direction.

The County IDA-Virumaa has for many years headed the list of areas with high unemployment. The income levels here are lower than in other regions of Estonia. The number of inhabitants of Kohtla-järve is decreasing every year thousand due to the migration.

Over the ice stadium stretched a banner with the inscription “Our hockey, our victory” and an emblem of the city of Kohtla-järve.

In Estonia hockey plays mostly Russian-speaking population. In the stands shivering a dozen parents at a side of the box two father shouting instructions passing them to offspring.

On the ice, the players carefully watching Alexander Smetanin. He coached the youth team of Kohtla-järve “Everest”.

Smets was born in Kohtla-järve. In the 1980s, his own coach came to recruit young players in a kindergarten. Smets remembers how they rode behind the coach, holding the rope.

“Then we had forty people. Now I of their players even teams not to collect,” he says.

Team amplify players from Tallinn, Tartu and Narva. Then go to St. Petersburg, where “Everest” playing in his age group.

Petersburg, which is on the other side of the border, many residents of the County IDA-Virumaa is a popular destination. The border can be crossed with a Russian passport or a so-called “gray” passport without a visa. Gray passport — a travel document for persons without citizenship. This passport is in 80 thousand Estonian Russians.

The 36-year-old first Smetanina also had a grey passport. At age 18 he left to play professional ice hockey in Belarus and Russia. There, he received Russian citizenship.

After 10 years of work became less, and he returned to Estonia. He learned Estonian and passed the exam for citizenship. Now he has a passport of Estonia, his wife and three sons in Kohtla-järve.

“I know that I would survive anywhere, but Kohtla-järve is my home,” he says.

My family loves his native land, as all the inhabitants of Kohtla-järve.

Three years ago, immediately after the capture of the Crimea, representatives of the international media arrived in IDA-Viru County with the aim to find the separatists among Estonian Russians. It was thought that the County, which is home to the Russian minority will be the next area of unrest. But instead of little green men reporters found the usual residents of small towns with their normal problems.

The majority of Estonian Russians do not understand the statements of the General population of the country in which the Russian-speaking population require integration into Estonian society. For them, Estonia is home. Children grow up, speaking in Russian, but under Estonian flag.

“Here people work a lot and try to live with dignity. When working struggling where you are now, what is happening in the world plays a big role,” says Smets.

People stand and sway to the music. Some raised their hands, others they are stacked together. Started a Church service. The choir consistently performs the gospel — polyphonic rhythmic songs.

“Bless the Russians, Estonians bless, bless all the living,” proclaims the priest in between songs.

At first glance it seems that the Church community consists of people of the middle class and all, without exception, happy. However, if you look closely, on many you can see the traces of a hard life.

Many of the participating in the service were former alcoholics and drug addicts. Those in Kohtla-järve much. Social problems became more, and through the Eastern border stream of cheap alcohol and other products.

“Three times I was in prison and six years of living in the warehouse,” says 58-year-old Valery Serebryakov after service.

One morning he woke up after another drunken feast and saw near the door of the warehouse pack full of food.

“I thought that once again, someone robbed,” recalls Serebryakov.

A few days in the warehouse came two Ministers of the Church who brought food and Serebryakov God’s Word.

His 38-year-old wife Olga almost the same story. It saved Vladimir Vasin, an activist Methodist Church and support of all addicts and alcoholics.

Gloomy appearance Vasin himself in the past was a drug addict. It is like no other have seen, but does not consider Kohtla-järve hopeless place.

“It all depends on how the person perceives himself. Can’t say that there are no opportunities,” — says Vasin.

In the South of Kohtla-järve is a neighborhood with a surprisingly familiar for the Finns name. Outokumpu is one of the most desired locations for living, and for good reason.

Outokumpu neighborhood built in the 1970-ies project of the Finnish sister city of Outokumpu. In North Karelia, in turn, is the area of Kohtla-järvi.

These houses may not be more than five stories, because the plots are tunnels and on the surface it is impossible to create a significant load.

The family Karanina in Outokumpu two apartments in one entrance, because for ten children one apartment would not be enough.

Three oldest have moved to Tallinn. The oldest 22-year-old Kirill is studying in the Maritime Academy, 21-year-old Daria in Estonian Academy of music and 20-year-old Simeon at the police College. But they’re going to come back.

“Our family motto is — where was born there and useful”, — says Kirill.

Daria learns and works at the local music school.

“Kohtla-Jarve gave me a lot. Now it’s my turn to give him something in return,” she says.

Dreams of children from families Karenina are no exception. Many of their friends also plan to return to your home.

Many learned the Estonian language in educational centers. Have them in your pocket is an Estonian passport, because the generation born after the liberation of Estonia, gets it automatically.

Mines not sad anymore, because education opens the way for other work. One of the piles of IDA-Virumaa was turned into a ski slope and in the mine of the neighboring County opened the Museum. They have become popular tourist attractions.

Young Estonian Russians are responsible for the future of society, but the opportunities of his native land attracted them, too. Kohtla-Jarve is being built again from the ashes can be reborn a beautiful city. 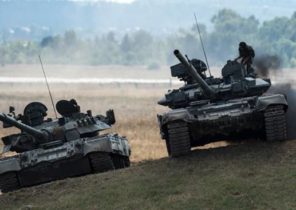