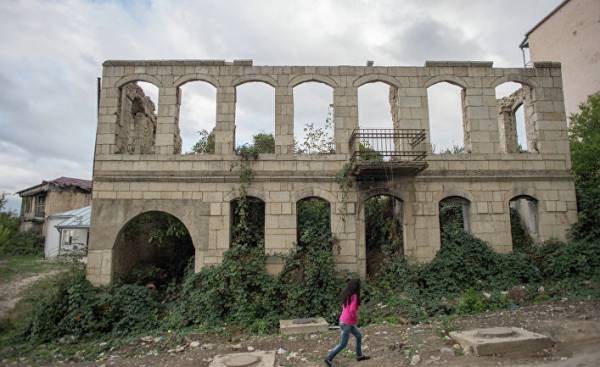 The latest report from the International crisis group (ICG) on the Karabakh conflict have given rise to different reviews in Armenia, Azerbaijan and Nagorno-Karabakh. The report, entitled “In the sky of Nagorno-Karabakh accumulate clouds of war” referred to a sharp increase in the threat of war, the escalation of tension that, in the opinion of the authors of the report, can very suddenly lead to large scale military action.

However, there are experts who do not agree with the analytical part of the report and believe that in the conflict zone the situation of “not war, not peace” can be maintained for a long time, until the balance of forces.

The expert from the International crisis group, co-author of the report, Olesya Vardanyan believes that in the course of compiling this report was done rather extensive work. Conducted over one hundred interviews in Armenia, Azerbaijan and Nagorno-Karabakh.

“We came to the conclusion that the probability of war in the conflict zone is quite high, taking into account many factors. We talked to different experts, to ordinary citizens and officials of all parties. It turned out that after the April military clashes, proshlogo informed the parties to the conflict have further strengthened their approaches. In Azerbaijan argue that in the absence of progress in the negotiation process, they can use new actions to return the territories, and the Armenian side note that ready for war and in case of resumption will not be protected, and will proceed to counter attack, moving into the territory of Azerbaijan”,- said Olesya Vardanyan, adding that the factors and the mood of the resumption of the war “has not disappeared, moreover, they strengthen it.”

According to the expert, speaking about the likelihood of war, the report seeks to focus international attention on the problem.

7 June in the “Media center” held a debate with the participation of Olesya Vardanyan, Director of the Caucasus Institute, political scientist Alexander Iskandaryan and Director of the Armenian Institute for international Affairs and security Affairs Stepan Safaryan on “Why international krisitna group predicts the threat of war in the Karabakh conflict zone?”.

A different opinion is Aleksandr Iskandaryan who believes that the report of the ICG should be considered in two dimensions — describe and analytical. “First, with regard to describing the piece, the report is very well and conscientiously. Collected base of facts and well presented” — he said.

On the other hand, however, in his opinion, the report is lame in the analytical plan. “Signals about the threat of war was always in the reports of the ICG. I do not remember that. Of course, there is the threat of war, however, the report does not say how and by what mechanisms it can start. It says that if there is a threat, then it may be a war, but how, then, does not say,” – said Iskandaryan, adding that on the contrary, in Karabakh after the April events, the probability of resumption of large-scale war is minimal.

According to him, the April clashes demonstrated the balance of forces in the conflict zone. “After that, the alignment of forces changed in favor of Armenia, and I can’t imagine a large-scale military actions,” he said.

A participant in the discussion Stepan Safaryan turned to the forecasts contained in the report on the probability of involvement in a possible war in the Karabakh conflict zone between Turkey and Russia.

He, first, sent a question to the co-author of the report about whether based these predictions on concrete information received from Turkey and Russia, or is it just flowing out of the report findings? Having received the answer that the forecasts are based on information received from the representatives of Russia and Turkey, all Safaryan said that Turkey only for Baku will not interfere in the Karabakh conflict, which would not have existed between them contracts.

Safaryan recalled that during the April events, the Azerbaijani side has not made a single shot on the border with Armenia. “This indicates that Azerbaijan is well aware of the consequences of the aggression against Armenia. Baku is now emphasizing local escalation,” he said, adding that Karabakh is not the middle East and does not have the same value for Turkey as Syria.

“Of course, Turkey is an ally of Azerbaijan, but I don’t think for Baku it will take such a step. Especially when you consider that its relations with Russia normalized. I do not think that Ankara would threaten its strategic interests and be drawn into the conflict”, — concluded the expert.