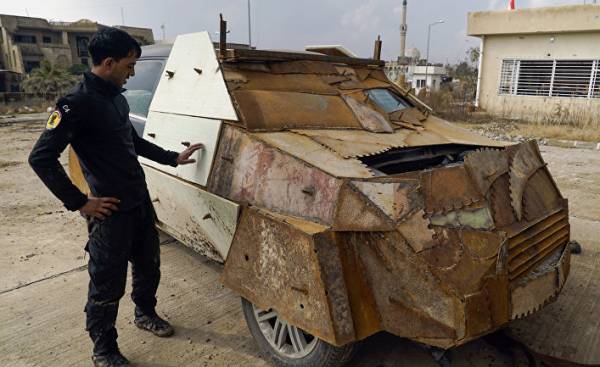 “Islamic state” (banned in Russia — approx. ed.) struggling continues to restore its influence, trying to repel the attacks of the Iraqi forces, followed by ISIS at his heels. Last recently invented a new kind of deadly armored car, transforming the SUV production in the us the weapon that can kill a large number of victims.

New armored demonstrate a very high level of skill that militants of the “Islamic state” captured since the seizure of vast territories in Iraq and Syria in 2014. It is a devastating invention that attracted the attention of a number of military experts, including international ones. Appeared the possibility of a lengthy conflict between the Islamic state and the international coalition, which is struggling with it, and this without taking into account other obstacles to the liberation of the city from ISIS.

The invention militants confirms the existence of minds among the members of the organization, which should not be underestimated. New armored vehicles have been sent to the areas controlled by ISIL in the middle East, in Africa and in some Western countries.

ISIS uses a certain technique, developed by the U.S. military during the invasion of Iraq in 2003. They covered their unarmored car metal plates, made from the remains of the old destroyed vehicles to protect against landmines laid along the roadsides. However, the car used by the militants now improved. They lined welded metal panels with holes for machine guns on top and sides, which distinguishes them from older, similar to scrap cars which can be currently seen throughout the country.

As we know from military history, such funds began to appear during the Second world war. In 1940 the British army had a sufficient number of armored vehicles. Fearing a German invasion, the British had turned the civilian trucks with iron sheets and used them to protect vital installations.

Another example is the confrontation between Libyan and Chadian armies in the late 1970-ies. The latter was better equipped than the army of Chad has added machine guns on nearly 400 civilian trucks, which allowed them to cope with an armored Libyan military equipment.

As for Syria and Iraq, ISIS is not simply improved these vehicles, but turned them into a deadly art. In the ISIS produced hundreds of these armoured vehicles, which are often loaded with explosives and can be used as a bomb for a terrorist attack.