In Berlin there passes a meeting of representatives of the Normandy format on Donbass. In the capital of Germany from the Ukraine flew the head of the OP Andrey Ermak and Minister of the occupied territories Alexey Reznikov. Vladimir Putin will present the Deputy head of his administration Dmitry Kozak. The sides will discuss the implementation of the decisions of the December summit of the Quartet.

In addition, as found by the German media, Moscow is lucky to have this meeting rather stringent conditions on the timing for the special status of Donbass. In the Kremlin until July 6 we are waiting for proposals on making relevant amendments to the Constitution.

However, the Ukrainian authorities had previously refused to change the basic law under the Minsk agreement.

What will the new requirement of the Russian Federation and why it was made now — versed “Country”.

The day of the visit, “Norman” emissaries of the German magazine Spiegel has published excerpts from a working paper by the Russian delegation. The material is called “Moscow conditions.”

It says that Russia until July 6 — that is, three days later — Ukraine expects the draft changes to the Constitution, which concern the special status of Donbass. Settle them pledged Poroshenko signed the Minsk agreement.

However, since then, nothing in this direction was not done. An attempt to fit the special status of the transitional provisions of the basic law in the summer of 2015 passed its first reading only. Then under the Rada clashes and the four guardsmen were killed by a grenade throw.

However, even if I managed to finish the job, the Constitution would have one paragraph about what the status of Donbass is regulated by a separate law. Which Parliament has already adopted in 2014, and frozen until the elections in the territories ORDO.

Such a law can at any time to cancel. Therefore, the representatives of the Russian Federation and republics in the Minsk group said that in the Constitution it is necessary to make a more detailed description of what should be a special status.

It was on such project changes and they say, apparently, in working paper of the delegation headed by Dmitry Kozak. Also there is indicated another condition with the boundary date 6 July: all Kiev and “LDR” lists of prisoners for exchange.

What is the sanction for failure to comply with these conditions is still unclear. That is, while this is not an ultimatum, but clearly persistent demand, in order apparently to reconcile this date with the European partner to supply Ukraine a deadline.

Ukraine and the special status of Donbass

The fact that Kiev has the vision of autonomy ORDO has long been known. Ukraine against the granting of “DNR” and “LNR” any special rights, especially as enshrined in the Constitution. This position is voiced openly by all authorities, past and present.

Another thing is that there is a Minsk process, which Ukraine comes out. The Minsk agreement clearly state that the special status of Donbass should be enshrined in our Constitution — and only after consultation with representatives of individual regions of Donetsk and Lugansk regions.

It is written so clearly that other interpretations are simply not. However, Kiev until now ignored the harmonization of any laws in the Trilateral contact group (this is done in the framework of a special political classes).

The exception was the “formula Steinmeier”, which introduces the special status of Donbass in the first day of elections in the territories ORDO. Ukraine supported the formula in September and pledged to implement it in the law on the special status. What has not happened yet.

One of the stumbling blocks in Kiev called the need to harmonize the Ukrainian legislation with the separatists — although other members of ORDA in Minsk just yet.

To work around this time on Bank after the appointment of Ermak as the head of the OP came up with two ways.

The first was the Advisory Council — an Advisory body under the Tripartite group, which would include representatives of both Ukraine and uncontrolled territories. To create it even agreed in writing — however, after the rallies of nationalists (by the way, a few) under the President’s Office decided not to create.

How justified then Ermak — call the Council planned not separatists, and certain other representatives ORDO, not involved in the conflict with Ukraine. And absolutely Pro-Ukrainian. What I believe is extremely weak: it other side of the Minsk-2 agreed to the establishment of the Council is unlikely to make it “Pro-Ukrainian”.

After the failure of the idea of the Advisory Board followed the second method to formally comply with the requirement of Minsk. The Ukrainian delegation has introduced two primagadanskaya journalists who until 2014 worked in Donetsk, Serhiy Harmash and Denys Kazansky.

Their Kiev-appointed “representatives of Donbass” unilaterally — without asking even the inhabitants of the region. Or at least immigrants.

Arrange them voting labour would not be made, and in this case, Kazan and Garmash was unlikely to have had the chance to get to Minsk. Both are supporters of the “party of war” and more — fierce critics of the Minsk agreements, which seems to now put guard.

But Ermak felt that the formal requirement of Minsk-2 is executed. And at the end of June the head of the Office of the President even stated that “representatives” have already begun to negotiate amendments in the law on the special status of Donbass, where I wanted to insert a “formula Steinmeier”.

Of course, the format of “quietly to himself,” the enthusiasm among the other members of the TAG did not cause. As was already explicit profanity — even on the background of the sabotage that happened earlier.

Moreover, all this occurred against the background of other problems: the exacerbation of the front, of Ukraine’s refusal to agree on new areas for cultivation of troops, prisoners subject to change — all agreed in Paris in December 2019.

That, apparently, and caused the toughening of the positions of Russia and the emergence of the cutoff date, when Ukraine, according to Russia, must move things off dead center.

What will turn the “ultimatum” of the Russian Federation?

July 6, occurs within three days. Even so the term is clearly impossible for Kiev, which delayed disadvantageous processes for years. And hardly three days “roll out” the changes to the Constitution — especially since Zelensky officially disowned them.

The very appearance of such projects on behalf of Ukraine in Minsk, even without intent to take them — will immediately cause a new Maidan nationalists and supporters of Poroshenko. That is, Bankova street will not do.

The conclusion is simple — if Russia puts Ukraine such a short deadline, it is clearly not hopes that Kiev will rush to perform it.

In all likelihood, the Russian side offers this date as a “stove” from which to dance — something is needed to start trading. So, for example, in the dialogue with Ukraine, France and Germany to go to a new deadline, which would podderzhala most participants in the negotiations.

If the Ukraine from the tight schedule to refuse, you expose yourself to the inability of a partner to the Berlin meeting. And I agree — they will assume obligations that subsequently wants to perform. And again, show Europe who violate the Minsk process.

It is hardly an “ultimatum” RF — is the Prolog to exit from the Minsk agreements, which Russia itself and advances. Rather, it is a way to translate the work of the TAG in a more constructive direction. And if it is impossible to show exactly who breaks the peace process. 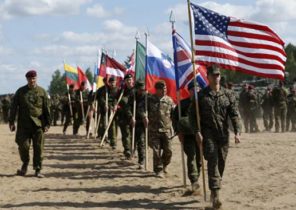