The work of the Finnish researcher, “the Russian revolution and Finland 1917-1920” was published in a beautiful facsimile edition.

In December 1967 Finland celebrated the fiftieth anniversary of independence. Then the holiday came out of a Grand book, which were first analysed the events of the critical period of 1917-1918.

Polvinen considered obtaining Finland’s independence from a different angle, in the context of developments in world politics. At that time in Finland was dominated by narrow national views and overly emphasized the importance of prepared in Germany Rangers for independence of the country.

In fact, the independence of Finland was a sliver in the sea, which played the events of the Russian revolution and the end of the First world war.

Polvinen debunked a myth and a favorite of President Urho Kekkonen (Urho Kekkonen) that Vladimir Lenin recognized Finland as an independent country because he was good and true friend of small Nations.

For Kekkonen’s foreign policy, this study was a real poison. Due to her strong arguments Tuomo Polvinen emerged from collisions with the critically acclaimed the winner.

In the first part of the study Polvinen, published in the fall of 1967, dealt with the period from February 1917 to may 1918, with “the overthrow of the king” to the end of the civil war in Finland.

The next part of the book, which covered the period from the spring of 1918 to the Tartu peace of 1920, was published four years later, in the fall of 1971.

50 years later, in the spring of 2020, since the Tartu peace 100 years passed, and two Grand work of honorary Professor Polvinen out a single facsimile edition.

692 pages of graceful prose, is the result of painstaking research of the archives of many countries in the world, published by the publishing house Docendo.

But whether the main theses became in time the controversial book Tuomo Polvinen to take criticism these days? This topic discuss three professors of political history of all ages.

“Words Polvinen still true, I see no reason to challenge it. He was the first Finnish researchers considered our independence within the period from the end of the First world war to the start of the global struggle for power. In this he was helped by his wonderful knowledge of languages, because he had to dig over the Eastern and Western archives,” answers Professor Emeritus of the University of Helsinki Seppo Hentila (Seppo Hentilä, 72).

“In 1917 and 1918 I put the book Polvinen in line with the study by Risto alapuro was (Risto Alapuro) “the State and revolution in Finland” (Valtio ja vallankumous Suomessa),” adds Gentile.

“Before, we looked at the theme of independence through the keyhole, but Polvinen studied Finland as part of a whole, neither more nor less. This is in contrast to his contemporaries: no one has studied this topic so deeply.”

Kimmo rentol of notes the greater availability of Soviet sources. Earlier in his work Lenin’s government issued a lot of documents.

The extraordinary secrecy of documents went to the Soviet practice much later.

About the period of 1917-1920 in the modern Russian archives failed to find anything radically new or different interpretations Polvinen said Rentol.

“Polvinen established the basis of the full realistic picture.”

“A very credible job. He brought together a large puzzle in which Finland was only one part. Of course, later these views can also be expanded with more current research.”

The most important have already been mentioned above, the interpretation of Finland’s independence. President Urho Kekkonen promoted the view that independence was a gift from Lenin, a demonstration of its good intentions in respect of the right of small Nations to self-determination.

Kekkonen, first expressed this opinion in his speech at the Smolny in the winter of 1959.

Polvinen opposed. The recognition of independence was not a gift, it was on the “Department for accession”, as said Lenin to his surroundings.

So what was it, a gift or a tactical move? And how far can you go on trails unrealized maneuvers of history?

“Lenin openly voiced this idea to his entourage, and of course, we can conclude that soon we would be deprived of the gift if the civil war in Finland ended as something else” — said Vares.

The rentol believes this issue is very complex.

“We can’t know for sure what would happen. Of course, you can argue about the possible probabilities, but with absolute certainty can not speak. In the course of history you cannot change one element and expect that everything else will remain in their places.”

“Tuomo Polvinen as an ethical researcher, according to where he just makes assumptions. As in this case,” says Rentol.

Gentile stops on the key aspect of the book. Polvinen dryly says that Lenin created “a beautiful image of an altruistic, healing the world”, is not tenable, but immediately adds: “those measures which Lenin took as an extra option, turned in the changed historical conditions in the cornerstone of relations between the two countries based on mutual interests.”

Polvinen remained unconvinced as a researcher and at the same time supported the idea of developing relations between countries in the spirit of Kekkonen. This corresponded to the time of publication of the book — 1967.

At the time of the release of the second part in 1971, the situation changed.

In 1970, Finland has undertaken many activities in honor of the centenary of the birth of Lenin, the cult of the leader, the benefactor strengthened.

Urho Kekkonen was irritated by the interpretation of “some historians” about the dual role of Lenin in the question of independence — and the President has said so publicly. 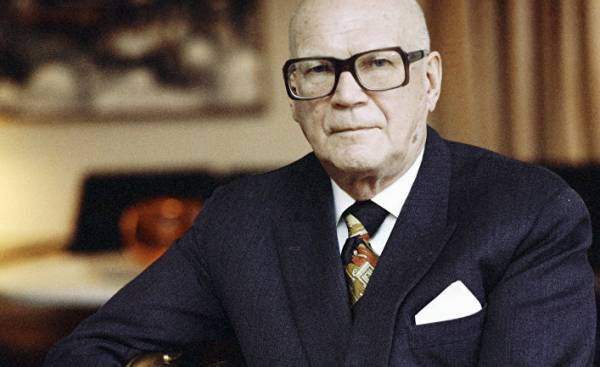 “Although Tuominen and departed from the ideas of communism, he continues to like the ideas of Lenin”, says Rentol.

In public discussions with Polineni Tuominen still failed. His admiration of Lenin stood against the facts in the arguments Polvinen. Six to zero in favor of the study.

The President did not come back to this thread. Polvinen continued the successful path of researcher and Professor.