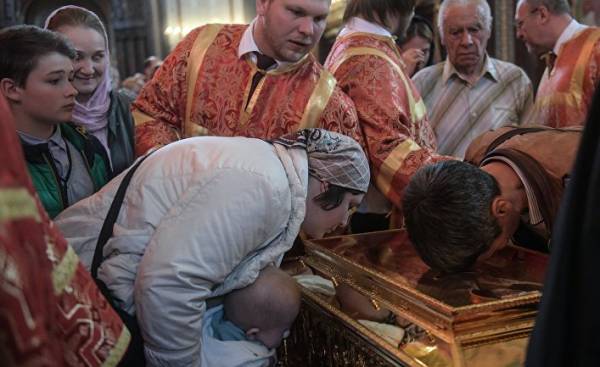 If you look at the book “the Orthodox Church”, in standard English-language introduction written by Metropolitan Kallistos the Ware (Kallistos Ware), you will read the following: “Orthodox believe that the body is cleansed from sin and transformed together with the soul, therefore, they are deeply venerated relics of saints. As Catholics, they believe that the mercy of God present in the saints ‘ bodies during their life, keeps his power in their relics… and God uses power as a channel of divine power and a way of healing.”

We’ve had enough of the doctrine. In the field of social, cultural, and diplomatic realities of the veneration of the relics of the saints recently turned into an incredibly common phenomenon in the two Orthodox countries, Greece and Russia.
Russian stand in queues to venerate the relics of Saint Nicholas, Bishop of the fourth century, who is remembered in Church history as a generous shepherd of his flock, to which the seamen, travellers and vulnerable women had requested protection. Russian believers, including the kings, who bore his name, always had a special interest in this Saint. In Western Europe he became known as Santa Claus. The arrival of the relics on may 21 (from the Italian port city of Bari, which became their long term refuge) was welcomed with full military honors. Church bells rang across Moscow, when the sacred remains were brought into the Church of Christ the Savior.

Meanwhile, the Greeks had stood in long queues to pray at the relics of Saint Helena, exhibited in the Church, located in a modest area of the Big Athens. She was the mother of Constantine, the first Christian ruler of the Eastern Roman Empire. Helen is revered as the founder of Christian archaeology: it is said that during a trip to the Holy land she identified the place where they crucified Jesus Christ, and unearthed the true Cross.

All the famous mascots have many meanings. Prokopis Pavlopoulos, President of Greece, said that the relics serve as a reminder about the fundamental role of Greek Christianity in the development of European civilization. (Can someone interpret this statement as addressed to the Brussels bureaucrats a plea for mercy). For many of Elen, the Empress became almost a family member. For other devout Greeks it turned into the eternal Queen of Greece. In the other corner of the collective unconscious soul of the Greek name “Helena” is reminiscent of the kidnapped Princess who became a heroine of epic poetry long before the beginning of the Christian era: her “beauty that in the way the court inspired” and caused the outbreak of the Trojan war.

Whatever the cause, many Greeks are eager to see the return of Helena to their homeland forever. Themselves the relics are still kept in one of the churches of Venice. The attitude of the Greeks for the return of the relics of Helena and simultaneously deeper and less hostile than the question connected with sculptures from the Parthenon in the British Museum.

And in Russia, and in Greece a temporary stay of the relics turned out to be related to some delicate questions of diplomacy in the Christian world, which in itself is very important. Delivery of the relics of St. Nicholas was made possible by the meeting of Pope Francis and Moscow Patriarch Kirill in Havana last year. Temporary transfer of the relics of Helena tacitly reflects the warm relationship between the “Apostolic mission” or openness of the Greek Church and the Roman Catholic authorities in Venice.

These happy moments in interfaith diplomacy refute some rumors spread in other parts of the Orthodox Christian world. Since last summer in Crete, a meeting of bishops, which was attended by ten of the 14 Autocephalous Orthodox churches in the world, was a fierce debate about in whose favor the Board has made its decision — Catholics or other Christians. Purists argue that the Council committed a grave error, using the word “Church” to non-Orthodox structures. (No, Erasmus did not invent).

Standing in queues, awaiting the opportunity to venerate the Holy fathers and mothers are so revered by their people and in their churches, the believers, the Greeks and the Russians can reflect on that a little common courtesy and common sense in relations between groups of people who call themselves Christians, can give impressive results.