Two days later Jessica for the first time in my life will not be able to pay the rent, and now she’s standing at the gates of the private charity organization “Brotherhood shelter” (Hermandad del Refugio) in the centre of Zaragoza.

In the capital of the Autonomous community of Aragon, located between Barcelona and Madrid, especially in the summer is hot and winter is especially windy. About ten a.m. the sun was hot already with might and main. Before Jessica is already a queue of 18 people with bags on wheels, they put packets of milk, packets of pasta and two pounds of chicken. 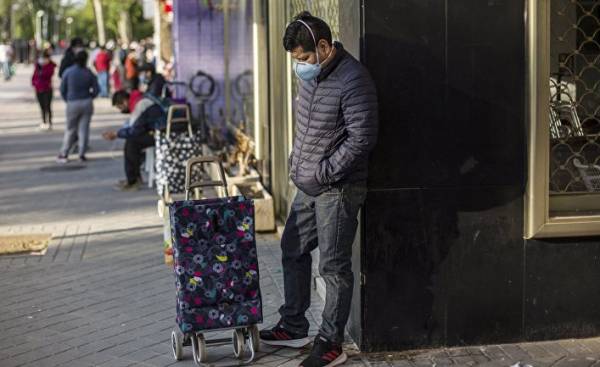 Without the donations from the Catholic volunteers these people barely manage to make ends meet.

Jessica black from the Apple AirPods headphones in my ears and impeccably white Converse sneakers. She was 27 years old, and it’s the first time standing in a queue. “Come in, come in, she tells her man at the door. — But first, you need to disinfect your hands.”

Pandemic coronavirus paralyzed the economy of Spain. When Prime Minister Pedro Sanchez on March 14 announced the quarantine, closed stores, restaurants, concert halls and businesses. The whole social and economic life of the country instantly stopped. For six weeks work lost 760 thousand people, at least temporarily, and despite the fact that in the beginning of the year the number of unemployed and so exceeded 3 million.

Left without a job and Jessica. Strictly speaking, it wasn’t even fired. She’s a singer, and in early March he worked in the orchestra. In fact, it had hired each time in day of a concert. Whatever it was, this money was enough to live on. Part of the salary is 900 euros per month — she received unofficially, in cash. That her services are no longer needed, Jessica announced Wotsap.

In early may, Jessica first asked for humanitarian aid. She doesn’t want to give his name, confessing: “I am very sad that I’m standing here.” Currently, the charity organization in Central Zaragoza provides free food 2271 people — 504 man more than to “lockdown”.

Similar scenes can now be seen throughout Spain. In Madrid and Barcelona and also in some other regions charity organisation of the Catholic Church received 60% more calls from needy citizens in comparison with previous years, says Raul Flores (Raul Flores) from the Foessa Foundation engaged in the study of the social situation for charitable purposes. According to him, “hungry” queue getting longer and longer. This is a clear sign of what awaits the country in the coming months: perhaps the deepest economic crisis after the civil war in 1939. Because of the national GDP, according to the Bank of Spain, in the adverse scenario, could fall to 14%, and unemployment will rise to 21%. In this case, public debt is approaching 130% of GDP.

The birth of the new social rights

“Coronaries” revived in Spain the debate on the introduction of basic income. Because so far the state social assistance in the country. Only after the death of dictator Franco in 1975 here somehow began to develop a welfare state. Families with children receive very little support. Therefore, the introduction of basic income was the main campaign promise of the left party Podemos (“We can!”). Last fall she wrote the program of his coalition agreement with the socialists. Now the government of Sanchez is trying to rapidly bring this project to life, not to give hundreds of thousands of people to fall to the bottom. “This is a historic moment for our democracy — the birth of a new social rights,” solemnly declared the then Deputy Prime Minister, Pablo Iglesias (Iglesias, Pablo).

Spain still fully recovered from the effects of the global financial and economic crisis of 2008. Even before the outbreak of the virus about 20% of the population lived below the poverty line. The labor market is split, only a few have open-ended employment contracts and the right to assistance in case of unemployment. Too many people have to settle for fixed-term employment contracts, which sometimes are literally a couple of days. According to statistics, the Spanish Agency for employment Sepe, looking for work 8.4 million Spaniards.

Until now, social assistance (very limited sizes) pay only the regional government. This assistance, according to Flores, reaches only up to a third of people living below the poverty line (about 75 thousand people). Basic income will receive about 850 thousand households.

However ingreso mínimo vital — in the literal translation of “minimum income for life” — will not be paid unconditionally. This will be financial assistance, something resembling Hartz IV in Germany: the right for it will be people aged 23-65 years, at least a year continuously and legally residing in Spain. Social services will check their financial situation and income. As necessary, the state will pay funds to 462 euros per month single persons and up to 1,015 euros families of five people. For 2.3 million of the Spanish basic income, presumably, will be the only way to overcome the “coronaries”.

The strongest impact of the pandemic noticeable in Madrid. In the capital, one of the richest regions of the country, residents in need of help lined up, for example, on one of the side streets from the Puerta del Sol to Plaza Jacinto Benavente.

Organization Ave Mariá at city hall supplies primarily the homeless. But since March this year, referring here also the waiters, nurses and sellers — all of them lost their jobs. The crisis primarily affected those who worked on short-term contracts or illegally. It’s often foreigners, who found at least some work in the years of economic growth, and now first lost her.

One of them is 30-year-old Mario Ignat (Ignat Mario). Eight years ago, came to Spain from Romania and worked at construction sites. Now it’s all in the past. Only Madrid remained without work 138 thousand people, and about half a million sent on unpaid leave. During the quarantine every week about thousands of companies declared bankruptcy.

Ignat has not yet lived in Spain ten years and therefore cannot apply for citizenship. The money that he has enough for the next payment of rent. He can’t drink with friends beer at the bar or prepare their own food. A basic income will greatly improve his life.

For Mario Ihnat and Jessica a lot depends on when they actually receive the money. From June 15 they can qualify for basic income. Before the end of this month, the first 100 thousand people have hindsight to help, they still relied on 1 June. The government promised to solve this question, and Jessica only hoped that by that time will not be on the street.