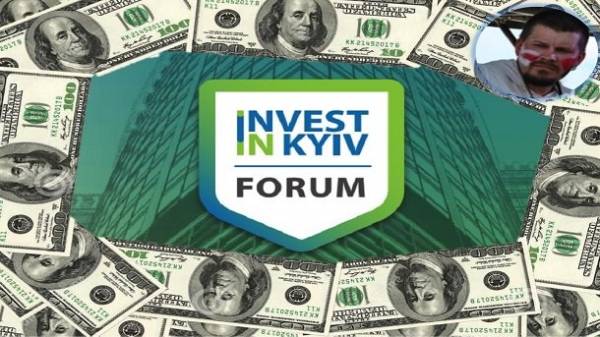 What was discussed and that I tried not to touch it, said the musician Arthur Prosowski.

This year the Cabinet of Ministers of Ukraine declared the year of tourism and Investment forum is mainly dedicated to tourism, establishment of a proper tourism infrastructure, the film industry and the development of cultural projects. Although Prime Minister of Ukraine Volodymyr Groysman in his speech at the opening of the forum did mention about a attractive investment projects of the agrarian sector.

“Visited the forum of foreign guests and speakers urging Ukraine a little more to Express themselves about investment opportunities. In many European countries, particularly Germany, France, and not only in Europe, heard a lot about the Ukrainian issue and have very little idea about the investment possibilities of the Ukrainian European capital”, – shared his impressions of Arthur Prosowski.

“Ukrainian building the amusement Park in Disneyland is certainly an interesting issue discussed in the forum, but most questions from citizens and media regarding the household, not the entertainment areas. Confirmation of the “siege” of the capital mayor Vladimir Klitschko journalists, representatives of public organizations and ordinary residents of the city who came to the forum to hear the answers and solutions to their current problems, and this hampered traffic in the capital, and the Parking area, as well as the demolition of “Khrushchev,” added Prosowski.

According to the Polish Pro-Ukrainian activist, foreign investors are rather interested in the construction of bridges, toll tracks (a good road to Kiev Oh as needed), studios. Kinoindustria, according to Brozovskogo, now brings not only income to Ukraine, but also fame.

“The high popularity of the Ukrainian capital as the site for filming due primarily to the relative cheapness. Abroad shooting of the clip costs about 4-8 thousand dollars, and in Kiev the clip is not the worst quality you can shoot for 1.5–4 thousand dollars. The level of Ukrainian specialists is quite high,” – said the musician.

Landscapes of Kiev, appear in the promotional video Apple Watch, the creation of which was attended by Ukrainian production Studio, Radioaktive Film. They had previously been involved in the creation of the video “Up & Up” for the British pop rock band Coldplay, who also filmed in the Ukrainian capital. By the way, this clip have already seen more than 126 million people.

The Deputy mayor of Kiev Mr. Reznikov said the attractiveness of Ukraine and Kiev for the filmmakers and said that soon Ukraine will begin shooting the film with the participation of French actor Jean Reno (known for the film “Leon”).

In addition, the forum of Ukrainian and foreign investors were presented opportunities for cooperation on the development of historical part of the city – Podol, Khreschatyk and other places.

“In many European countries there are so many cultural heritage sites as there are in Kiev. And the city authorities understand this and try to attract investment to preserve them. Moreover, it was proposed to invest in business tourism, sports and entertainment projects, and projects to develop the capital’s infrastructure,” added Prosowski.

Many questions are devoted to the preservation of the cultural heritage of the capital and the building of the historical part of Kiev. In Kiev still dig up ancient graves and in their place build new buildings.

“New remote from downtown areas actively being built, but the most attractive to investors and developers of the land – closer to the heart of the capital. Kyiv needs an investor, which replaces the old panel “Khrushchev” modern buildings”, – summed up Prosowski.