Experts call relief is insufficient, the doctors support the actions of the authorities

Ukrainians have 60 days living in conditions of quarantine restrictionswhich were imposed by the authorities in connection with the epidemic of the coronavirus. Today, may 11, some of them softened, but according to economists, these little breaks will improve the economic situation in the country and the life of the individual citizen.

The website “Today” to find out what that could be from what was not, and what restrictions remain and when possible, their full or partial cancellation.

Recall that the quarantine was introduced by the Cabinet of Ministers on 12 March in connection with the rapid increase in the incidence of Ukrainians coronavirus. It was expected that the quarantine will be lifted after three weeks, after 2 APR. But he, on the contrary, became more rigid, as cases are increasing, there are more than 15 thousand people.

Doctors claim that potential carriers of the virus, including asymptomatic, many times more than is revealed 15 thousand people. And if you do not observe the quarantine, the epidemic will grow exponentially.

We have codified prohibitions and cancellation which, in the opinion of the authorities was to stop the spread of the epidemic (see infographic).

According to an infectious disease doctor Inna Andronovich, most quarantine measures are justified, but some she calls excessive.

“For example, it is unclear why the men could not walk in the parks and teenagers in the yard without adult supervision, do not understand the prohibition to gather more than two people, perplexed Inna Andronovich. – But the biggest questions arise over the closure of the Department shops and services. If you can ensure the observance of anti-epidemic measures in the grocery store, the supermarket, the pharmacy, why not provide for them in the Department store, a Barber shop and so on. You can not deny the work of private notaries, lawyers, auditors, dentists, subject to the wearing of masks and observance of other precautions. It seems that the government perebdeli and now cancel obviously unnecessary and even harmful bans. Is it healthier to sit in the apartment than go out for a walk in the nearest square or Park?”

As you can see from the infographic, the biggest relief will be concerned with services: resume service, private notaries, auditors, lawyers. Will allow the Department stores. Gradually open food markets. 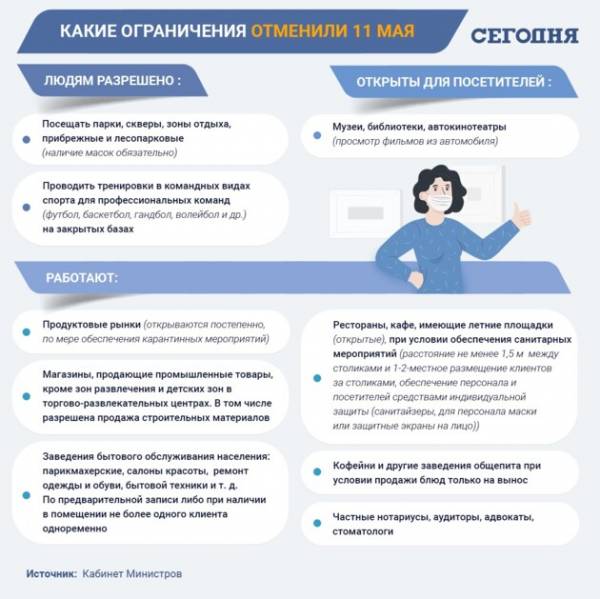 That is, the Ukrainians will be able to cut your hair, repaired clothing and shoes, buy new clothes instead of dilapidated or outmoded. Feel better and small business: you can open the summer terrace of restaurant or cafe to sell ready meals and drinks to take away.

But, in the opinion of the President of the Association of restaurants of Ukraine Olga Nasonova solution for restaurants and cafes to work on the summer grounds will not be effective if not will resume public transport.

“There’s a problem – how to get staff? – asks a rhetorical question of Olga Nasonova. – But the staff can bring, or be forced to ride bicycles. Most importantly – guests without cars to reach? In the Central streets of the flow of pedestrians is not at all. But the entire mass market is built on the flow of pedestrians. And while fully not work metro and other public transport, flood do not see. Many companies will continue to work remotely, and staff will eat at home. As a result, all catering to the mass market after may 11 will be loaded up to 30% if there is a summer Playground, of course. But have to pay rent, yeah, you’ve already earned! The weakening of the quarantine without traffic is a useless scrap of paper. Here you are, work. Pony up and create your own routes. Buses, trams and horse-drawn carriages. Carry their customers themselves.”

Why need to loosen quarantine

Economists say that the weakening of the quarantine dictated by the economy: if we do not lift the restrictions, the consequences can be much worse than the epidemic. So, the President of the Ukrainian analytical center Alexander Okhrimenko endorses the actions of the authorities, which came into force on may 11, but called them insufficient. 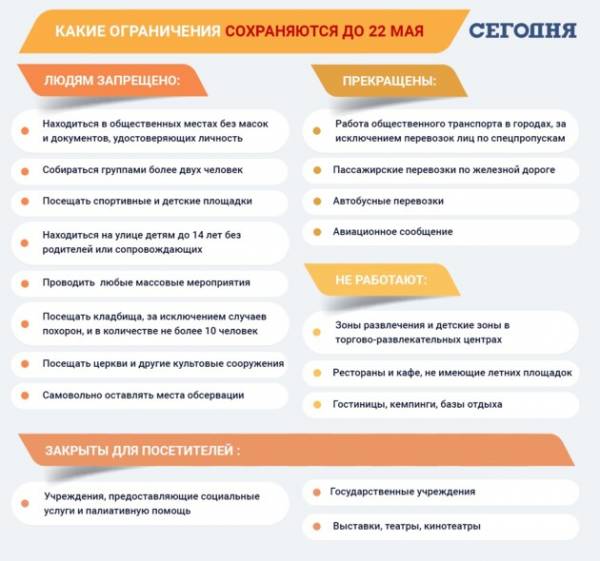 “The Cabinet is not solved the main problem of traffic until fully work public and intercity transportation, any economic recovery will not, – said Alexander Okhrimenko. Even small business will not be able to recover costs for staff to and from work will be not only significant, but also useless. Without transportation, no clients, and an outdoor café or restaurant soon closes again”.

But a member of the Economic discussion club Oleg Pendzin believes that the situation is not so dramatic.

“In fact, no trade of manufactured goods, any work of service in many places did not stop, – says Oleg Pendzin. – I’m not talking about egregious cases of individual elite restaurants in the conditions of the quarantine. But the stores selling manufactured goods, working remotely: the buyer ordered the right product, and he hated it. Illegal served customers many beauty salons, repair company home appliances and so on. So that the Cabinet 11 may largely only legalized spontaneously established order. Real relief can be considered permission to work in the restaurants and cafes, as well as notaries, auditors, lawyers. They do not provided legal services. In addition, you must in the near future to restore the normal operation of the service centers of the Ministry of interior”.

When you begin working transport

The government is not going to soon resume passenger transportation in Ukraine.

Premier Denis Shmigel said: “While we do not see opportunities to open long-distance transport. Public transport will continue to work in those modes in which he worked. The mayor should make the decision to increase the number of transport about changing his work schedule”.

Oleg Pendzin also agree that in the first stage, the rapid normalization of work of city transport, especially metro cities.

“Ground transportation in many large and medium cities goes as before, but with the observance of quarantine measures: in the salons, occupied half the seats, passengers wearing masks, regular disinfection is carried out, – noted Oleg Pendzin. The exception is Kyiv, where people are left alone with the transport problem, the mayor said that “there is nothing to roam”. But on may 11 he will probably have to reconsider my decision.” 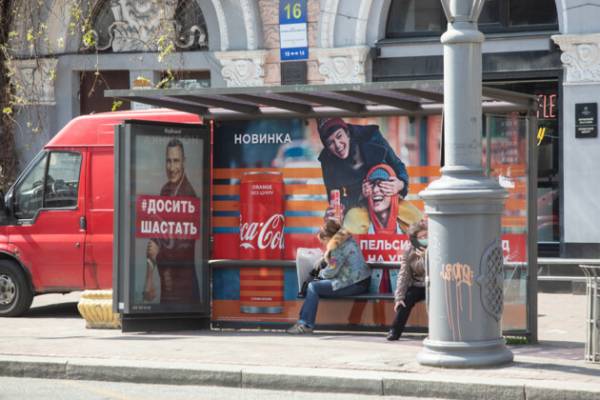 As to complete the work by road, rail and air transport, the experts ‘ forecasts are pessimistic. Oleg Pendzin says it may not be earlier than the epidemic really starts to decline, that is at least a month, and this is the optimistic scenario.

Agree with him and Alexander Okhrimenko:

“Of intercity bus transportation will resume with the second half of June, before the authorities will not dare. The same applies to trains. Perhaps in may will launch commuter trains. With regard to aviation – even in the fall. Although, the more delay, the worse the economy, expect that her fall might be more of than in 2015, when there was a drop of 25%”.

The same forecast in terms gave the Minister of infrastructure Vladislav Crickley, saying that the transport will start to work not earlier than the end of June – beginning of July.

But infectious disease specialists say that the damage from the new outbreak of the epidemic may not be less than that of the economic downturn.

According to the chief sanitary doctor of Ukraine Viktor Lyashko, from the mortality and morbidity of the population is also possible considerable economic losses.

That first it is necessary to wait for the real decline of the epidemic, and only then to allow bus and rail transport, we confirmed infectious disease physician Inna Andronovich.

“It is too great a risk, too difficult to control and identify sick passengers bus or train, so the Ukrainians need to be patient” – sure, Inna Andronovich.

The fate of the early weakening of the quarantine for the Ukrainians is in the hands of the Ukrainians themselves. The more carefully we will observe some simple preventive measures, the faster the epidemic will fade and the sooner the country will return to normal.

In Europe, where the epidemic of the coronavirus began earlier than ours, has already begun the easing or abolition of quarantine measures. As Europeans out of quarantine, see story: