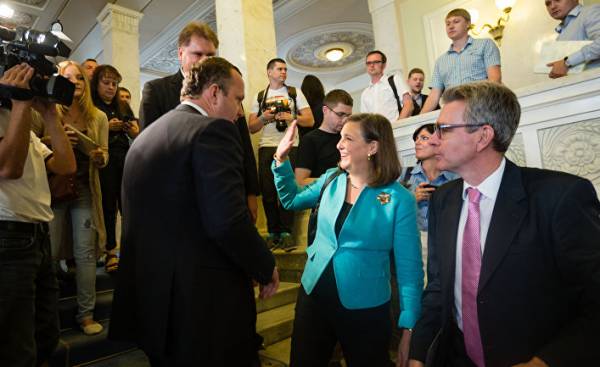 It seems that the ongoing conflict in the Donbass is far from complete. The situation does not develop, neither in the political nor in military terms. This hybrid war launched after the color revolution 2013 — 2014 years, continues, despite a dramatic reduction of hostilities envisaged by the Minsk agreements, signed on 2 February 2015.

NATO, the EU and Canada are major sponsors of this new cold war against Russia. A large number of trainers from member countries of this aggressive organizations are in Ukraine and training the Ukrainian soldiers. Training varied, ranging from the training of snipers and ending with organization of material and technical services, medical staff and so on. This policy of NATO against civilians in the Donbass, under the pretext of the invasion of the Russian army (I have 3 years waiting for evidence of this invasion), it does not serve any other purpose but to create tension in relations with Russia. After a successful coup in February 2014, the American neo-cons made a gift in the form of a new hotbed of tension, this time at the borders of Russia (after Chechnya and Georgia). After the failure of their operation in Chechnya, which involved Islamist Wahhabis and the complete defeat of the Georgian army after the attack on Russian peacekeepers and civilians in 2008, Ukraine became the new Trojan horse of Atlanticism against Russia and the Slavic peoples in General. Because let’s not forget that despite the sometimes justified indignation do not speak the Russian language, Ukrainians are also victims of this deadly invasion of their country.

Over the past few days have seen a boom of visits and applications. July 7, Kurt Volker (Kurt Volker) was appointed special representative in Ukraine.

If we look at CV (curriculum vitae — Latin. description of the life of; resume, biography — approx. ed.), Kurt Volker, we might well doubt his good intentions and willingness to use all his influence to help de-escalate the conflict and significant progress towards restoring real peace in the Donbass. This is a very special representative of none other than the Director of the Institute for international leadership, McCain! Yes, Yes, we are talking about McCain — that hysterical Russophobia!

The McCain Institute is a research center located in Washington, but which has a division in the University of Arizona. The activities of this Institute focus on the development of democracy, human rights — in short, lip service, which is usually used United States under the guise of humanistic and noble motives to justify their interference in the politics of independent countries who resist their social model. It’s always fun to see that we, as a rule, goes about the countries rich in natural resources or located in close proximity to the States, hindering the Anglo-Saxon hegemony. Why this country arrogates to itself the right to interfere in the internal Affairs of independent States? Who gave them the mandate to murder and division within other countries? As far as I know, no one asks their advice, but they think it is possible to give them and it is costly to those who receive them! For those who think that I am exaggerating, I invite you to go to Tripoli, Belgrade, Hanoi, Mogadishu, Baghdad, etc. with the US flag on the shoulder, just to see the joy of recognition of the local population “democratic values” sauce Yankee. Amen… And you will see that there is no military intervention, the color revolutions, the UN resolution against Saudi Arabia, a US ally and major democratic country respectful of the right men and women. Confusing, no doubt…

Returning to the McCain Institute — a cursory glance at the list of “generous donors” to understand the direction and pseudo philanthropy of the lobby at the service of transnational corporations. To begin, you will see a certain number of stamped public associations under the slogan “freedom”. Do not try to find who exactly is funding this kind of social “Association”, just look at their Board of Directors to understand everything. None of the local, solid Americans. Smells like Soros have all these “public organizations”… Bloomberg Chevron (oil), Cisco (computer science), Rothschild Générale électrique Saudi Arabia, Walt-Mart (the world’s number one major retail chains), and the Soros AT&T (the largest Internet operator in America), JP Morgan (one of the 3 largest banks in the U.S.), etc.

In fact, the philanthropists want only happiness in the world for all people. Finally, it is all for those who believe that we live on an island for the kids… Personally, I absolutely do not believe in the selfless generosity of these people. In all States affected by the policy intervention, people die, and the country plundered and fall. And if companies such as Walt-Mart really a little bit concerned about the welfare of the people, they would start with themselves!

There’s nothing worse than Walt-Mart in the US, although McDonald’s and other companies for selling junk food positively characterized in the area of respect for rights and human dignity. But it is obvious that there are still people who believe that uncle Sam and his “values” (stock!) this is the best that humanity has. I want to tell these people one thing only: go to USA, and when you see 70 or 75 year old people working at the Parking lots of these fucking corporations for meager wages, you may finally open your eyes to the “American dream”! Why they work at this age? Because they lost everything during the crisis in 2007 and they do not have enough pension to live on! Welcome to hell! And this hell — your future is in Eastern Europe. Here they live, Kurt Volker. And if the Ukrainians think that representative “values of the Yankees” came with the aim to give them a better life, their awakening from these rosy dreams can become abrupt and rude, to the sound of the chains that their slave owners will put them on my feet. Sunday, July 9, Rex Tillerson(Rex Tillerson) visited Kyiv. As always he was faithful accusatory speeches, which are so fond of in Washington and said that Russia should take the first step to de-escalate the conflict in the Donbass. It is for this kind of false and provocative statements, we, unfortunately, can understand that we are far from a peaceful resolution of the conflict between the population of Donbass and the army of Poroshenko’s regime.

Another dubious character, beyond which stretches a trail of bodies — Jens Stoltenberg (Jen Stoltenberg), the Secretary-General of NATO. July 10, he arrived in Kyiv for the celebration of the 20th anniversary of Ukraine’s cooperation with this criminal organization. Of course, he will meet with Poroshenko and other leaders of the coup junta. Quite strange, but in 2014 I always read and hear that, in the result of a color revolution, President Yanukovych was Pro-Russian. Damn it! So why does he not severed the obligations of the Association with NATO, if he really was a puppet of Moscow? It’s amazing, but the media never asked this question. Considering the statements came from the lips of Stoltenberg at a press conference with Poroshenko, leaving no illusions about NATO’s intentions in the region.

What does it mean and what happens in the discussions between these characters and representatives of the Kiev regime? The last few weeks, from a military point of view, the situation in the Donbas generally calm. Still is the place to be violation of the ceasefire by the Ukrainian army (approximately 30-40 per day). I would not want to shock anyone, but it is little compared to the daily “routine” of Ukrainian artillery, to which we are accustomed. I compare with last summer, when at night it was impossible to sleep due to the incessant bombing and violent. Far be it from me to complain about the situation, but given the recent visits to Kiev, I admit that I’m not optimistic regarding this untrusted silence. We prepare the Poroshenko regime after a visit of these messengers of the United States? From my point of view we very soon find out, but this is unlikely to be an invitation to peace. I’m afraid that to the population of Donbass began to live a peaceful life, you need to attack, so many times predicted but not taken, was finally accomplished, and the army of both young Republics could finish what we started in 2014-2015, namely, the release of Russian-speaking regions of Ukraine from the domination of the coup of the Maidan.