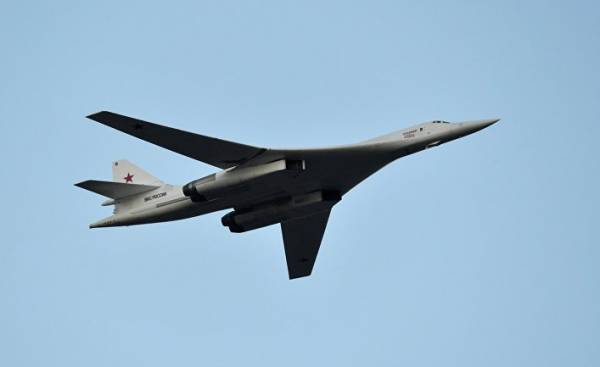 News Agency “Fars”: the Ministry of defence of the Russian Federation on Tuesday, the flights over international waters of the Baltic sea made a total of two strategic bombers the Russian HQs.

The airline also reported a number of international agencies, in particular Reuters, the latter stressed that these bombers capable of delivering nuclear weapons.

After reports of the flight of bombers, a number of Baltic and neighbouring States, in particular Finland, Poland, Denmark and Sweden reported that closely followed the flight of a Russian TU-160, which was originally recorded by the radar. However, the defense Ministry stressed that the flights were ordinary, routine nature, with observance of all norms of international law.

According to the Russian defense Ministry, two bombers, which had armed with 12 cruise missiles as short range, is really able to deliver a nuclear charge, and were in flight over the waters of the Baltic sea for 8 hours. At this time they were accompanied by fighters F-18, F-16 multirole fighter Saab of the air forces of Denmark, Poland, Finland and Sweden.

However, the Russian defense Ministry also added that at the same time, two Russian bomber, but the TU-22 M, was flying over the Norwegian sea and served the mission there for 4 hours.

Over the past few days some media have also reported that Russian fighter jets for surveillance flights over were at the same time, in the waters of the Baltic American destroyer, watching him move in the waters.

The incident took place a few days ago, when the F-16 air forces of Belgium was on duty in the Baltic sea area and accompanied by Russian fighters who were watching the movement of a destroyer of naval forces of the USA near the coast of Lithuania.

NATO published shots of Russian fighters and the accompanying fighter jet of the Belgian air force and explained that the presence of the American destroyer “USS Donald Cook” “should not disturb” the Russian VKS, as the destroyer was in international waters, and its task was “the security of the region.”

Baltika recently often appears in the news in connection with various “incidents” and the movements of ships or aircraft of Russia and NATO, which now almost always is a cause for concern either the Russian side or the Baltic region.

Russia, after the deterioration of relations with Western States in connection with the entry of the Crimean Peninsula to Russia in 2014, concerned about the security of its Western borders and nearby States, especially the Baltic, constantly afraid of aggression from Russia and the probable new actions with her hand on the “annexation” of the territory of neighboring States.

Also last week the command of the North American defense forces reported that two aircraft of the Russian HQs, this time anti-submarine IL-38, was spotted over the airspace of Alaska. The command explained that the observation of the flight of Russian patrol aircraft had to levitate the F-22 fighter and reconnaissance aircraft AWACS (AWACS). Note that the Alaska Peninsula, and the area of the Arctic ocean, also in recent years it has become another area of tension and permanent “incident” between the Russian aerospace forces and the air forces of the USA.