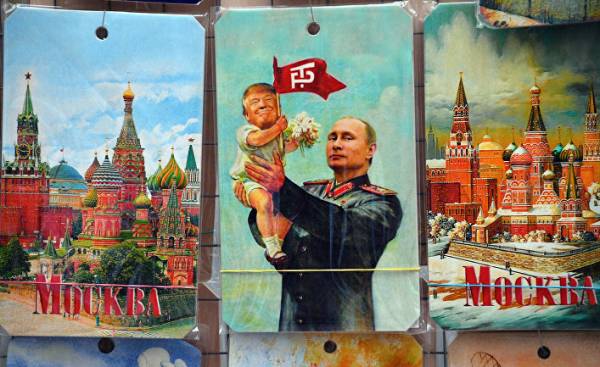 New York — Residents of new York, not so easily distracted from their solipsisms love for “the greatest city in the world.” You want a hurricane, terrorist attack, or — at least — the intervention of hostile foreign powers in their beloved electoral system in order to force them to look beyond the shores of their own island.

For the first time in two decades my visits belonging to the Russian speaking world friends in Manhattan, Russia occupies a dominant place in the conversation at the dinner table. People are desperately trying to understand what, in fact, what Putin wants and what he expects from the presidency of Donald trump. If he wants the United States withdrew from Syria? He hopes that trump would split NATO? What is his position on the question of the Paris agreement on climate?

New Yorkers today, they, like the people of Kiev believe that Putin is behind all their problems — believe in the idea that the Russian influenced the outcome of elections in favor of trump and now the American President in debt to the wily Kremlin leader. And his actions over the next four years will be only a manifestation of the Supreme will of Putin.

On the cover of the March issue of the New Yorker magazine depicted elegantly dressed Putin, who coolly examines through a magnifying glass agitated trump in the form of a butterfly, is today the dominant mood of the people of new York about Russia.

Stroll through the located at the height of the High Line Park near Chelsea market is not currently used above-ground railway line, turned into a great Park for walking, and you will see in the window of a neighboring house picture trump’s embracing of Putin with a naked torso. Moving on to the gilded trump Tower in Midtown Manhattan, where street vendors will offer you badges with a picture of trump and Putin, kissing passionately, and below inscription: “let’s Do fascism once again great”. And one of the protesters unfurled a banner, which shows Putin holding a trump in the form of a baby.

“Today, we are the United States of Russia”, — he shouts, and some passers-by applaud and begin chanting his slogans.

Anti-Putin hysteria in new York makes you think about the Ukrainians crying “Putin ***” (the f word — approx. ed.) during football matches or political demonstrations in the capital, Kiev. These two cities, so distant from each other in temperament, and from the point of view of geography, common today, the fear of Russia and hatred for her.

While Ukraine, leading indirectly to war with Russia in the East, has a good reason to hate Putin, engulfed by paranoia than the residents of new York city, the manifestations of these phenomena are similar in these two cities.

I was nearly hit in the black list during lunch with a friend, when I accidentally told about my admiration for how skillfully Putin uses the West. And in Kiev the same thing: any signs of sympathy towards Russia is immediately perceived as a “betrayal”.

New Yorkers, Ukrainians, turned to the Russian habit of blaming everything bad that is in their lives. Ukrainians accuse Russia of systematic power outages and sporadic violence. Unusually cold spring they explain cold wind blowing in a southern direction from Moscow.

Today the Internet is full of meme mocking is characteristic of the supporters of the American Democratic party tends to blame the Russians — one of them is a dark dog staring at his master, and the signature is this: “This Russian pooped in the hallway.”

New Yorkers today eagerly watching Putin. His exclusive interview with the TV channel NBC Megyn Kelly (Megyn Kelly) or Oliver stone (Oliver Stone) are shown in Prime-time television. New Yorkers, like the people of Kiev, closely watching his words, hoping to get some access to the Machiavellian mind of this tyrant, who, perhaps, pulling the strings and presses on a secret spring in Washington.

The number of monitoring the actions of the Kremlin has never been so large, neither in Kiev, nor in new York. In the underground room poker game in new York, the establishment’s Manager jokingly said that I will be able to access only the case that will give some “secrets of Putin”, and the bar in the center of Manhattan women ask to teach them a few phrases in Russian. In Kiev, people want to know conclude whether trump a deal with Putin, thereby pushing them under the bus. In both cities, the speculation about Putin’s intentions become the subject of heated debate, continuing well after midnight.

After the adoption of the portions of drink some new Yorkers (mostly supporters of the Republicans) admit that admire Putin’s leadership, and sometimes his genius because he was able to turn Russia into a force that need be reckoned with on the international stage.

But, despite its organic hatred of the Russian leader, some Kiev sometimes praise Putin and call him a “strong leader”, contrasting it with his own weak-willed politicians. According to some reports, Ukrainian President Petro Poroshenko’s popularity rating is approaching 20%, is still less popular in his own country than Putin.

However, there is a significant difference between new York and Kiev. To deal with Russian aggression and to protect yourself from the weaponized “fake news”, the Ukrainians have banned Russian TV channels and Internet sites. Russian artists are no longer welcome in Ukraine. The Ukrainian government even banned the entry of Russian participant of the song contest “Eurovision”, held this year in Kiev. Ukraine, in fact, cut off from his large and aggressive neighbor to the North, and wishing to visit this country, as a rule, are biased to control the border.

Meanwhile, new York today has a significant Russian population — it is said that more than half a million Russians live in the five boroughs of new York. Manhattan is full of Russian restaurants and bars, and coming on a tour of the Russian group have a full house of spectators. The truck that sells Russian dumplings in the West village, lined up in long queues. Despite all the suspicions about the Russian intervention, new Yorkers have not yet configured anti-Russian. However, things are changing rapidly in the age of trump. If the United States becomes a party to a direct conflict with Moscow, then Washington may well go to Kiev for advice on how to protect themselves from destabilizing Russian influence.

Vijay Maheshwari is a writer and entrepreneur; he lives and works in Kiev. Maheshwari spent six years in Moscow in 1990-e years and was the chief editor of the Russian edition of Playboy magazine.