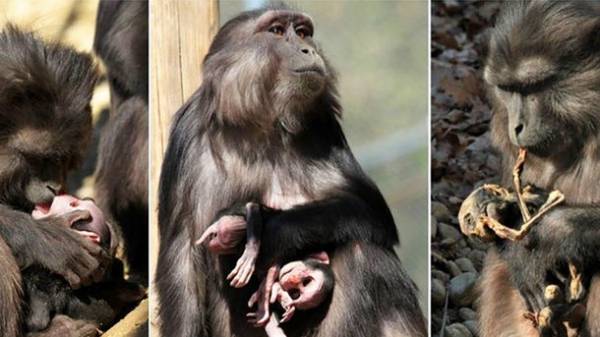 The female macaque Texcoco two weeks carried with him the mummified corpse of her baby, and then ate it. This is the first spotted by researchers case of cannibalism in this species. This behavior can be seen as a normal, though rare feature of the behavior of monkeys, according to the primatologia. This case the researchers described in the journal Primates.

It is known that female primates sometimes some time are dead cubs with them. The reason for this is unknown – they may not have the strength to part with the baby, and maybe I just don’t understand that he’s dead. However, the case when the female Texcoco monkey is eating its mummified baby, was recorded for the first time.

The APE Malin gave birth to a cub at the reserve Abatino in Italy. When the baby was only four days, he died. The next two days, the female seemed inconsolable, and then she looked at her reflection in the plastic door guards and shouted at him.

She then shifted her focus to the corpse of a baby. Evalin he carried it and took care of him, paying special attention to the head and face.

“After the gradual drying out during the first week the corpse completely mummified on the eighth day, the researchers write. In the second week of Evalin continued to carry the corpse with him and care for him, though by that moment with the skull peeled the skin and flesh. She put the corpse in one hand or in his mouth, and hurried to pick it up, if he fell”.

The other macaques didn’t pay Evalin special attention and not trying to do something with the corpse. On the 19th day explorers first saw her eating little bits of the corpse, and on the 22nd day the remains of a baby broke into pieces, but Evalin always wore a piece of corpse in your mouth or hand. To the 25th day, she gnawed him to the bone.