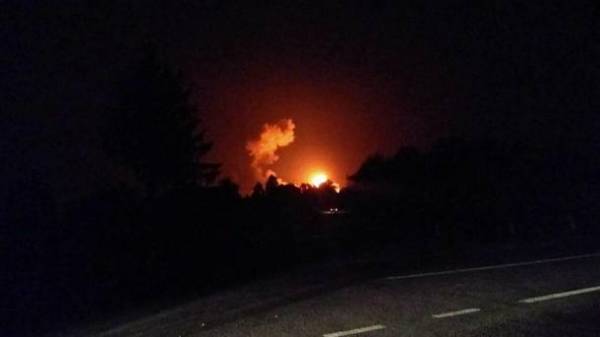 In Kalynivka 20 kilometers from Vinnitsa explosions occur in warehouses with ammunition and weapons. Local residents are on the road in the direction of the explosions. Now blocked the Kiev highway near Vinnitsa.

“It was established that burning military warehouses with ammunition. The decision of Ukraerocentre closed airspace in a radius of 50 km from the zone of fire, from the surface to unlimited altitude,” – said Deputy Minister of infrastructure, Yuriy Lavrenyuk.

It is reported that the traffic is closed in the doubles and the odd direction of a stage Sosenko – Kalinovka days-3 Zhmerynka. The question of sending a fire train JSC “UZ” and the demining group to the place of emergency.

“Separately, set up operational headquarters of JSC “UZ” and, if necessary, a ready passenger trains for the evacuation of the population from places of emergency,” – said Lavrenyuk.

According to the Ministry of internal Affairs of Ukraine, about 22:00 in the divisions of DSNS received information about the explosions of ammunition in military warehouses of the Ministry of defense of Ukraine, located near the village of Kalinovka of Vinnytsia region. To extinguish the fire from a military unit involved 2 fire tank. The scene is directed divisions of gschs. At the scene formed a detachment.

It adds the Ministry of defense of Ukraine, is now taking all measures to contain the fire, firefighters tanks, fire brigades the military and the State service for emergency situations.

“The place left a group of officers of the Ministry of defence and the General staff of the armed forces of Ukraine headed by chief of the General staff army General of Ukraine Viktor Muzhenko. Created the operational headquarters for the localization of the fire, to the scene shrink reserves”, – said the Agency.

Earlier it was reported that according to “Radio Liberty”, the fire occurred in 48 the Arsenal of military unit А1119, there are exploding artillery depots. The explosions started at about 21:00. Locals added that the city turned off the light.

The local military said that the smoke may be toxic.

Meanwhile, earlier it was reported that in the Vinnitsa region will be conducted anti-terrorist exercises.