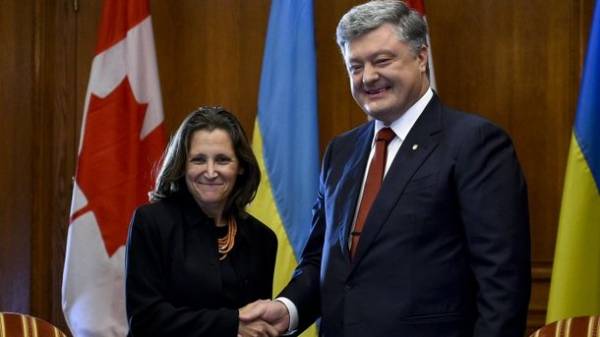 The President of Ukraine Petro Poroshenko expects that Canada will take a principled stand on the issue of sanctions pressure on Moscow, particularly in the context of the forthcoming presidency of the G7. This was at the end of the meeting the Head of state, Minister of foreign Affairs of Canada Christ Freeland press service of the AP.

“It was the expectation that Canada will take a principled stand on the issue of sanctions pressure on Moscow, especially in the context of the future chairmanship of the group of seven”, – stated in the message.

The parties discussed possible ways of mutually beneficial opportunities provided by a free trade Agreement, as well as further deepening of bilateral cooperation in the defense sector, including Ukraine’s support in the development of close partnership relations with NATO.

The head of state particularly noted the support of Canada the implementation of reforms in Ukraine. In particular, Petro Poroshenko thanked the Christ Freeland for his personal participation in the London conference on reforms in Ukraine in July this year, during which it was announced new canadian support projects.

We will remind, Ukraine and Canada can enhance cooperation in the field of security and defense.