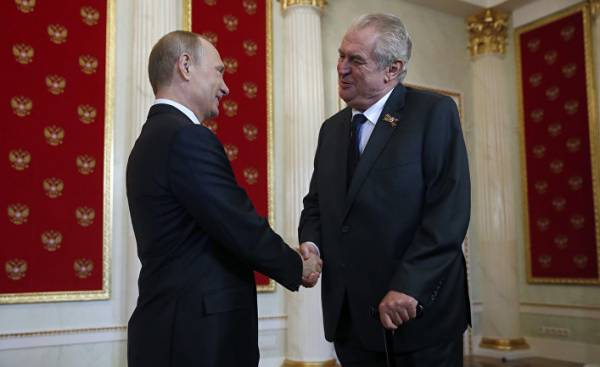 The Russian economy gradually recovered from the fall. It promotes growth of import of Western products in those industries which are not affected by sanctions. However, as it turns out, are imported and even the products that are on the sanctions list.

“In some areas Russia is very dependent on imports. Traditional example — machines: Russia will inevitably have to import them from abroad, because she needs this equipment. So that raises the question of whether countries in fact adhere to the sanctions regime,” — said in an interview HlídacíPes.org Martin Bashta, economic counselor of the Embassy of Czech Republic in Moscow.

When importing “just have”

HlídacíPes.org: European Union from time to time extend sanctions against Russia. How does it affect the economy and the activities of the Czech
companies?

Martin Bashta: Now on the issue of sanctions to maintain the status quo. The Czech Republic belongs to those countries that observe sanctions regime, and the Czech company try as much as possible to adapt to this situation. Not all companies can afford to open in Russia own manufacture. It is mainly those firms which have been working in Russia, say 15 — 20 years. It is they who make the decision to invest in their own production in Russia. And it is now in the Russian conditions is a huge advantage over your competitors.

Is the so — called localization.

— Localization or import substitution. The main change that occurred in Russia over the past three years is the tightening of the official policy.

— The authorities are putting pressure on companies to those able to produce their goods in Russia?

Unfortunately, there are segments that have been closed for direct Czech exports. Case in point — delivery vehicles. About 50 Russian cities still driving the old Czech trams, however, to put today a new (or even worn) trams too. It is theoretically possible in the case of opening a joint venture in which the Russian share has reached 51%. Need to the product or service was the Russian.

— All this applies to import directly, but is it possible to circumvent sanctions through third countries, for example Belarus?

— Not at all. The volume and delivery within the framework of cooperation with Russia are much greater than volumes and deliveries to other countries of the former USSR. Thus, one who is interested in the Russian market should think seriously about the production directly in Russia. It is a hard decision associated with serious risks. Perhaps in the long term it will bring large profits, but they will not be exact in the next few years. Representatives of most Czech companies say that entering the Russian market, hoping for a payback in five years or more.

— You said that the Czech Republic belongs to those countries that observe sanctions. But some European countries are not so fundamental, as several times said representatives of the Ministry of foreign Affairs of the Czech Republic. For example, in the Crimea were the products of some Western engineering companies, although this should not have happened… So how are things going with compliance?

— This is a complex issue. In some industries, Russia is very dependent on imports. Traditional example — machines. Russia has long been one of the leading importers of machines and one of the main customers of this product. While Russia has no own production machines. That is, if Russia needs high-quality machines, it will inevitably have to import them from abroad. However, the machines can be considered a dual-purpose… So that raises the question of whether countries in fact adhere to the sanctions regime. Russia is in a situation when you just have to import this product. Independently Russians are unlikely to develop a new machine. So there are loopholes beyond the sanctions restrictions. However, it is not known whether in General producers from countries not observing the sanctions regime, for example from China, to put this kind of equipment.

But Czech exports to Russia in recent years has increased in tens times. What is the explanation?

— Our exports are approximately 20% higher than last year, while total turnover grew by 35%. About the same indicators of other countries of the European Union. The main reason is that Russia is gradually improving the economic situation, and thanks to the strengthening exchange rate of the ruble, the Russian economy comes out of recession.

A plane full of businessmen

— Do you feel yourself some kind of diplomatic pressure from Russia regarding the upgrade diplomatic and trade relations?

— In the economic field the relationship as a whole has never been interrupted, even in the current period of sanctions. We comply with the sanctions regime, and in recent years have significantly reduced the number of negotiations with Russia at the highest level, however, we continue to support cooperation within the framework of what is permitted.

— Scheduled for the autumn of the Zeman’s visit to Russia. The presidential administration has continuously reiterated that sanctions against Russia should be cancelled… How will this affect Czech-Russian business?

— In Russia, Milos Zeman are very positive. And this, of course, helps Czech companies at least in the sphere of economic and trade cooperation. I expect that in the fall the President will be accompanied by a large delegation of entrepreneurs.

— That is the issue of sanctions, Russia is indeed a different approach to different EU countries?

— This is more a political topic, but I think that Russia is trying in different ways to interact with different member countries of the European Union, and they know it. With different countries, Russia supports the cooperation of different levels and pursuing different interests. The main partner for Russia has been and will be Germany. It is the main consumer of Russian energy and at the same time a key supplier of technologies and advanced equipment, which needs Russia.

— Can we say that Russia has got used to sanctions? They last a few years, and it seems unlikely that in the near future they took off…

— This all goes. In the field of Russian economic policy has undertaken certain measures that complicate the activities of foreign entities on the Russian market. But, fortunately, including our companies, the Russian authorities did not actually have sufficient funds to implement this policy in practice. This, in turn, on certain grants and subsidies from the state budget to the Russian enterprises. But before the end of 2016, the situation with the Russian budget was intense.