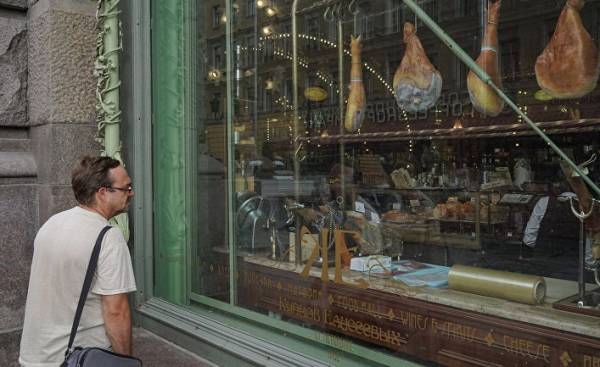 In April consumer spending of Russian households fell to the lowest level for that month over the past five years, according to the results of another monitoring research holding “ROMIR”. Moreover, the reduction has affected all groups — low income and high. Private consumption growth in the country, which started in January — March, for the first time since the summer of 2014, can now be replaced with its new recession.

To March the expenses of Russians decreased by 6.5%, to the level of April last year — 4.9%. Monitoring research holding “ROMIR” is based on data on the consumption of 11 thousand families living in 180 cities with population over 100 thousand people. Monitoring participants scan the barcodes of their purchased goods, and information in online mode is supplied to the common database research.

In April traditionally, there has been some decline in consumer spending, experts say ROMIR — holiday months have passed, and April usually have a Great Post. However, this decline, as this time, there was not even a crisis in April 2015. In the end the real, that is, adjusted for inflation, the cost of Russian consumers were the lowest for the last five years.

Eventually get these from nowhere taking “income” which is recorded in the “hidden” paycheck
Judging by the fact that the size of the “average” check one trip to the store during the month almost unchanged (524 528 rubles instead of rubles in March), it is possible to say that the Russians went back to economy mode, just less conveniently located stores, the authors conclude.

But, remember, for the first quarter of the total private demand in the country for the first time since the summer of 2014, grew by 1.4% compared to the 4th quarter of 2016. Since the beginning of the crisis, this demand has steadily decreased, and in the end of January this year it accumulated a decline of 12%, noted in another review, the research Institute “development Center” Higher school of Economics in Moscow. We’re talking with one of the authors — a leading expert of the Institute Nikolai Kondrashov.

It turns out, barely outlined in the first three months of the year the growth of consumer demand in the country is now again turned into its decline? In part because, apparently, that the “effect” of influence on this demand one-time payment to retirees in January (5 thousand rubles) is now exhausted?

Yeah, that effect is now disappearing. In March, the dynamics of retail trade turnover in Russia has deteriorated again. In April, if the evaluation of “ROMIR” is confirmed by the statistics of Rosstat, it is likely that private consumption will fall below the level of March.

— According to the calculations of your Institute, the real average salary in Russia (taking into account inflation, and seasonality) today remains at about December 2014 — January 2015. That is about 5% lower than it was in “pre-crisis” 2013. Moreover, in recent months to accelerate its growth quite “helped” dramatically slowed the country’s inflation, which in real income and is taken into account. But now, when the rise in consumer prices in the country has slowed to a minimum in the modern history of Russia, this factor will have real wage growth far less “support”. According to your predictions, real wages in Russia will by the end of 2017 to at least get back to pre-crisis levels? Or — not a fact?

— I think not. Rather, the level of average wages only once to “catch up” to the level of 2013. For example, the current gap will be reduced by half by the end of the year, it’s possible. But what we will come to the level of wages 2013 — no, this is unlikely. Moreover, even the predictions that these salaries will continue to rise for 2017, is quite a “bold” assumption. Yes, slowing inflation, of course, contributed to the increase in real wages, but not so much — first of all, their growth was still determined by the dynamics of nominal wages. Again, by the end of December we still did not reach the level of 2013 on real wages in the country.

— Interest rates on the consumer credits in Russia are gradually declining, and the volume of this lending started to grow again after the deep recession of the past two years. Although about half of the new private borrowers, according to credit Bureau use a significant portion of new loans or payments under the old, or just for their refinancing, as interest rates have fallen significantly. But in General, the factor of growth of consumer credit is already having an impact on private consumption in the country, as it was 3-4 years ago? Or until rather no than Yes?

— The fact that over the past two months consumer lending has shifted from contraction to modest expansion, of course, a little will help to increase consumer activity, but no more. The case in a “redistribution” of the money on interest payments on loans, what you are saying, and that, in principle, increase the interest payments on them for the future. The growth of real incomes will affect private consumption in the country much more than the expansion of consumer credit.

— In the next review of the “center of development” noted that “official” salary of Russians, according to Rosstat, is only about one-third of total incomes. What do you mean?

— The fact that Rosstat estimates the full salary, that is “white” and “hidden” on the basis of the pattern of expenditures, not revenues. It’s easier for data on costs much more transparent and reliable. And on them already to calculate the “gray” income. So, there is the “official” income of employees, which accountable for businesses that is the “official” salary, and it is about one-third of all personal income, Rosstat said on its methodology. Whereas “grey” the salary is calculated only on the basis of balance method — sum up all expenses and all known incomes. Eventually get these from nowhere taking “income”, which written in the “hidden” salary.

— If to judge according to Rosstat estimates, it is the “official” salary, and demonstrates growth in recent months…

Based on the information, Rosstat publishes its operational collections, labor cost is two-thirds of all incomes. But these two-thirds include both “gray” component. Moreover, we poorly represent the real change, because this is all very “indirectly” assessed. However, the “official” salary, i.e. on the financial statements, in recent months is really a very rapidly growing. This “official” salary is only over one third of the total income of the population — counting the methodology of Rosstat. For example, in 2015, it amounted to about 20 trillion rubles of the total income of the population of 48 trillion rubles, — says Nikolai Kondrashov…