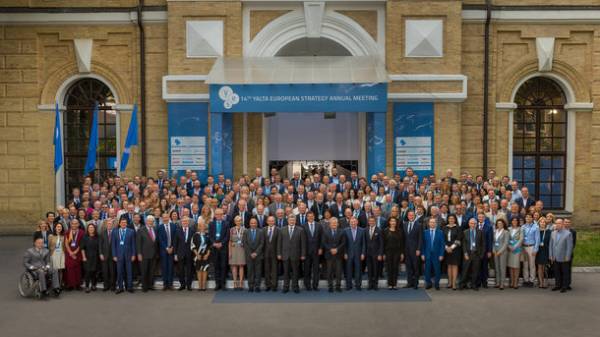 The capital hosted the 14th conference “Yalta economic strategy” (YES). More than 350 politicians, economists, philosophers, and artists from around the world gathered in Kiev to discuss the state of the economy of Ukraine to assess its success in implementing reforms. After ten years in the Crimea and the subsequent annexation of the Peninsula Russia YES for the fourth time going in Kiev. But its members believe in a return to the Ukrainian Crimea. The founder of the forum businessman and philanthropist Victor Pinchuk stated: “Ukraine must not lose faith in the restoration of the territorial integrity and must look for pragmatic ways to achieve this goal.”

Day 1: coloring and food from the counter

The fuss around the Bessarabsky market, which was the first location of the 14-th Yalta conference YES, began long before the ceremonial start. For the registration of hundreds of participants it took a few hours and the Victor Pinchuk Foundation, which organized the event, invited the visitors appreciate the exhibition Fragile state. The fragility condition or state (of the state translated as “state” or “state”) conveyed through the artists suspended from the ceiling on strings of the wreckage of the chair, a glass skull and melting man out of wax. His political analyst Volodymyr Fesenko dubbed a symbol of Ukrainian politics.

The conference opened about eight in the evening — under the dome of the Bessarabian market, which at the time of the event turned into a buffet hall. Maneuvering between the trading stalls, the guests argued that it is unlikely that “Besarabka” in all the years of its existence, seen so many from the political elite — Ministers, MPs, ambassadors and scientists. All with the pleasure enjoyed snacks directly from the shelves. The location was chosen specifically: the organizers wanted to showcase the flavor of Kiev, and to show its cultural, agricultural and urban potential. “Even in Soviet times this place was the embodiment of freedom and the market economy. A small proportion of capitalism in the vast ocean of communism”, — said the scene was one of the organizers of the YES-2017, ex-President of Poland Aleksander Kwasniewski.

On Friday, the conference moved under the arches “Mystetskyi Arsenal”. Workflow from the start took the bar high, starting with the speech of the President of Ukraine Petro Poroshenko. “Our historical place in the family of United Europe and the transatlantic Western Alliance, — said from the rostrum of the head of state. — Our mission is to become the Eastern border of European civilization, the guarantor of European and world security, engine continental economy.” The President also spoke about the anti-corruption achievements of the country — the launch of the system of electronic declarations, the establishment of a National anti-corruption Bureau and the Specialized Prosecutor’s office.

After the discussion, Poroshenko and the head of the Council on foreign relations Richard Haas, the participants went through the corridors of the Arsenal, where she spoke with reporters and addressed the exhibited installations. The Central art object, which is photographed almost every member of “Yalta” was “Moses” — a few dozen hanging from the ceiling of tools: hammers, planes, pliers, and even forks. At the same time on the screens broadcast a performance by Spanish artist Santiago Sierra “25 000 000” — some women live for two days counted stacked 500-hryvnia banknotes.

During the ten sessions of Friday was attended by the Minister of foreign Affairs of Sweden Carl Bildt, head of the EBRD Suma Chakrabarti, former U.S. Secretary of state John Kerry and former Prime Ministers of great Britain David Cameron and Tony Blair. However, not only politicians talked about the trends of the modern world and Ukraine. Thus, in the framework of the discussion “if this New world? Three views” of his vision told French philosopher Bernard-Henri levy, investigating the way to Europe Turkey and Ukraine. In addition, Nobel laureate 2008, economist Paul Krugman spoke with the audience about the cause of the current crises. “Someone will say that the world is now faced with the fact that the rules have stopped working. But it’s not. We survived the crisis that resembles what we’ve seen in the 30-ies in the United States and Europe. But I would say that now is the Golden time for economic historians. Because they can tell you exactly what has happened and how a similar deal today.”

The session was completed, the Serbian artist Marina Abramovic, known as the “grandmother of performance”. Abramovich told about his creative path and noticed that at the conference she is the only representative of art, among politicians and economists. She also admitted that waiting for proposals from Kyiv — in our country it has never held performances, and the very Kiev the capital was called “the city with a special energy”

Day 3: Kuchma believes in the States

The final day of the Yalta conference was opened by Prime Minister Vladimir Groisman. He told the audience about the medium-term plan, which was approved by the Ukrainian government, and plans for the near future. “Now we can start the implementation of the reform of the pension system — just recently, the Ukraine may see the creation of a new pension system that will provide including macroeconomic stabilization. We are also close to the beginning of the creation of a new system of health,” he said.

Thus the question of the presenter of BBC Stephen Sackur, the moderator of the session, what to do with Mikheil Saakashvili, the Prime Minister admitted that he did not know, and tore the applause. “I know how to build roads and hospitals, to raise wages. And what to do in this matter — I do not know”, — he added.

In addition, on Saturday spoke from the podium the head of the Ukrainian foreign Minister Pavlo Klimkin, Minister of Finance Oleksandr danylyuk and the US special envoy on Ukraine Kurt Volker. Last discussed aggression in the East of Ukraine the second President of Ukraine Leonid Kuchma. “I think each participant had something in mind — the way he sees now and tomorrow, what to do in the first place. But the signals that have been made here, and to reach those people who are engaged in the performance of all. To power — both Ukrainian, European and American. You see, the Ukrainian authorities were present in full strength is a good thing, because she understands the value of this forum, said, “Today,” Leonid Kuchma. — I really liked the performance of Volcker. Sounded confident that the United States in this situation will not stand in the way.”