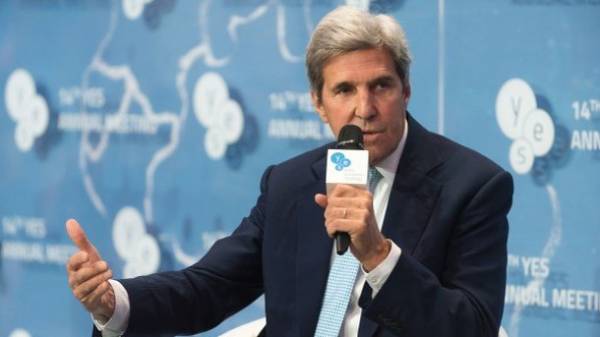 In the framework of the project “Public lectures” organized with the support of the Victor Pinchuk Foundation during the forum YES-2017, in Kiev students came John Kerry, the 68th Secretary of state of the United States. The politician told about extremism, Russia annexed the Crimea and global problems of the world. The website “Today” has produced the main points of the lecture former US Secretary of state.

Trends the new world and independence

John Kerry repeatedly stated that he supports Ukraine and admires its inhabitants.

“A special day was independence. I won’t describe it to you, you were here, you live here. This was very important,” said Kerry and added that the Ukrainians were impressed by his strength.

Now in a world of growing anger, populism and demagoguery, the politician said. According to Kerry, it is quite justified, because politicians can’t give their citizens what they need. For example, despite the victory of the Maidan, people still care about the key issues of the transparency and accountability of government, the disappearance of corruption.

According to Kerry, the modern world is changing very fast, he doesn’t look like the twentieth century, which was dominated by bipolarity. Now there are many non-state actors that influence global processes.

See also: American General on the YES forum talked about a “new kind of war” in Ukraine

Extremism and problems with the education

“We have a world with two billion young people under 15 years and less. There are lots of countries, my friends, is where 70% of the population is about 30 years. At least 300 million of them have no education,” said Kerry, adding that one consequence of this is the extremism that is now common in the world.

Former U.S. Secretary of state added that this is a global challenge that humanity faces.

Due to global warming, melting ice and pollution of the oceans, the planet was on the brink of disaster. But all this can be solved, said the politician.

“No problem, with no solution. The solution to climate change called energy efficiency,” – Kerry added that you just need to make the right choices, and future investment in green energy.

According to Kerry, Sergei Lavrov, foreign Minister of Russia, turned out to achieve success in negotiations. An American politician said that in 2013, when he said that to prevent strikes on Syria’s Bashar al-Assad must hand over 1,300 tonnes of chemical weapons, Lavrov called him and offered to help.

Read also: Kerry: UN Peacekeepers should be on the Ukrainian-Russian border

“Then we prevent the ingress of arms into the hands of terrorists of the Islamic state and its further use in Paris or any other Western capital”, – said Kerry.

He added that, despite disagreements with the Bay, they managed to make the Paris climate agreement and the Iranian nuclear deal. Kerry noticed that that’s what diplomacy is. “It is an art that helps to build relationships between countries and to protect the interests” – he stressed.

The question of the Crimea and Donbas

To the question “Who will return Crimea to the Ukraine?” Kerry said: “Crimea is Ukraine. Only in the minds of Russians and Putin it belongs to another country.”

The politician stressed that the US does not support the annexation of Crimea and hope that the situation will be resolved. He also recalled that there are the Minsk agreements and the Normandy format, which should help to resolve the conflict in the Donbas.

“We need to continue the negotiations in Minsk and Normandy formats,” said Kerry.

We also recall that in Kiev on 14-16 September is the Yalta European strategy (Yalta European Strategy, abbreviated as YES forum) is an annual conference organized by the Victor Pinchuk Foundation.

The conference gathers the most influential politicians and businessmen of Ukraine and the world, it has been held annually since 2004. John Kerry also became one of the participants in the forum YES-2017.