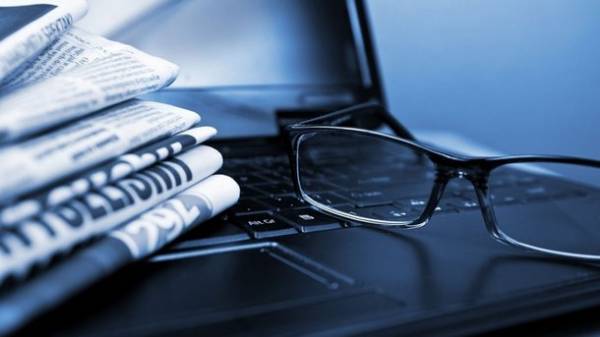 27 times over the past day the militants of illegal armed groups fired at positions Armed forces of Ukraine, injuring two servicemen, the press center of staff ATO.

17 thousand UAH is from September 1 the wages of an ordinary soldier with the rank of “soldiers” that perform tasks in the ATO area, according to the Ministry of defence. 7 th – basic cash security, 10 thousand UAH – for an additional charge. In addition, if soldiers are directly involved in the fighting, or destroyed equipment of the enemy, paid the premium.

23 guilty verdict handed down by the courts, the SBU, which “earned” on business, 55 it is reported about suspicion, said the head of the secret service, Vasyl Hrytsak.

40 billion the government next year will allocate to the budget of the newly established road Fund, said Prime Minister Vladimir Groisman. Sources of funding will be the resources of the road Fund, decentralization and fulfillment of the plan on customs revenues.

14,184 billion made on September 1 financial resources of the Fund Deposit guarantee, which is 4.1% less than the figure for August 1. Compared with the figure at the beginning of the year current resources less than 1.1 billion, or 7.4%.

49265 explosive objects
seized and destroyed the pyrotechnics of the State service for emergency situations since the beginning of this year.

For a total amount of 32 million UAH have made the cancellation of tenders for last week, from 4 to 8 September, the Department of protection of economy of the National police. Violations, which were cancelled the results of the auction included the Nonconformance documentation with the technical requirements of the tender, the overstatement of purchases and other.

Increased by 8.7% in January-June in annual terms, the number of tourists who come to Ukraine, to 6.3 million people. Are published the Ministry of economic development and trade on the basis of the analysis of the data of the State border service. The Ministry said that the world tourism organization of the United Nations refers to the number of tourists individuals who crossed the border from official, business, private, religious purpose and also for tourism and education, cultural and sport exchanges, transit and more. Most tourists in the first half came from Moldova (2,013 million), Belarus (1,048 million) and Russia (620 thousand).

An increase of 27% , the regional development Ministry forecasts next year’s average cost of construction of 1 sq. m of total area of apartments compared to 2017 year – on-year to 12.2 thousand UAH.

Increased 1.4% in January-September in annual terms, the Ukrainian enterprises of steel consumption – up to 3 million to 19.9 million tonnes, announced the Association “Ukrmetallurgprom”. The consumption of steel products of Ukrainian production fell by 3.6%, to 2,204 million tons, while import increased by 17.9% to 815,9 thousand tons.

922,2 million UAH were attracted to the Ministry of Finance to the state budget on a scheduled weekly auction on placement of bonds of internal state loan (government bonds). 911,7 million UAH was raised from the sale of hryvnia bonds with a maturity of 3 years with a weighted average yield of 14,53% per annum, 10.5 million UAH bonds for a period of 1 year with a yield of 14.35% per annum.

Exceeded $20 trillion debt of the US government – it happened for the first time in history. Recently, the U.S. Senate approved the allocation of additional funds in the amount of $15,25 billion for liquidation of consequences of hurricane “Harvey” and allowed to raise the borrowing limit of the Federal budget.

All 15 members of the UN Security Council approved a resolution on introduction of additional sanctions against North Korea. It provides restriction on the purchase by Pyongyang of oil and petroleum products, a ban on supplying the country with liquefied natural gas and gas condensate. Set full ban on the export from North Korea of textile products. All countries are forbidden to issue new work permits for workers from the DPRK.

In the first place in the list of largest financial centers of the world remained in London, despite Britain’s decision to leave the EU, which could adversely affect the development prospects of the banking sector, says the review of the financial consulting company Z/Yen Group. New York, though, and retained second place, lost 24 points and increased the gap from the British capital to its highest level since 2007. Experts attribute this to the concerns of U.S. trade with other countries because of the policies of President Donald trump. Third place was taken by Hong Kong, surpassing Singapore. Tokyo remained in the fifth position. The top ten also includes Shanghai, Toronto, Sydney, Zurich and Beijing, with the Chinese capital rose just 6 points.

At least 20 billion euros, plans to invest the world’s largest carmaker Volkswagen in the development of new electric vehicles and by 2030, to submit to elektroversiya all of their models. Another German manufacturer Daimler promised that by 2022 will offer all-electric versions of all Mercedes-Benz vehicles.