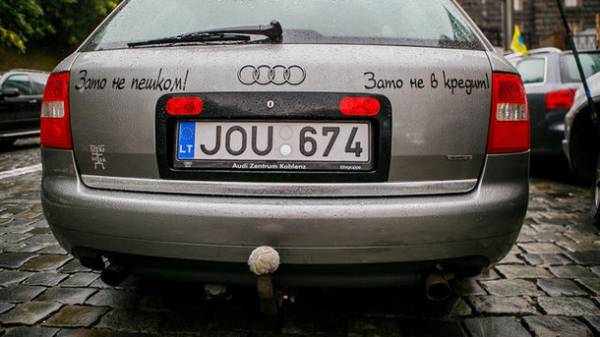 The situation with the cars on avtonomera imported to Ukraine without paying taxes, becoming more intense. Yesterday, Parliament began a protest of their owners, which promise to make open-ended (a report about it, see below). What could be the solution to the problem, to understand “Today”.

THE EXPENSE OF THE TENS OF THOUSANDS. According to the State fiscal service, now almost 64 thousand cars with foreign registration are in Ukraine with violation of period of stay or they go, those who by law has no rights — citizens of Ukraine by proxy. This is approximately 1% of the total number of private vehicles in the country. From 2015, the customs officers composed of more than 31 thousand reports of violation of the terms transit and temporary importation, imposed fines on 206,5 million.

ACCIDENTS AND THE ENVIRONMENT. Authorized dealers and importers of cars are cheap cars, but on the condition of the civilized automotive market.
“The legalization of tax-free import of cars with foreign registration creates unequal conditions for Ukrainian citizens”, — said the “Today” Advisor to the Chairman of the Federation of employers of the automotive industry Olena Chepizhko. According to her, in fact we got the duality of the state system, where some citizens pay all the taxes, while others use loopholes in the law.

“Uncontrolled import of foreign cars with foreign registration creates huge problems: the growing number of road accident with participation of cars with foreign numbers, the development of the black market, the deterioration of the environmental situation,” says Chepizhko.

The VR has registered two bills designed to resolve the situation with cars in foreign rooms, but, according to experts, they do not solve the problem globally. One proposes to allow the registration of such a car without paying duty, the second is to introduce a fee for the stay at the rate of 2 euros per day with unlimited duration of stay. “One of the ways a solution may be a one-time Amnesty vehicles corresponding to ehkonorm Euro-5, the installment payment of the duty,” suggests the expert.

EXPERTS. Avtoekspert Alex Mkrtchyan told “Today” that now, when the expense of such machines, went for tens of thousands, the government has let the situation out of control. “If you release them from the import taxes, it will cause outrage law-abiding citizens who bought a foreign car, honestly settled with the Treasury,” says auto expert. Lawyer Vadim Volodarsky sees the danger of cars on avtonomera in the fact that after a serious accident, the perpetrators simply abandon them and hide, because this car was bought for little money (1-3 euros). And since it is not on the account in Ukraine, to identify who was driving, impossible.

HOW PROTESTED. Yesterday, the Central street of Kiev was paralyzed. The drivers stood in the huge traffic jams that are caused by used cars foreign numbers. The owners who bought on the cheap and not pay for import fees, staged a rally for the legalization of their cars. The owners of the machines on avtonomera required deputies taking the law in their favor. Their opponents say the lack of responsibility of such drivers on the junk, use banned in EU environmental standards, and the fault of the state not regulated a loophole in the law and not reduce the cost of customs clearance cars to become more affordable.

REQUIREMENTS. Despite bad weather, early in the morning in front of Parliament was restless. About 500 members of the public organization “Auto Euro Force” has begun an indefinite, according to them, the action “For customs clearance is available to every Ukrainian”. Their cars on avtonomera protesters blocked the entire government district — the square street Hrushevskoho, Shovkovychna and Instytutska street and in the square before the Parliament gathered a small stage.
“We must show our determination to the authorities, so we will be until they meet our demands,” said the leader of the organization Oleg Yaroshevich.

Protesters demanded a reduction in the cost of customs clearance, legalization of all cleverly imported into Ukraine cars from Europe, termination of the “repression of the security forces against drivers on avtonomera”, and even the abolition of the environmental standard Euro-5 for cars. The majority of the protesters — male 25-40 years. Their interests they defended with slogans: “Stop bullying people”, “cheap clearance!”, “Discrimination against Ukrainians.” Square set with a dozen barrels, in which participants from time to time knocked.

As told “Today” protesters Denis Kononenko, he and his friends are here from 6:00. The action attracted the attention of outsiders. Kiev Vadim fistula confessed to “Today” that has nothing to do with “Auto Euro Force”, but supports them. “I don’t have a car, but plan on buying. Of course, not in Ukraine will be cheaper. I believe that all the requirements of the protesters are legitimate,” he said.

But the driver Valery Lozovoy stuck because of the protesters of illegal immigrants in traffic in his car with Ukrainian registration, outraged: “to Demand the legalization of such machines is still illegal to purchase weapons and to require him to register on the grounds that you’ve already bought it. Where are the authorities?!” The action was guarded by the police, the MPs, the protesters did not.