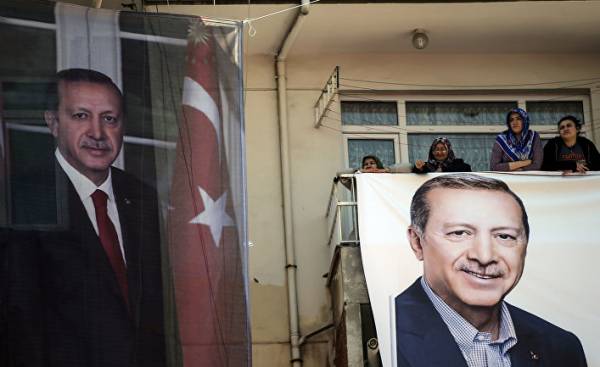 Erdogan, less than two weeks ago, winning the constitutional referendum designed to give him unprecedented powers, said that the decision of the parliamentary Assembly of the Council of Europe (PACE) to return to Turkey under intensive supervision — “purely political” and Ankara does not recognize it.

PACE said that resumes monitoring of the situation in Turkey because of the purges that followed a failed coup attempt last year, human rights violations and concerns about concentration of power in the hands of Erdogan.

Turkey’s relations with the EU worsened after Erdogan compared with Nazi-Germany and the Netherlands, banned his supporters to speak to the local Turks on the eve of the referendum.

“In Europe, the situation became very serious from the point of view of the scale of Islamophobia. EU closes the door to Turkey and Turkey no one closes the door,” he said, showing photographs of the victims of the vandalism of mosques, and also of the speeches of supporters of Kurdish rebels who have been demonstrating against him in Europe.

“If they won’t work sincerely, we will have to find a way out. Why do we have to expect next? Negotiations have been going on for 54 years,” said Erdogan, referring to the signed in 1963 agreement, to recognize the long-term goal of the accession of Turkey to the United Europe.

According to Erdogan, if need be, Turkey could hold a vote on EU membership, similar to the British referendum, Brexit because it gave Britain the “peace of mind” and opened the way “to a new future”.

This week, the legislators of the EU and foreign Ministers of the bloc will discuss the issue of relations with Turkey.

“I am very interested to know, how to act the EU”, — said the Turkish leader, criticizing the countries-members of the bloc, which called for an end to the accession negotiations with Turkey.

According to him, Turkey still remained committed to the negotiations.

“We are ready immediately to do everything they ask. Anything you want. But they still keep us at the threshold,” he said.

Erdogan drew attention to the presidential elections in France and the threat of the far-right candidate marine Le Pen to bring the country out of the unit and said that the EU “on the verge of collapse”.

“One or two countries will not be able to save the EU. You need a country like Turkey is a different country, symbolizing a different faith… But the countries-EU members, it seems, do not understand. It seems very difficult to accept a Muslim country such as Turkey,” he said.

The situation in Syria

Europe, according to Erdogan, did not appreciate the role of Ankara in curbing the flow of migrants from neighboring Syria and Iraq, while the burden was on Turkey and other countries in the region, including Lebanon and Jordan.

The Turkish leader said that the Syrian conflict cannot be resolved until President Bashar al-Assad remains in power.

“Assad is not the way to resolve the conflict in Syria,” said Erdogan, expressing disappointment at the failure of the international community to force the Syrian leader to leave.

“He’s attacking their people with tanks, artillery, barrel bombs, chemical weapons, fighter jets. Do you think he will be able to help resolve the crisis?”

Erdogan also hinted at weakening Russia’s support of the Syrian President. According to Turkish leader, President Vladimir Putin told him: “erdoğan, don’t get me wrong. I’m not a defender of Assad, I’m not his lawyer.”

Russia’s intervention in the Syrian conflict in 2015 tipped the balance of power in favor of Assad, who is also supported by the opponents of Turkey in the region of Iran. Turkey is a member of the U.S.-led coalition to combat “Islamic state” in Syria and Iraq.

(Samia of Nakul, Nick Tattersall and Orhan Coskun, with the participation of the Tuvan Gumrukcu and Tulay Karadeniz. Translated By Marina Bobrova)