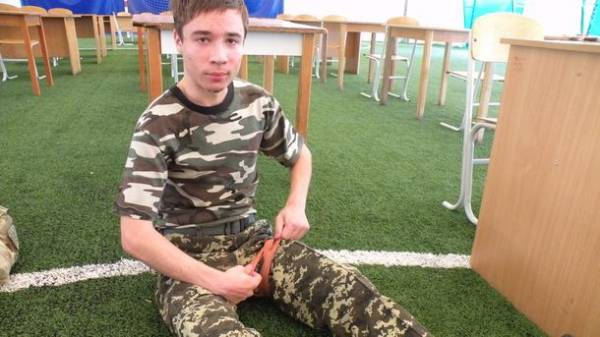 Here is the second week could not establish the whereabouts of the missing Belarusian Ukrainian Pavel Mushroom. According to the family and lawyer of a 19-year-old boy, what happened to him is a forced disappearance, which involved the Federal security service (FSB) of the Russian Federation. We will remind, on August 24, the Mushroom went to the city of Gomel (Belarus), but home and never returned. Representatives of the Ukrainian claim that there is reason to believe that he held it by the Russian intelligence services and appealed to the European court of human rights (ECHR), a statement on the application of urgent measures against this situation. 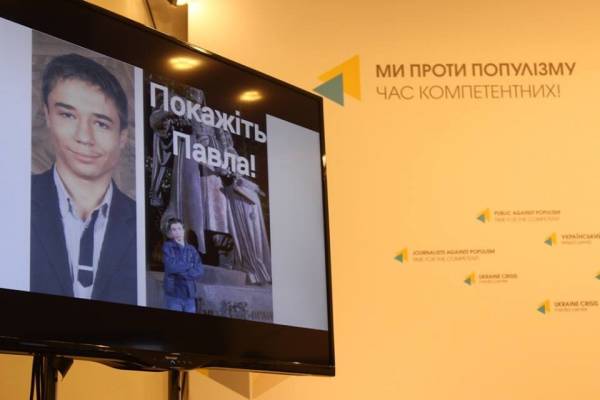 Family and lawyer Paul Mushroom demand from the Russian Federation to provide full information about his whereabouts and state of health. Photo: facebook.com/DPSUkraine

Paul the Mushroom went to meet with a girl

24 Aug Paul the Mushroom went from Chernigov in the Belarusian Gomel on the bus. There, he was going to meet a girl with whom previously communicated in social networks. Back he had on the same day, said the father of the missing boys Igor Mushroom.

“We agreed that 24 the number it needs to go back to Chernigov and, when crossing the border, turn on the phone and to tell me which bus goes to I met him in Chernigov. But, after waiting for him the whole night until the 25th in the morning, seeing that no one is contacted that I was constantly dialed his phone and in the network he did not show up, I realized that I needed to go to look for him in the city of Gomel”, – he said.

According to Igor Grib, August 25, he submitted a statement to the police of Chernihiv and went to Gomel on the same route by which drove his son. On the same day he contacted the Ukrainian border guards, who told him informally that Paul the Mushroom on the territory of Ukraine on August 24-25, not drove.

Arriving in the evening in Gomel, at the bus station he asked the police officers introduced themselves and announced that is looking for his son.

“Then when I on the tablet the Belarusian officer typed data my son and then, as he sat on the seat beside me, I saw that highlighted the following information: Mushroom Paul I. 01.07.1998 year of birth is wanted on article 205 (terrorism) of the criminal code. The initiator of search is the FSB of the Russian Federation for the Krasnodar Krai city of Sochi”, – he told.

Back in Ukraine, the young man’s father asked his friends to verify the information as to whether the passengers of the bus which was driving Paul reached the city of Gomel. The bus driver confirmed that all citizens of Ukraine, who left the checkpoint “Novi yarylovychi” in Ukraine, successfully passed the border control at the Belarusian border crossing point “Novaya Guta”, boarded the bus and drove to all destinations.

“So I came to the conclusion that, as the Belarusian border guards have not lifted Paul in the checkpoint “Novaya Guta” in violation of the requirements of the regulations on border control, so they missed it. If the guards someone pass, respectively, from someone they have received the appropriate command, – said Igor Grib, – That is, the guards have received the relevant command to pass Paul on the territory of the Republic of Belarus. Thus, from the testimony of the driver it is clear that he reached the city of Gomel, came, and there his traces disappear.” 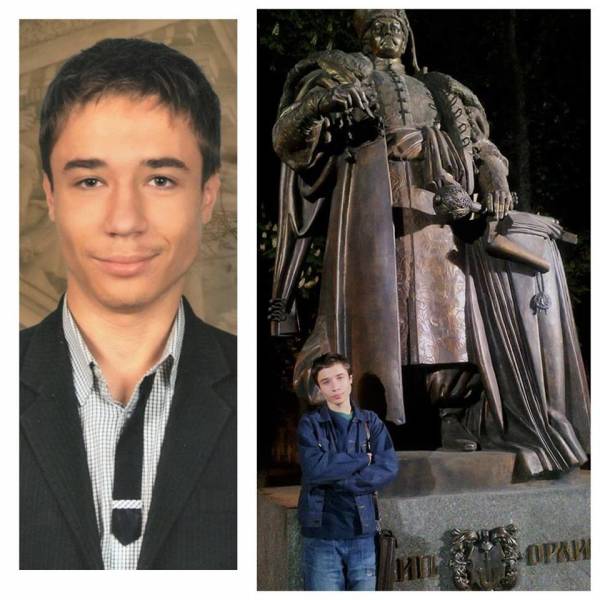 As for the girl, to which Paul was sent, the information about whether he met or not, is not yet available. According to his father, who came into the correspondence of Paul in social networks, they negotiated and agreed on a meeting place in Gomel. Thus, the last three months of their correspondence was wearing a romantic character, he said.

“Beyond words “Glory to Ukraine – Heroes of Glory” there are no political statements, slogans, appeals were not there. Everything was in a romantic style,” he said.

However, to date, the Ukrainian law enforcement agencies this girl is not questioned, and that if she cooperated with the Russian side, is unknown. According to the lawyer Evgenia Zakrevskaya, she or the person who claims to be a girl texted Paul Mushroom, in a conversation with media representatives described what he was wearing guy.

“Why do we believe that the FSB is involved in this kidnapping? First, we have the bare facts: there is a border crossing from the Ukrainian side confirmed that, crossing the border from Belarus, confirmed. In addition, said Igor Grib at the time when the checkpoint hits and the border guard sees that this man is wanted, there is a direct, immediate notification of the initiator of search. That is since when Paul Mushroom appeared at the checkpoint, the FSB knew he was there. Further actions of the border service was obviously coordinated by the FSB. Further accommodation and the movement of Paul in the territory of Belarus are obviously under the control of the FSB, says Zakrevsky is the Second time that the girl is the one who pretends to be a girl texted Paul confirms the fact that the meeting took place at the initiative of the FSB. Can we believe her, we could not believe it, but we should note one point: in a conversation with a journalist this girl exactly describe what he was wearing Paul. So, either she saw him or she is announced. This information in the public space until it was not. It gives a very good reason to believe that the FSB has initiated, organized and implemented that enforced disappearance”.

19-year-old boy with disabilities took in “working out” due to social media posts, says father

As told by sister Paul of the Fungus Olga, he was interested in the topic of human rights, illegal arrests and confinement of citizens of Ukraine on the territory of Ukraine, and in Russia, problems of development and formation of Ukraine as an effective international actor.

“He said that in social networks,” she said.

The young man’s father is also sure that the reason that the Russian intelligence services took to “develop” his son began his publications in social networks. According to Igor Grib, Paul painfully perceived recent events in Ukraine and adhered to a pronounced Pro-Ukrainian position.

“I think that already at that time some post and write it in Vkontakte interested in it security services of the Russian Federation”, – he said.

According to father, 19-year-old boy was not involved in any of the military units and not traveled abroad in 2012. Moreover, according to Igor Grib, who is a reserve officer of the State border service of Ukraine in 2015-2016, he served in its ranks in the fourth wave of mobilization, 25 August in search of his son he came to Belarus and left her, so he suggests that Russian secret services interested in personal Paul.

To set the location of the guy family members and human rights activists can not have 12 days. According to its representatives, this situation is very dangerous for his life because Paul congenital malformation – cavernous transformation of the portal vein and portal hypertension.

“We are talking about the fact that the wrong man is the blood flow to all internal organs suffer from all the internal organs. Develop chronic diseases other pathologies. If you will apply any physical violent attempts of influence on my brother, it can lead to irreversible consequences, because he needs personal care and normal conditions of stay,” he told his sister Olga.

Family and advocates of the missing young men applied to the ECHR concerning the application of urgent measures, said the lawyer Evgenia Zakrevskaya. According to her, representatives of Paul believe that the Russian Federation violated such rights Pavel Mushroom as the right to liberty, the right not to be tortured, and there is a direct threat to his life. In portal hypertension in 90% occur dilatation of the esophagus, stomach and intestines. 30% it is complicated by the bleeding. Mortality after the first case of bleeding is 30-50%. That is, if for any reason such as the lack of a long time proper medical care, medication, medical supervision, can develop bleeding. Other causes may be improper diet or physical violence, said Zakrevsky.

“Paul Mushroom as a hostage to Russia is very wrong. It should now be released. If there were any plans for it exchange or something like that, need it right now to implement because the threat to life is straight and very high,” said Zakrevsky.

Moreover, family and lawyer Paul Mushroom handed to the Prosecutor General of the Republic of Belarus, to regional management of MS in the Gomel area the statement for abduction of the citizen of Ukraine they Also appealed to the public oversight Commission of the Russian Federation to find out the whereabouts of Paul and gave a statement to the head of the Council for human rights of the Russian Federation. They also handed in a petition to the Commissioner for human rights Valeria Lutkovska with a request to send a representative to Krasnodar to check the possibility of retaining Paul in that city in prison by the FSB. The family and lawyers sent a statement to the International Committee of the red cross and appealed to the international community, the EU, UN and OSCE.

“To find the son I had written all the relevant statements in the appropriate law enforcement authorities of Ukraine. To date, we have only two official documents – the response from the state border service of Ukraine concerning confirmation of the departure of Paul 13.03 24 August on the territory of Belarus, and confirmation of border agencies of the Republic of Belarus on the crossroads at 14.23 on entry into the Republic of Belarus Pavel Mushroom. And they confirm that he crossed the checkpoint “Novaya Guta” – said the father of the young man.

According to human rights lawyer Eugenia Zakrevskaya, Belarus should take all measures to ensure that Paul found. According to her, the Belarusian side can conduct the most effective investigations. Also on 31 August, a petition was submitted to the Investigative Committee of the Russian Federation, but no answer, she said. However, the moment any confirmation or denials from the government about what Paul Mushroom is there.

In addition, the lawyer and the family of Paul demand to know what charges he is charged with and what the condition of his health, and also provide him access to appropriate treatment, the Ukrainian Consul and independent counsel.

“The main requirement for Russia at the moment – to tell us where Paul, to show him alive and healthy, provide it with medical care, access to a lawyer and, of course, to return to Ukraine,” said Zakrevsky.

From the authorities of Belarus, the representatives of the missing Ukrainian demand to ensure proper investigation and full cooperation with Ukrainian law enforcement agencies, to provide the General Prosecutor of Ukraine with all the necessary information, videos, names, and indications of law enforcement and other materials, and provide information on procedure of interaction between the Belarusian border guards and Federal security service of Russia in case of border crossing by persons, who are in search of the FSB. Moreover, they urge the government of Ukraine to ensure a proper investigation of the incident and use all the statutory tools of international cooperation between Ukraine and Belarus for information regarding the circumstances of the disappearance of the Fungus.

Representatives of Paul asking the international community and organizations to demand from the Russian Federation to provide full details about Pavel Mushroom.